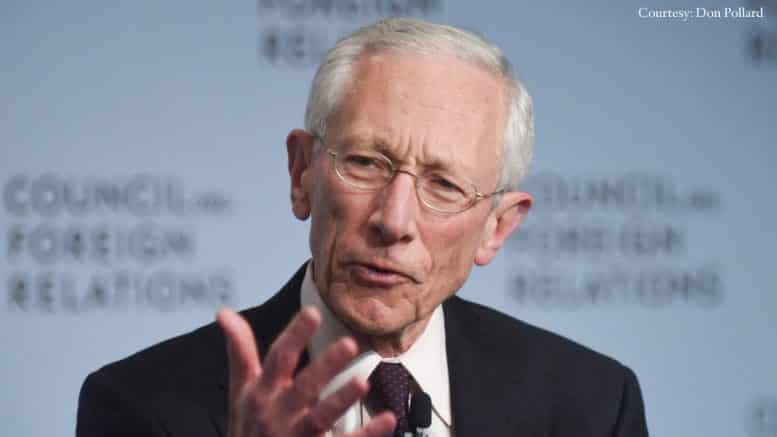 The Economist declares that Trilateral Commission member Stanley Fischer is a Technocrat and that ‘Technocracy is in retreat’ after his retirement as vice-chairman of the Fed. In that The Economist (UK) has long been a mouthpiece for globalization and the Trilateral Commission in particular, their article is designed to be mentally disruptive and misleading on the progress of Technocracy. Truly, Fischer is the consummate Technocrat, but his presence on the world stage only proves that Technocracy is the goal of members of the Trilateral Commission. Are they all of a sudden impotent little puppies? No, they are closer to their endgame of total domination than ever before. ⁃ TN Editor

In 2004 Stanley Fischer described the wonder he felt as an economics student in the 1960s. “You had a set of equations”, he said, “that meant you could control the economy.” Technocracy—the dream of scientific government by a caste of wise men—arose in the 20th century, as rapid change rendered the world unfathomably complex; in economics, it came of age in the Keynesian revolution of the 1930s. On September 6th, after a remarkably distinguished career in public service, Mr Fischer, an intellectual heir to Keynes, announced his imminent retirement as the vice-chairman of the Federal Reserve. It is tempting to see in his departure the end of the era and the ideal of technocracy.

A century ago, as physicists unlocked the secrets of the atom and biochemists probed the molecular basis of life, economists sought to systematise their own field. But the growing complexity of their work created a problem: laymen could not make head or tail of it. Government consultation with experts, or the delegation of authority to them, became critical to the management of the economy. War-time state planning empowered technocrats further. And in the years after the second world war, when Mr Fischer was a boy in what was then Northern Rhodesia (now Zambia), technocratic principles were enshrined in extragovernmental institutions like the World Bank and the IMF, and in panels of economic advisers whose systems of Keynesian equations produced forecasts and shaped policy.

These systems were flawed. Trouble struck in the 1970s. Slowing growth, wobbling currencies and rising inflation upset the status quo and bolstered sceptics of Keynesian ideas, like Robert Lucas. A dose of stimulus might fool people into thinking the economy was doing better than it was, and so into working harder—but only for a while. People would catch on, and inflation rather than growth would result.

Mr Fischer questioned this fatalism and, in so doing, helped make the intellectual case for revitalising technocratic management. That work was centred on the Massachusetts Institute of Technology (MIT), the home of economic luminaries like Paul Samuelson and Rudiger Dornbusch and the theories that would become New Keynesianism. There, Mr Fischer and others explored when a deft intervention could do some good. In 1977, for instance, he argued that long-term contracts prevented prices and wages from adjusting quickly to changes in economic fortunes. Such frictions could lead to soaring unemployment unless trained economists were on hand to tend the government’s policy levers. New Keynesianism became the orthodoxy in central banks and finance ministries around the world.

A parade of economic talent came to work with and learn from Mr Fischer. They included Ben Bernanke, who would later lead the Federal Reserve through the financial crisis; Mario Draghi, who now pilots the European Central Bank (ECB); Olivier Blanchard, until recently chief economist at the IMF, as well as his successor, Maurice Obstfeld. These men helped build modern macroeconomics, then went out into the world to apply it.

In that, they followed the example of Mr Fischer. In the late 1980s he joined the World Bank as chief economist. He could draw on his research on economic growth—and the policy errors that could waylay it. Later he became the deputy managing director of the IMF, putting him at the centre of battles to contain the financial crises that punctuated the 1990s. After a turn at Citigroup, he went to run the Bank of Israel, navigating the Israeli economy through the Great Recession. Then, in 2014, Barack Obama nominated him for the vice-chairmanship of the Fed.