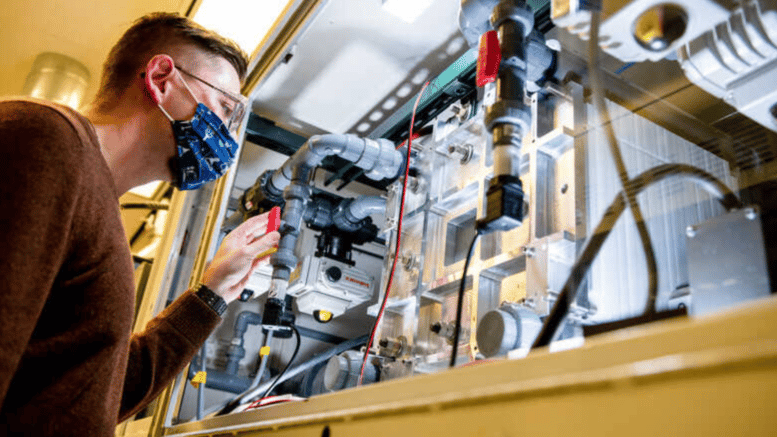 Please Share This Story!
PDF 📄
Professor Antony Sutton was famous for his work on the transfer of technology from the West to the Eastin the 1960s and 1970s. Nothing has changed. Technocrat birds of a feather, stick together. There is no ethical or moral dilemma for Technocrats giving our best inventions to China because it is already a Technocracy. ⁃ TN Editor

When a group of engineers and researchers gathered in a warehouse in Mukilteo, Wash., 10 years ago, they knew they were onto something big. They scrounged up tables and chairs, cleared out space in the parking lot for experiments and got to work.

They were building a battery — a vanadium redox flow battery — based on a design created by two dozen U.S. scientists at a government lab. The batteries were about the size of a refrigerator, held enough energy to power a house, and could be used for decades. The engineers pictured people plunking them down next to their air conditioners, attaching solar panels to them, and everyone living happily ever after off the grid.

“It was beyond promise,” said Chris Howard, one of the engineers who worked there for a U.S. company called UniEnergy. “We were seeing it functioning as designed, as expected.”

But that’s not what happened. Instead of the batteries becoming the next great American success story, the warehouse is now shuttered and empty. All the employees who worked there were laid off. And more than 5,200 miles away, a Chinese company is hard at work making the batteries in Dalian, China.

The Chinese company didn’t steal this technology. It was given to them — by the U.S. Department of Energy. First in 2017, as part of a sublicense, and later, in 2021, as part of a license transfer. An investigation by NPR and the Northwest News Network found the federal agency allowed the technology and jobs to move overseas, violating its own licensing rules while failing to intervene on behalf of U.S. workers in multiple instances.

Now, China has forged ahead, investing millions into the cutting-edge green technology that was supposed to help keep the U.S. and its economy out front.

Department of Energy officials declined NPR’s request for an interview to explain how the technology that cost U.S. taxpayers millions of dollars ended up in China. After NPR sent department officials written questions outlining the timeline of events, the federal agency terminated the license with the Chinese company, Dalian Rongke Power Co. Ltd.

Several U.S. companies have tried to get a license to make the batteries

The department is now conducting an internal review of the licensing of vanadium battery technology and whether this license — and others — have violated U.S. manufacturing requirements, the statement said.

Forever Energy, a Bellevue, Wash., based company, is one of several U.S. companies that have been trying to get a license from the Department of Energy to make the batteries. Joanne Skievaski, Forever Energy’s chief financial officer, has been trying to get hold of a license for more than a year and called the department’s decision to allow foreign manufacturing “mind boggling.”

“This is technology made from taxpayer dollars,” Skievaski said. “It was invented in a national lab. (Now) it’s deployed in China, and it’s held in China. To say it’s frustrating is an understatement.”

The idea for this vanadium redox battery began in the basement of a government lab, three hours southeast of Seattle, called Pacific Northwest National Laboratory. It was 2006, and more than two dozen scientists began to suspect that a special mix of acid and electrolyte could hold unusual amounts of energy without degrading. They turned out to be right.

It took six years and more than 15 million taxpayer dollars for the scientists to uncover what they believed was the perfect vanadium battery recipe. Others had made similar batteries with vanadium, but this mix was twice as powerful and did not appear to degrade the way cellphone batteries or even car batteries do. The researchers found the batteries capable of charging and recharging for as long as 30 years.

Gary Yang, the lead scientist on the project, said he was excited to see if he could make the batteries outside the lab. The lab encourages scientists to do just that, in an effort to bring critical new technology into the marketplace. The lab and the U.S. government still hold the patents, because U.S. taxpayers paid for the research.

In 2012, Yang applied to the Department of Energy for a license to manufacture and sell the batteries.

The agency issued the license, and Yang launched UniEnergy Technologies. He hired engineers and researchers. But he soon ran into trouble. He said he couldn’t persuade any U.S. investors to come aboard.

“I talked to almost all major investment banks; none of them (wanted to) invest in batteries,” Yang said in an interview, adding that the banks wanted a return on their investments faster than the batteries would turn a profit.

He said a fellow scientist connected him with a Chinese businessman named Yanhui Liu and a company called Dalian Rongke Power Co. Ltd., along with its parent company, and he jumped at the chance to have them invest and even help manufacture the batteries.

At first, UniEnergy Technologies did the bulk of the battery assembly in the warehouse. But over the course of the next few years, more and more of the manufacturing and assembling began to shift to Rongke Power, Chris Howard said. In 2017, Yang formalized the relationship and granted Dalian Rongke Power Co. Ltd. an official sublicense, allowing the company to make the batteries in China.

Any company can choose to manufacture in China. But in this case, the rules are pretty clear. Yang’s original license requires him to sell a certain number of batteries in the U.S., and it says those batteries must be “substantially manufactured” here.

In an interview, Yang acknowledged that he did not do that. UniEnergy Technologies sold a few batteries in the U.S., but not enough to meet its requirements. The ones it did sell, including in one instance to the U.S. Navy, were made in China. But Yang said in all those years, neither the lab nor the department questioned him or raised any issues.

Typical. Is he kin to Madeleine Albright? She gave American technology to China in the subsequent decade. Those who knew what she was doing brought her actions to the public, but it was already done. Basically, she sold us out.

If this kind of battery really works at scale doesn’t that evidence make Elon Musk a propagandist? A creator of diversions?

To me the taxpayers still have a vested monetary and ownership interest in the patents and technology. I believe the law that allows the inventions created by government employees using taxpayers dollars to be a breach of not only an ethical standard but a long help principle that employees do not have any ownership rights unless the employer, in this case the taxpayers, grant them consent. It is not the right of Congress to give away the money owed to the taxpayers who paid for the research and development for the majorities benefit. If the Congress want to use their… Read more »

This concept of “rules”, “laws”, etc. is indeed a nebulous one. Think for a second, in order for there to be a game called basketball, that we recognize as basketball, people need a ball of the sort used in the game, goals, and what else? Rules, right? That’s basketball. But take away the rules, and let’s say someone takes the ball and just runs with it and doesn’t dribble. The referee calls it a walk/travel. What if EVERY player did the same thing, no dribbling? Is that sitll basketball? You might say “no”. But it is, if they choose to… Read more »