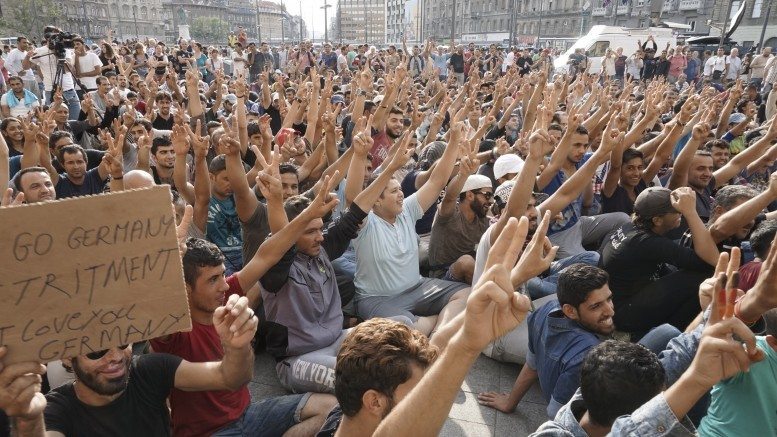 The United Nations on Monday proposed that its member countries create and agree upon a system to share responsibility more fairly for the hundreds of millions of refugees and migrants around the world.

The global compact would be accompanied by a U.N.-led campaign to combat the xenophobia and racism that have tainted discussions of the refugees and migrants, U.N. officials said at a briefing to release a report on the global migration.

The U.N. estimates there are 20 million refugees worldwide and another 40 million people displaced inside their own countries. Of the refugees, 86 percent live in developing countries, often near the countries they came from, it says.

Added to those figures are 244 million migrants who live and work in countries where they were not born, it says.

The campaign would attempt to counter an increasingly negative attitude and tone in debates over how to deal with the crisis, the U.N. said.

“I am concerned at the increasing trend of member states to erect fences and walls,” U.N. Secretary-General Ban Ki-moon said in the report.

“Xenophobic and racist responses to refugees and migrants seem to be reaching new levels of stridency, frequency and public acceptance.”

The proposals come ahead of a summit meeting planned at the U.N. in September to address the global refugee crisis.

NO! Quit trying to use discrimination as a newer tactic in the same old “I’m/We are going to rule the world” carp (deliberate miss spell). America is a sovereign nation under the US Constitution, and the ONLY immigrants we want here are those who want to BECOME Americans. WE decide who is welcome, NOT those that SERVE WITHIN our governments, and despite all the actions and poisons given to make “dumb animals” of us to bend to your will, it is NOT going to happen. What will happen this time is we will prosecute you and when found guilty we… Read more »

Then, added to our US Constitution and each state’s Constitution as the supreme law and highest laws of our land, there is this: President Truman pushed through the Federal Immigration and National Act of 1952 through Congress. Within it says – Section 8 USC 1324[a](1)(A)[iv][b](iii)that any US citizen that knowingly assists an illegal alien, provides them with employment, food, water or shelter has committed a felony. What this means is that knowingly or unknowingly those who serve as officials within the City, county or State who declare their jurisdictions to be “Open Cities, Counties or States are subject to arrest;… Read more »

I wonder if Al Gore would welcome the refugees in his mansions. Or Clinton, Obama, Brzezinski, the Royals etc. Why don’t they set the example and adopt 10 refugees each? Or even one? Let their kids marry some of them and have “new children”. Et coetera.

I’m from Brazil, so my country is already gone. I’m just observing your fight against this monster, already successfully operating here. No optimism, I’m afraid, but I truly hope YOU can succeed. Go Americans!