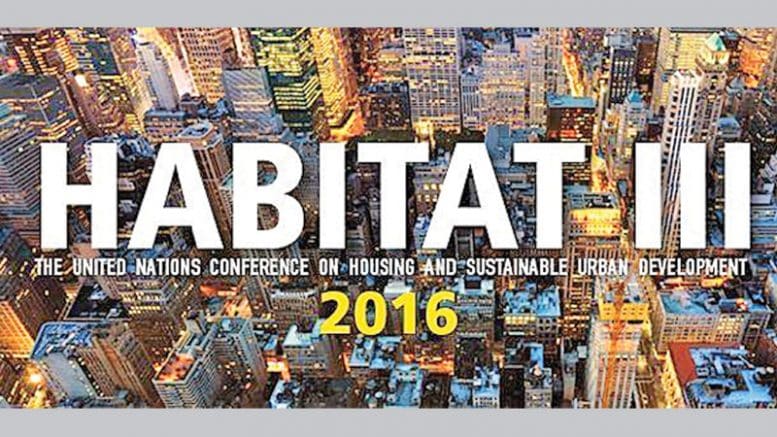 The UN fears that its new Habitat III/New Urban Agenda will quickly fall behind, prompting an even higher level of urgency and oversight. The New Urban Agenda and ‘UN Urban’ will be the most direct driver of implementing Technocracy (aka Sustainable Development) on over 50% of the world’s population. ⁃ TN Editor

A high-level review panel tasked with reviewing the role and mandate of the UN Human Settlements Programme (UN-HABITAT) has proposed strengthening UN-HABITAT and establishing an independent coordinating mechanism, ‘UN-Urban’. The panel is also calling for UN-HABITAT to have a new governance structure based on universal membership, a small Policy Board, formal involvement of local authorities and subnational governments, and partnerships with marginalized groups.

The High-Level Independent Panel to Assess and Enhance the Effectiveness of UN-HABITAT was mandated by the UN General Assembly (UNGA) (A/RES/71/256) and appointed by the UN Secretary-General to conduct an independent and objective review of UN-Habitat, with a view to enhancing its effectiveness, efficiency and accountability.

The report, titled ‘Report of the High Level Independent Panel to Assess and Enhance Effectiveness of UN-HABITAT,’ recognizes the challenges posed for UN-HABITAT and the wider UN system in implementing the 2030 Agenda for Sustainable Development and the outcome of the UN Conference on Housing and Sustainable Urban Development (Habitat III) the New Urban Agenda (NUA). It acknowledges the UN systems’ failure to adequately acknowledge the important role of local government and other local actors in urban development in the past, and agrees that UN-HABITAT’s funding has been insecure and limited, leading it to stray from its role in the quest to raise financing.

The panel proposes the establishment of UN-Urban as a mechanism to convene all UN agencies and partners working on urban sustainability issues, similar to the role played by UN-Water and UN-Energy. The panel also calls for action to “save, stabilize and rapidly strengthen” UN-HABITAT to equip it for the challenge of implementing the 2030 Agenda and the NUA, noting that the UN system has not adequately acknowledged the pace, scale and implications of urbanization.