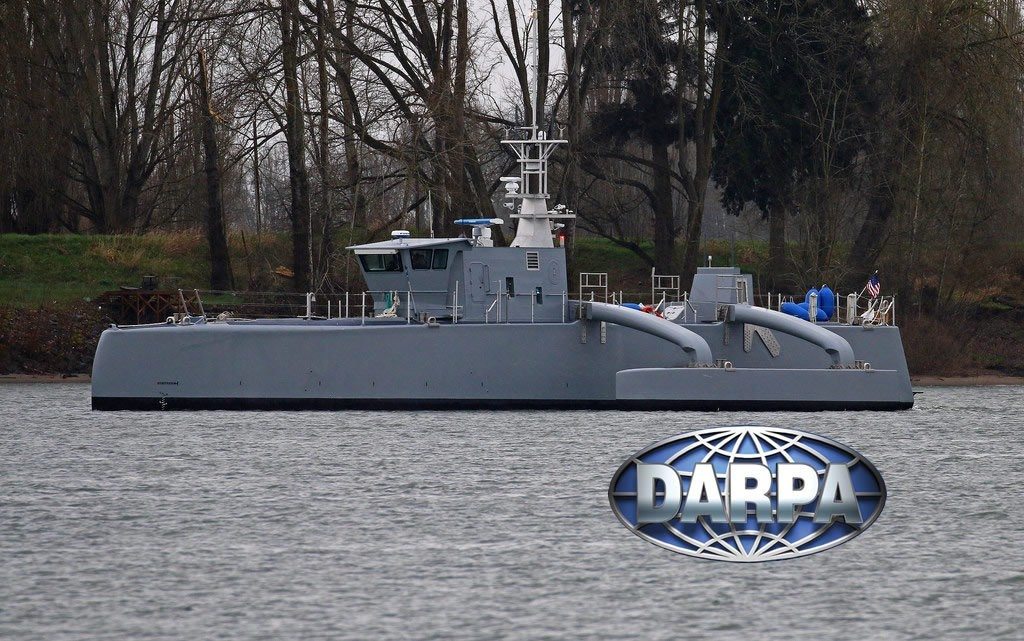 TN Note: DARPA (Defense Advanced Research Projects Agency) is a hotbed of Technocrats that answer to Secretary of Defense Ashton Carter, who is himself a Technocrat and a member of the elitist Trilateral Commission that drives Technocracy throughout the world.

The U.S. military on Thursday christened an experimental self-driving warship designed to hunt for enemy submarines, a major advance in robotic warfare at the core of America’s strategy to counter Chinese and Russian naval investments.

The 132-foot-long (40-metre-long) unarmed prototype, dubbed Sea Hunter, is the naval equivalent of Google’s self-driving car, designed to cruise on the ocean’s surface for two or three months at a time – without a crew or anyone controlling it remotely.

That kind of endurance and autonomy could make it a highly efficient submarine stalker at a fraction of the cost of the Navy’s manned vessels.

“This is an inflection point,” Deputy U.S. Defense Secretary Robert Work said in an interview, adding he hoped such ships might find a place in the western Pacific in as few as five years. “This is the first time we’ve ever had a totally robotic, trans-oceanic-capable ship.”

For Pentagon planners such as Work, the Sea Hunter fits into a strategy to incorporate unmanned drones – with increasing autonomy – into the conventional military in the air, on land and at sea.

It also comes as China’s naval investments, including in its expanding submarine fleet, stoke concern in Washington about the vulnerability of the aircraft carrier battle groups and submarines that remain critical to America’s military superiority in the western Pacific.

“We’re not working on anti-submarine (technology) just because we think it’s cool. We’re working on it because we’re deeply concerned about the advancements that China and Russia are making in this space,” said author Peter Singer, an expert on robotic warfare at the New America Foundation think tank.

Work said he hoped the ship, once it is proven safe, could head to the U.S. Navy’s Japan-based 7th Fleet to continue testing.

His goal is to have ships like the Sea Hunter operating on a range of missions, possibly even including counter-mine warfare operations, all with limited human supervision.

“I would like to see unmanned flotillas operating in the western Pacific and the Persian Gulf within five years,” he said, comparing the protype ship to early drone aircraft.

The ship’s projected $20 million price tag and its $15,000 to $20,000 daily operating cost make it relatively inexpensive for the U.S. military.

“You now have an asset at a fraction of the cost of a manned platform,” said Rear Admiral Robert Girrier, the Navy’s director of unmanned warfare systems.

Developed by the Pentagon’s Defense Advanced Research Projects Agency (DARPA), the ship is about to undergo two years of testing, including to verify that it can safely follow international norms for operating at sea.

First and foremost is ensuring that it can use radar and cameras to avoid other vessels. Powered by two diesel engines, the ship can reach speeds of 27 knots.