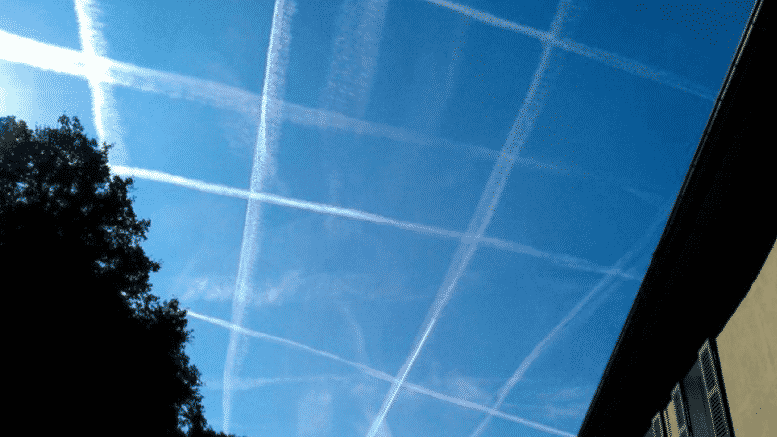 Please Share This Story!
PDF 📄
Geo-engineering has been happening for several years now, but USA Today is just now admitting that possibility by stating it would be more devastating to stop geo-engineering than it might be to start it in first place. What? They haven’t started it yet but they are more worried about stopping? Well, of course they have already started massive geo-engineering in the West, so their timeline is just a few years off. ⁃ TN Editor
A soldier walks towards an abandoned house as Mount Pinatubo spews ash as high as 12 miles during its eruption on June 19, 1991. When Pinatubo erupted, it cooled the Earth for about a year because the sulfate particles in the upper atmosphere reflected some sunlight. Several scientists have proposed doing the same artificially to offset global warming.

To counteract global warming, humans may someday consider spraying sulfur dioxide into the atmosphere to form clouds — and artificially cool the Earth.

The idea behind the process, known as geoengineering, is to keep global warming under control — with the ideal solution still being a reduction in the emissions of greenhouse gases.

However, suddenly stopping that spraying would have a “devastating” global impact on animals and plants, potentially even leading to extinction, according to the first study on the potential biological impacts of climate intervention.

“Rapid warming after stopping geoengineering would be a huge threat to the natural environment and biodiversity,” said study co-author Alan Robock of Rutgers University. “If geoengineering ever stopped abruptly, it would be devastating, so you would have to be sure that it could be stopped gradually, and it is easy to think of scenarios that would prevent that.”

Rapid warming forced animals to move. But even if they could move fast enough, they might not be able find places with enough food to survive, the study said.

“Plants, of course, can’t move reasonably at all. Some animals can move and some can’t,” Robock said.

If stratospheric climate geoengineering is deployed but not sustained, its impacts on species and communities could be far worse than the damage averted.

While animals would be able to adapt to the cooling effects of the spraying, if it’s stopped the warming would ramp up too fast for the animals to keep up.

“Imagine large droughts or floods around the world that could be blamed on geoengineering, and demands that it stop. Can we ever risk that?,” Robock said.

The idea behind this type of geoengineering would be to create a sulfuric acid cloud in the upper atmosphere that’s similar to what volcanic eruptions produce, Robock said. The clouds, formed after airplanes spray sulfur dioxide, would reflect solar radiation and thereby cool the planet.