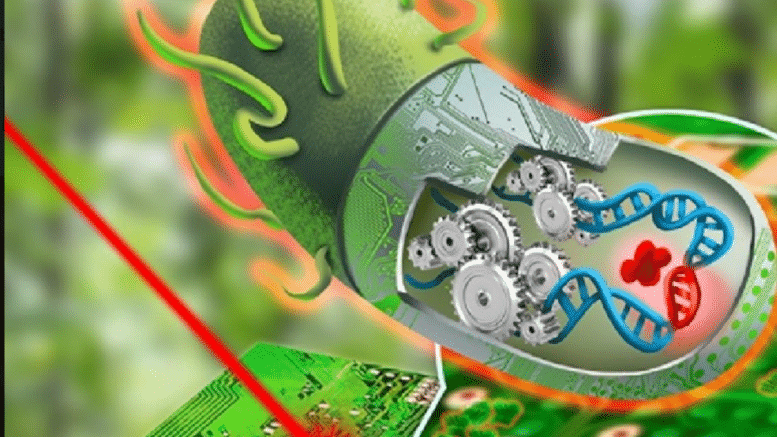 Please Share This Story!
PDF 📄
Technocrat/Transhuman scientists define synthetic biology as “the design of novel biological components and systems” and “the re-design of existing biological systems.” This means AI-assisted genetic engineering to create new or modified life forms. This is why the UN has called for a complete mapping of all DNA on earth to be used as a global commons database.

In my October 24 article, Global Blueprint Exposed: The Takeover Of All Genetic Material On Earth, I concluded,

Mapping of the human genome took most of the 1990s. Mapping the human brain, which started in 2010, is virtually complete. Now, mapping all DNA on earth, including human DNA, is the next big Technocrat/Transhuman dream. The outcome will be genetic manipulation of any or all living creatures and the creation of synthetic DNA that does not currently exist in nature.

Does the world really want synthetic life forms floating around and mixing with native species? Consider then that this is exactly the case with mRNA and DNA vaccines, which are genetically engineered to create substances not found in nature in the first place. Pandora’s Box has already been opened. ⁃ TN Editor

Redesigning organisms for other purposes is a new field of scientific endeavor known as synthetic biology. According to a report by the World Economic Forum, expect to see (and hear) more about it as scientists look to reset humanity’s future and the “bio-economy” on the back of coronavirus vaccine research.

The study was released Thursday by the Switzerland-based WEF, and proclaims a scientific human reset is near because “Synthetic biology lies at the intersection of an ageing population, climate change and environmental degradation.”

It sets out what it calls the “bioeconomy” that covers all sectors and systems that rely on biological resources (animals, plants, microorganisms, and derived biomass, including organic waste) as well as their functions and principles.

The study points to synthetic biology interlinks between economic and industrial sectors such as food, health, chemicals, materials, energy and services that use biological resources and processes – pretty much everything that sustains and underlines human endeavour.

DNA has its role as well.

Harnessing that scientific variety for the future of humanity is needed, the WEF report argues. The report cautions:

It is anticipated that the world will face increased competition for limited and finite natural resources given a growing population, increasing pressure on our food and health systems, and climate change and associated environmental degradation decimating our primary production systems.

Put more simply, that is where synthetic biology comes in.

Synthetic biology, proponents say, holds the promise of reprogramming biology to be more powerful and then mass-producing the turbocharged cells to increase food production, fight disease, generate energy, purify water and devour carbon dioxide from the atmosphere, as the New York Times points out.

The aim is to follow computing, using biological information as coded in DNA, so it can be programmed — with the goal of redesigning organisms for what the WEF deems useful purposes.

‘The Great Reset’ is upon us. French President Macron declared that in the wake of the Chinese coronavirus modern capitalism “can no longer work” at the Davos summit. https://t.co/sbjyLz57U7

According to the report, the ultimate driver of the research is money.

A recent McKinsey report anticipates applications from this bio revolution could have a direct global impact of up to $4 trillion per year over the next 10-20 years, enabling production of 60 percent physical inputs to the global economy, and addressing 45 percent of the world’s current disease burden, the WEF says.

The WEF has established its own Global Future Council on Synthetic Biology to help drive the research. More can be found out about the council here.

Quote from article, “the re-design of existing biological systems.” That of course includes us via the jabs that have been going on since 1796: https://en.wikipedia.org/wiki/Timeline_of_human_vaccines. I wonder what humankind would be like if there never were any vaccines at all. There are always choices made and with them come some good, and then comes the bad consequences for the choices made. If humankind would have followed the Bible and the laws of God, we would be in a different situation. The Bible clearly says prophetically that the choices of man will destroy them. That is where we are now. “Revelation… Read more »

But some members of humankind have in fact followed the Bible and the laws of God. Are they to be destroyed?

If you are a born again Christian who believed the gospel which is this, “How that Christ died for our sins according to the scriptures and that he was buried and that he rose again the third day according to the scriptures then you are saved. If you have not asked Jesus to save you, I urge you to do it. NO, born again Christians will not suffer the wrath of God! “For God hath not appointed us to wrath, but to obtain salvation by our Lord Jesus Christ.” 1 Thessalonians 5:9. Further the Bible teaches that he will take… Read more »

Only in this world.

You must view this video. It went viral in the EU and has only recently been subtitled for English speakers. It’s the kill shot of information. Please watch it to the end. The doctor reaches the summit of his presentation by making definitive statements that should be heard. He supports the Spanish study but because of his expertise, education and experience in several disciplines such as chemistry he was able to extract the primary cause of those who are dropping dead in front of us.  Dr. Noack was murdered within 24-hrs of this video going viral in Austria/EU. He died to provide the… Read more »

The key to the exit door is out there, but it seems nobody wants to see it. I promoted this article a year ago, and tracked down the author with the idea of generating LITIGATION to protect the human genome, but, no takers, not even the author. Citizens should be pushing governments to sign international accords to protect it, and make it criminally illegal to alter the human genome. Here’s the basis for it:
“The Human Genome as Public: Justifications and Implications” by Michelle J. Bayefsky, in Bioethics, Vol. 31 No. 3 2017”
https://thereisnopandemic.net/the-human-genome-as-public-justifications-and-implications-by-michelle-j-bayefsky-in-bioethics-vol-31-no-3-2017/

[…] explained in the video in this WEF article within the first ten minutes, synthetic biology, which includes mRNA vaccines, is bringing together individuals with expertise in biology, […]

[…] explained in the video in this WEF article within the first ten minutes, synthetic biology, which includes mRNA vaccines, is bringing together individuals with expertise in biology, […]

It’s apparent that the covid plandemic is one of the cover stories for transhumanism, cyborgism, DNA highjacking or whatever folks want to call it. Eradicating covid or any other disease is not a concern for any globalist. It’s apparent that these fallen devils have no integrity when they are too dishonest and unethical to even provide people with informed consent on what they’re signing up for. I am absolutely sure that folks who believe every lie their satanic masters tell them would have signed on for (covid jabs, whatever) if they knew what they were signing up for. I suppose… Read more »