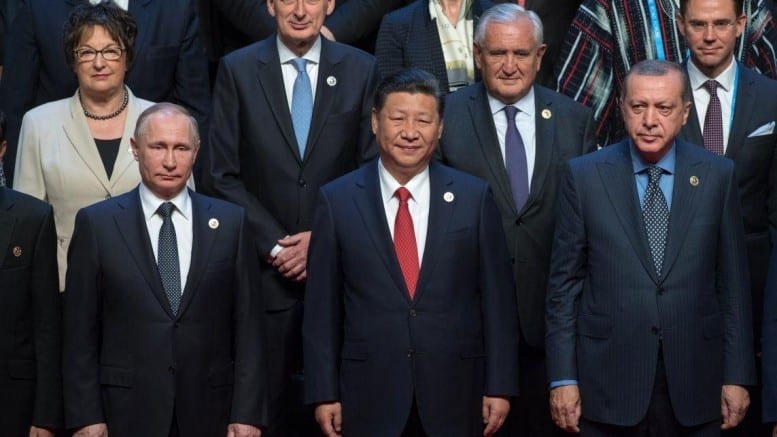 Please Share This Story!
PDF 📄
Remembering that a) the Trilateral Commission set out in 1973 to create a “New International Economic Order” and b) its members essentially adopted and invested in China to become a Technocracy (an economic system), it is not coincidental that the U.S. is finally being taken off the world stage as the primary economic power, and China is taking over. I have said for decades that this is an economic coup and not a political coup. Just about everyone has missed this 800 pound gorilla in the living room. ⁃ TN Editor

While vaudevillian comedy-like shouting matches broke out in the West Wing of the White House between President Donald Trump and his senior advisers and between the White House press secretary and various presidential aides, world leaders gathered in Beijing to discuss the creation of modern-day land and maritime «silk roads» to improve the economic conditions of nations around the world. Nothing more could have illustrated the massive divide between the concerns of many of the nations of the world and those of the United States, which is rapidly descending into second-rate power status, along with its NATO allies Britain, France, and Germany.

While Mr. Trump was threatening to fire his senior White House staff, reprising his one-time role in his reality television show «The Apprentice», China’s President Xi Jinping, Russian President Vladimir Putin, and presidents and prime ministers from around the world sat down to discuss the creation of new international and intercontinental highways, railways, and maritime routes under China’s proposed Silk Road Economic Belt and the 21st Century Maritime Silk Road.

Even countries that are cool on the Chinese initiative, including India and Japan, sent representatives to the summit that carried a bit more clout than the pathetic representation of the United States, Matt Pottinger, a little-known special assistant to Trump and the senior director for East Asia of National Security Council. In fact, the only reason Trump sent anyone to represent the United States at the Beijing gathering was because of a special request made by President Xi during his recent meeting with Trump at the president’s private Mar-a-Lago Club resort in Palm Beach, Florida.

Even North Korea, which rankled South Korea, Japan, and the United States by firing a ballistic missile into waters near Russia, sent a delegation to the Beijing meeting headed by Kim Yong Jae, the North’s Minister of External Economic Relations. The Trump administration, which sent a virtual unknown to Beijing, complained loudly about North Korea’s representation at the Silk Road summit. But Washington’s complaint was conveyed by someone as unknown as Mr. Pottinger, Anna Richey-Allen, a low-level spokesperson for the U.S. State Department’s East Asia Bureau. The reason why the United States is being spoken for by middle-grade bureaucrats is that the nation that still believes it is the world’s only remaining «superpower» is now governed by an administration rife with top-level vacancies, inter-agency squabbling, and amateur league players.

Even though major European Union member states were not represented in Beijing by their heads of government, Germany sent its Economy Minister, Brigitte Zypries. She warned, however, that the EU would not sign a Silk Road agreement with China unless certain EU demands on free trade and labor conditions were guaranteed. Germany’s reticence did not seem to faze other EU nations, which were represented in Beijing by their heads of government and appeared to be more avid in their support of the Chinese initiative. These EU member state leaders included Italian Prime Minister Paolo Gentiloni, Spanish Prime Minister Mariano Rajoy, Polish Prime Minister Beata Szydlo, Greek Prime Minister Alexis Tsipras, Czech President Milos Zeman, and Hungarian Prime Minister Viktor Orban. Moreover, had British Prime Minister Theresa May not been in the middle of a general election campaign, she would have been in Beijing. Nevertheless, she sent British Chancellor of the Exchequer Philip Hammond in her place.

If the Trump administration hoped to convince world leaders to stay away from Beijing, it was sorely disappointed. The United Nations Secretary General, Antonio Guterres, was there, along with the President of the World Bank Jim Yong Kim and International Monetary Fund Managing Director Christine Lagarde. Also present in Beijing were the presidents of Turkey, Philippines, Argentina, Chile, Indonesia, Kyrgyzstan, Belarus, Kazakhstan, Switzerland, Kenya, Uzbekistan, and Laos, as well as the prime ministers of Vietnam, Pakistan, Sri Lanka, Serbia, Malaysia, Mongolia, Fiji, Ethiopia, Cambodia, and Myanmar.

The Silk Road initiative has projects planned in all the nations whose governments were represented in Beijing, except for the United States and Israel. In addition to the nations represented by their government heads of state and ministers, Silk Road agreements were signed between China and Palestine, Georgia, Armenia, Bosnia and Herzegovina, Montenegro, Albania, Tajikistan, Brunei, Croatia, and East Timor.

The one clear message the Beijing meeting sent out to the world is that America’s «unipolar» vision of the world was dead and buried. Even among Washington’s longtime friends and allies, one will not hear Donald Trump referred to as the «leader of the Free World.» That phrase has been discarded into the waste bin of history along with America’s insistence that it is the world’s only «superpower.» The United States is a power, a second-rate one that happens to possess a first-rate nuclear arsenal. But nuclear weapons were not being discussed in Beijing. Major projects were on the agenda, projects that when completed will leave the United States at sea in the propeller wash.

President Xi, in his keynote address to the conference, said that the «One Belt and One Road» initiative is «a project of the century» and that will benefit everybody across the world. And to put his money where his mouth is, Xi said China will contribute 80 billion yuan (US$113 billion) as added financial impetus to create a global network of highway, railway, and maritime links in a recreation of the ancient Silk Road that linked China to the West. Meanwhile, in Washington, Trump spoke of having recorded «taped» conversations with his fired director of the FBI James Comey, setting off a political firestorm. A new global infrastructure being spoken about in Beijing and political hijinks the major topic of conversation in Washington. The United States has fallen into second-rate global status and is seriously ill as a cohesive nation-state but does not even realize it.

China and Russia used the Beijing summit to showcase several Eurasian initiatives, including the Russia-inspired Eurasian Economic Union (EEU) and the China-initiated Asian Infrastructure Investment Bank (AIIB). Both the Chinese and Russian heads of state let it be known that the BRICS alliance of Brazil, Russia, India, China, and South Africa was still a potent world entity, even though South Africa was not represented in Beijing by its president and India chose not to send any representative to Beijing.

President Putin’s words to the conference about the new geopolitical status in the world were noteworthy: «the greater Eurasia is not an abstract geopolitical arrangement but, without exaggeration, a truly civilization-wide project looking toward the future.» In other words, the European Union, which is losing the United Kingdom as a member and will never see membership for Turkey, is a dying international organism. Other international initiatives, like the EEU, BRICS, AIIB, and the One Belt, One Road (OBOR), are leaving the EU and the United States in the dust. That was evident by the fact that the United States was represented in Beijing by an overrated desk clerk and the EU by a Brussels «Eurocrat,» the European Commission vice president Jyrki Katainen.

Believe me when I say that I know that America is now a second rate nation with squabbles going on all over the place.

I don’t see much benefit for the U.S. in a Silk Road project. I would like to see the U.S. and a few allies withdraw from the U.N. and quit trying to force freedom on people that are not willing to fight for it.
Biblically, we are at the time of a one world dictator (the Antichrist) and we need to resist him as long as possible.
If we pull our forces and equipment back home and become isolationist, and drain the swamp we will fare better in the soon coming world wide economic collapse.

///See what the hell happens when you see something and say nothing of the crooks in our government, well now it comes full circle bite you in the azz, Please prepare there is still a little time left,before its too late, if your not getting prepare for what’s coming then you and those around you won’t make it///

Disappointing article to say the least. Number one GOOD for the US and those that turned a cold shoulder on this Globalist ran, UN backed, push for one world government! Shame on this writer for omitting the facts to simply push through his viewpoint! Just because 90% of the world supports Satan does that mean we are to pay close attention or play act along with them? NO WE DO NOT! We shun them, we condemn them all the time we keep a very watchful eye on them. Get it straight folks we are in end days and we can… Read more »

Let the Brics fall where they may. Just don’t use our American tax dollars to prop up Marxists dictatorships around the world. If they can make it on their own, fine. If not, don’t let them steal from us. We’ve been propping up those we shouldn’t for far too long. If traitor Clinton hadnt given the chinks our missile technology, they wouldn’t be threatening us right now.

The Author of this Article would have done better by cutting to the BS and saying they met to talk about their “New World Order” where the little people of the World will become slaves. Don’t believe me, Google “Agenda 21” and “Agenda 2030”.

The United States isn’t being left anywhere. What is starting to happen is much more dangerous. the technocrats worldwide are forming an empire, with China at its center. The West will do likewise in response. This is already beginning in the form of quiet, informal trade talks between the U.S. and the UK. Unless the situation in Pyongyang goes critical, in which case all bets are off, within twenty years the world will consist of two nuclear armed empires with diametrically opposed social and political systems trying to stare each other down. Not a pretty picture.

yes but we have our rust belt and clean air