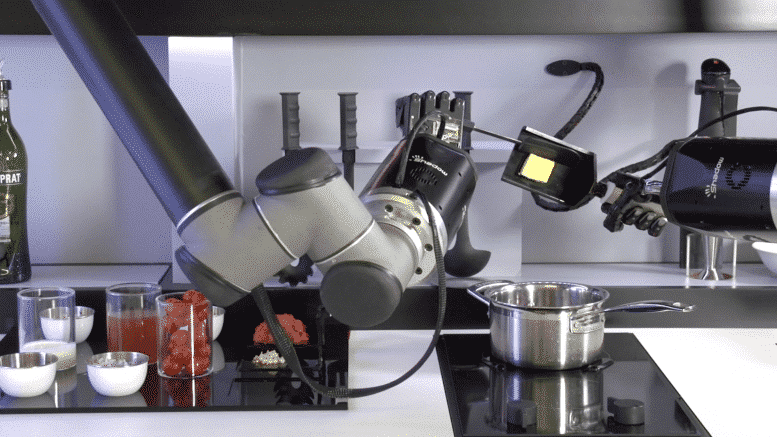 Technocrat scientists and engineers have misdirected their talents to obsolete the human need to work and create.  While many people will ‘want’ one of these cooking robots, those who love to cook will be seriously discouraged. The implications for restaurant workers are staggering.⁃ TN Editor

Apparently, having a home cooked meal from the kitchens of Thomas Keller, Alain Ducasse and Gordan Ramsay could become a reality. On 2018, Moley will launch the world’s first fully-automated and integrated intelligent cooking robot—a robotic kitchen that has unlimited access to chefs and their recipes worldwide. So not only can this robotic chef cook over 100 different meals for you, it will clean up after itself too!

According to Mark Oleynik— CEO and Founder of Moley Robotics, the way this machine works is by specifying the number of portions, type of cuisine, dietary restrictions,calorie count, desired ingredients, cooking method, chef, etc. from the recipe library first. Then, with a single tap, you could choose your recipe, place the individual pre-packaged containers of measured, washed and cut ingredients (that you could order through Moley) on designated spots, and press “start” for the cooking process to begin.

Consisting of all the necessary cabinetry, appliances, utensils, and two fully articulated robotic motion capture system (which records each movement of the master chef while wearing special gloves with sensors), among other features, this kitchen could cook anything like a human chef in motion. Currently developing an automatic dishwasher facility, Oleynik foresees the robotic chef to be able to clean the kitchen surfaces after cooking as well.

Among the hundred dishes included in the first version of robotic chef is Tim Anderson’s crab bisque, a particularly difficult recipe that requires striking the right balance between tomatoes, crabmeat and spices. Even though it took Anderson himself five times to make this soup just right with the motion capture system, Oleynik believes this is a testament to the growing power of Artificial Intelligence.

Since the Moley kitchen could essentially cook any downloadable recipe on the internet, the food-robotics-AI startup expects to include a “share and sell” your own recipes feature, where consumers and professional chefs could access and sell their ideas via the “digital style library of recipes” database. Designed to work with anyone who has the desire (and the ability) to cook, this platform for collective creativity and knowledge could become a launching pad for aspiring chefs.