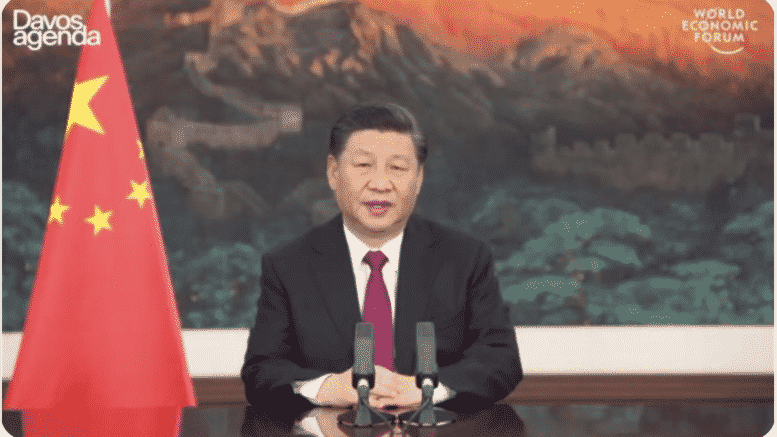 Please Share This Story!
PDF 📄
As a Technocracy, China is one-hundred percent behind the World Economic Forum’s so-called “Great Reset” that will throw the world into Technocracy and Scientific Dictatorship. China knows something about this as it very efficiently represses 18.5% of the world’s population in its own country. ⁃ TN Editor

Speaking virtually on the first day of Davos’ World Economic Forum on Monday, Chinese President Xi Jinping gave his first major public address since Joe Biden entered the White House, tailoring his message toward calming tensions among global rivals and urging a return to “mutual respond” but also emphasizing Beijing is ready to forge its own path regardless.

Underscoring that nations must “abandon ideological prejudice” and immediately abandon a dangerous “Cold-War mentality” he called on world powers to “stay committed to international law and international rules instead of staying committed to supremacy.”

“Difference in itself is no cause for alarm, what does bring alarm is arrogance, prejudice and hatred,” Xi told the Davos Agenda event, following four years of the Trump administration’s anti-China policies which brought Sino-US relations to their lowest point in decades. “Confrontation will lead us to a dead end.” It should be noted that there’s previously little doubt that Davos attendees pretty much despised Trump, and now this year Xi of China’s Communist Party is opening the Davos agenda.

“To build small circles and start a new Cold War, to reject, threaten or intimate others, to willfully impose decoupling, supply disruptions, or sanctions, or to create isolation or estrangement, will only push the world into division and even confrontation,” he said.

Recall this is similar language to his “warnings” of rising anti-globalization and protectionism during his prior 2017 Davos speech, where he said, “Pursuing protectionism is like locking oneself in a dark room. While wind and rain may be kept outside, that dark room will also block light and air. No one will emerge as a winner in a trade war.”

Except now the world has been ravaged by the continuing slow burn of the global pandemic, which originated in Wuhan, China last year—making the Davos Agenda 2021 a dubiously hoped-for ‘great reset’ year, as Rabobank quips sarcastically:

Today kicks off the annual World Economic Forum, which this time round is online and so can’t charge anyone $43 for a hotdog. Expect various iterations along the theme of  “Builders’ Bums Better” from the talking heads as the ‘Great Reset’ slash ‘Great Reflation’ is dangled before markets.

“We’re going through the worst recession since the end of World War II. For the first time in history economies of all regions have been hit hard at the same time…” Xi said

“Despite the trillions of dollars in relief packages worldwide, global recovery is rather shaky and the outlook remains uncertain… Macroeconomic policy support should be stepped up to bring the world economy out of the woods as early as possible,” the Chinese president added.

Atheist God hater wants you to know there is a One World Government they are setting up and you can’t do anything about it. The misery of it all means that they will control you and own everything, and give you a little stifle of food. That is why loving this world system is forbidden by God. Evil exists and they follow Satan their dear leader, and it will be into hell. For God so loved the world that He gave His only begotten Son that whosoever believeth in Him should not perish but have EVERLSTING life. John 3:16. Yes we will live forever somewhere. In heaven or… Read more »

This is China: https://nypost.com/2020/02/01/how-chinas-xi-jinping-destroyed-religion-and-made-himself-god/ here: https://www.washingtonpost.com/news/worldviews/wp/2017/11/14/jesus-wont-save-you-president-xi-jinping-will-chinese-christians-told/ and here: https://www.breitbart.com/asia/2019/09/18/china-forces-churches-to-replace-ten-commandments-with-xi-jinping-quotes/ “Thus saith the king (of Assyria), Let not Hezekiah (king of Judah) deceive you: for he shall not be able to deliver you out of his hand: Neither let Hezekiah make you trust in the LORD will surely deliver us, and this city shall not be delivered into the hand of the king of Assyria. And Isaiah (the prophet) said unto them, Thus shall ye say to your master, Thus saith the Lord, Be not afraid of the words which thou hast heard, with which thou hast heard, with which the… Read more »

The last year has taken so many of us on a journey, a white knuckle rollercoaster of doubt vs belief, a testing of soul, body, mind, wit, humour… need i go on? In the white noise of conspiracy the deceptions have been sown… and revealed. As we evolve there is a common ground, a white light that shows those who would destroy our beautiful world for WHO THEY ARE. The imposed guilt used as weapon against us, race, gender, climate, dis-ease has been shown for what it really is, a weapon a distortion of our own better judgements. In these… Read more »

ANY politician in Any democratic country who goes along with this MUST be charged with treason!