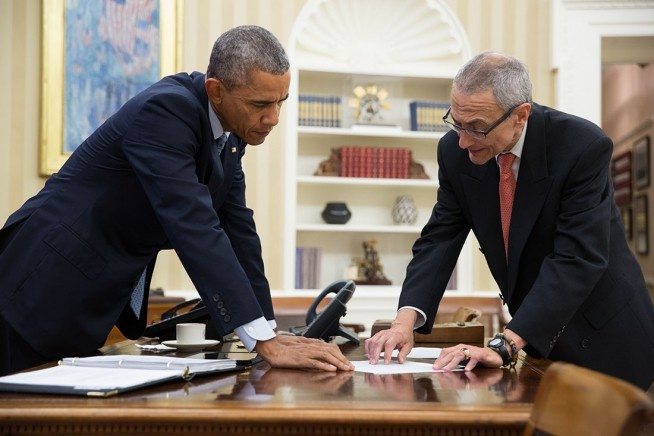 TN Note: This is a must-read article about John Podesta from a progressive/liberal point of view. I have stated many times that Podesta is the exclusive climate-change architect in Obama’s administration, and that he is also a member of the elitist Trilateral Commission. The Commission is the prime driver of Technocracy (aka Sustainable Development and Green Economy) since its founding in 1973 by David Rockefeller and Zbigniew Brzezinski. This article also speaks to the relationship that Podesta had with President Bill Clinton and his Secretary of the Interior, Bruce Babbitt – both of who were also members of the Trilateral Commission. As you will see, Podesta’s influence goes way beyond climate change, making him one of the most influential centers of influence in America. He is currently Hillary Clinton’s campaign manager.

That winter’s day, as she headed to the White House, Gina McCarthy undoubtedly steeled herself for a confrontation. It was 2014, and McCarthy, the head of the U.S. Environmental Protection Agency, was about to make her case for blocking the controversial Pebble gold mine planned for Alaska’s Bristol Bay watershed, home to one of the world’s most prolific salmon fisheries. But she knew that the lawyers, economists and political advisors assembled in the Roosevelt Room would make Swiss cheese out of her plan. The decision would inflame the Republican Congress, they’d say, hamper economic growth and likely provoke a lawsuit from industry. Then they’d send her on her way without an answer.

But McCarthy also knew there would be a new player in the room. Longtime Democratic operative John Podesta, Bill Clinton’s former chief of staff, had just returned to the White House as counselor to Barack Obama. And Podesta had a reputation for bold conservation policy.

Shortly before the meeting, in fact, Podesta pulled aside Mike Boots, the acting head of the White House’s Council on Environmental Quality. He said: “Maybe it’s time for me to show people it’s going to be different,” Boots recalled.

And 10 minutes into the conversation, Podesta broke in. He said that he and the president endorsed McCarthy’s plan, and then laid out exactly how the announcement would roll out. McCarthy left the room, dumbfounded and elated. “Was that the Roosevelt Room that I was just in?” she asked, according to a White House staffer, who asked to remain anonymous. “I’ve only ever been handed my ass in that room.”

The Pebble Mine decision was just the start of a yearlong presidential sprint to advance conservation and climate change goals. Podesta has been there every step of the way. Think of him as the Good Witch in The Wizard of Oz, telling Obama’s Dorothy that she always had the power to do what she wanted; she simply had to tap her heels together three times.

As the 66-year-old Podesta embarks on yet another adventure — this time  as Hillary Clinton’s campaign manager for the 2016 election — he can list some remarkable achievements: He directly had a hand in six of 16 national monuments Obama  has created or expanded so far by executive order, including New Mexico’s Organ Mountains-Desert Peaks, Colorado’s Browns Canyon, Southern California’s San Gabriel Mountains, and the country’s largest marine reserve, the Pacific Remote Islands National Monument; and steered a landmark climate deal with China to control greenhouse gas, as well as the first proposal to regulate climate emissions from U.S. coal-fired power plants.

Add in his record under Bill Clinton — the sweeping 2001 “Roadless Rule” protecting 58 million acres administered by the U.S. Forest Service, and the 19 national monuments and conservation areas, many in the West, that Clinton declared in his second term in office — and Podesta can claim a green legacy that even Teddy Roosevelt would be proud of.

“Nobody in the 21st century in U.S. government has had the influence that he has had on public lands and climate change,” says Douglas Brinkley, a Rice University professor of history.

Podesta rarely gets public credit, but those who do — from the presidents he has served to Cabinet members and agency heads — are quick to acknowledge his contributions.

Says Bruce Babbitt, Clinton’s Interior secretary, “The hidden hand of John Podesta is involved in every environmental advancement accomplished in the Clinton and Obama administrations.”