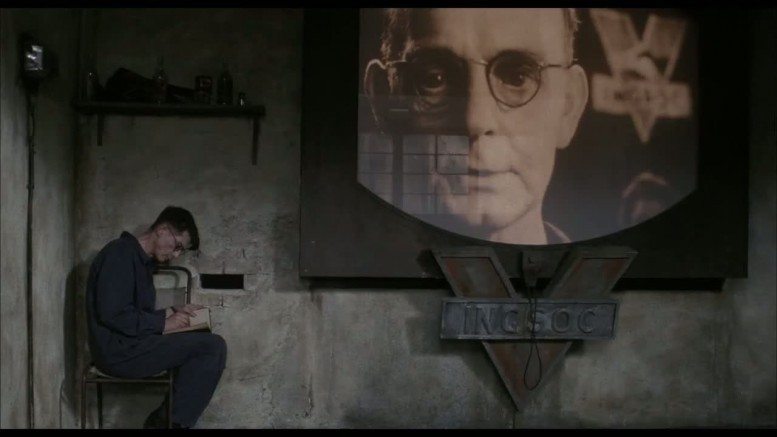 TN Note: Orwell was well-exposed to Technocracy and understood how phony ‘science’ played a central role in Hitler’s Nazi Germany. There is nothing to add to this article that probably hasn’t been said before, but American’s would do well to pay heed to history.

Assessing current conditions in the United States, it would be next to impossible not to grasp innumerable parallels to George Orwell’s dystopic portent, 1984. Though other fictional dystopias could similarly elicit comparisons to the dark turn taken by American empire, aspects of 1984’s creepy authoritarian nightmare ring all-too-true.

And Big Brother-like surveillance — though undoubtedly relevant — imparts only the most obvious, and therefore least pertinent, connection on the list.

“Oceania was at war with Eastasia: Oceania had always been at war with Eastasia,” Orwell wrote of two of the three remaining nation-states on the planet. Though it analogizes Russia’s mercurial relationship with Nazi Germany, the same volatility aptly fits U.S. involvement in the Middle East — where, though propaganda would purport a decisive enemy, the truth remains far murkier. A constant state of undeclared but active war rules foreign policy — driven almost exclusively by the war machine’s profiteering from plundering of foreign lands’ natural resources.

Big Oil, Big Pharma, and the multi-faceted defense industry have experienced exponential profits since perpetual war became the de facto basis of foreign policy — and Big Banks share in the reward. But all of this war requires the U.S. government maintain support from the public — and what better way to win them over than appeal to fear of the Other?

When John Brady Kiesling, a career diplomat, tendered his letter of resignation to Secretary of State Colin Powell, he piercingly criticized the warped factors driving both American domestic and foreign policy surrounding the needless war in Iraq — with barbs unfortunately equally applicable today:

“We spread disproportionate terror and confusion in the public mind, arbitrarily linking the unrelated problems of terrorism and Iraq. The result, and perhaps the motive, is to justify a vast misallocation of shrinking public wealth to the military and to weaken the safeguards that protect American citizens from the heavy hand of government. September 11 did not do as much damage to the fabric of American society as we seem determined to [do] to ourselves […]

“Has ‘oderint dum metuant’ [Let them hate so long as they fear] really become our motto?”

After the attacks of September 11, 2001, it became immediately evident American government had its jackpot ticket for war in perpetuity — the only necessary condition being wool sufficiently ambiguous to cover the public’s eyes in fear.

Since that time, under the guise of national security, Big Brother-like domestic surveillance has become so thoroughly entrenched in our lives as to be virtually ignored by the general populace. As a necessary and insidious outgrowth of massive spying, the government attempts to cultivate fearful citizen-spies, by employing the not-at-all ominous If You See Something, Say Something catchphrase-titled program. Of course, the government arm responsible for this and other programs — the overarching Department of Homeland Security — seems ripped directly from the pages of 1984.

“Political language is designed to make lies sound truthful and murder respectable, and to give an appearance of solidity to pure wind,” Orwell noted in his 1946 essay, “Politics and the English Language.” This observation aptly summarizes U.S. war propaganda in its entirety — with a constant government-backed corporate media blitz surrounding the war on terror shaping public perception of what constitutes terrorism, and who, a terrorist.

Betting on Americans’ cognitive dissonance, historical amnesia, and tacit acceptance of spoon-fed, baseless patriotism, the government doesn’t often find barriers to inculcating a blanket support for obtuse military missions. War so saturates every aspect of life, when the Pentagon announced last week forces had already been on the ground in Yemen for two weeks, the public instead trained its focus to the latest installation of Captain America.

And nevermind the detail that ground support of Saudi Arabia and the United Arab Emirates in Yemen would be allocated for fighting al-Qaeda — a different faction of the same group the U.S. currently employs as somehow less dangerous terrorists to assist deposing Syrian president Bashar al-Assad. Moderate rebels is thus the Newspeak term for terrorists the American empire finds usable — making terrorist and terrorism utterly conditional terms. Of course, the government failed to explain how a war on the concept of terrorism should play out if that terrorism depends on circumstance — or, more accurately, whim — but once instituted, paranoia surrounding the word opened the floodgates for battling terrorism inside the United States.

Exactly as Orwell cautioned in 1984 — and precisely as Kiesling’s foreboding resignation letter predicted it would.

How does a government persuade its citizens their enslavement would be desirable and beneficial? Frame it as necessary protection against any threat to their fundamental security — and implement more contentious aspects of said servitude in palatable microsteps. Fear of terrorism — or, more directly, xenophobia — constitutes sufficient reason for many to cast off basic human rights through increasingly invasive laws and governance.

Legislation, however, isn’t by far the sole vehicle available to the government. In a culture so utterly imbued in paranoia, neighbors aren’t only willing to spy on neighbors — or complete strangers, to that end — they’re willing to alert law enforcement should they observe … Something.

One perfect example of the absurdity of the If You See Something, Say Something citizen spy program occurred this week when a woman, suspicious of cryptic notes penned by the person seated next to her on an American Airlines flight, decided to Say Something.

The flight was delayed for over two hours, the FBI was called, and an egregious commentary on paranoia and xenophobic profiling in the U.S. became one of an unfortunate many for the history books.

This unbelievably unaware woman told on acclaimed University of Pennsylvania economics professor, Guido Menzio — who had been scribbling a complex math formula in a notebook. Menzio posted his experience on Facebook, describing his encounter with the FBI after being briefly pulled from the plane, writing: “They ask me about my neighbor. I tell them I noticed nothing strange. They tell me she thought I was a terrorist because I was writing strange things on a piece of paper. I laugh. I bring them back to the plane. I show them my math.”

Menzio, to the unnamed woman, was guilty of terrorism because his Italian ancestry gifted him with darker complexion and hair, and because her lack of education and state conditioning caused her to see dark terrorist plots in mathematical formulae — possibly, and disturbingly, because she mistook it for Arabic.

Restrictions on travel aren’t limited to fearful passengers, either, as the notoriously invasive Transportation Security Administration has made air travel an almost unbearably onerous task. A recent report predicts grueling airport delays due to the combination of a 10 percent reduction in TSA staff and a 15 percent increase in the number of expected travelers. Though a PreCheck program is offered by the TSA, people simply aren’t signing on — likely because they’re forced to submit to an even more invasive background check. And it isn’t as if the TSA has a stunning success rate in thwarting terror attacks, either — though it does have a successful track record for restricting freedom of travel.

While the government would like you to believe TSA safety measures protect the country from terrorism, evidence lies with a far more laughable reality — like the time a CNN journalist once had her container of pimento cheese confiscated by agents. Another report indicated the underpaid and understaffed TSA is largely incompetent. Congressman Stephen Lynch explained, “We had folks — this was a testing exercise, so we had folks going in there with guns on their ankles, and other weapons on their persons, and there was a 95 percent failure rate.”

Essentially, terrorist paranoia is working exactly per the Dept. of Homeland Security’s design — otherwise ordinary Americans are now guilty, simply by being present. Guilty of being non-white. Guilty of speaking a language other than English. Guilty of math. Guilty of possession of cheese spread.

But most of all, guilty under the system that would rather pit neighbor against neighbor — lest those neighbors realize they have more in common with one another than with the powers claiming to have their security in mind — because that realization might bring anger, dissent, and potentially action to topple those powers-that-be.

And entirely different dystopic restrictions on travel — harkening almost exactly to the 1930s Nazi Germany that so influenced Orwell — can be found in police checkpoints. Of dubious legality, law enforcement checkpoints for everything from drunk driving to heroin — to seatbelts — have become commonplace around the U.S. In the name of safety, police bottleneck traffic, test sobriety, search cars, write revenue-generating tickets, and even arrest those found ‘guilty’ or who try to avoid the trap.

And this lack of the ability to travel freely — the basic right to mobility without restriction — is only one highly specific example of coercion as the new norm. Entire books could be justifiably penned to discuss the ridiculousness of licensing requirements — summarized briefly as the state taking a right away from you in order to give it back to you at an often red-tape-heavy price. In the dystopic new millennium, the State requires children to seek permitting for such traditional activities as shoveling snow or setting up their own lemonade stands — and alarmingly have been shut down for failing to do so.

You don’t even have to be accused, much less charged, with a crime to have your own property and cash seized — or more accurately, stolen — by the State, which it then may use for whatever shady purpose it chooses. This unchecked policing-for-profit scheme has created a freakishly telling figure, as described by The Free Thought Project, “law enforcement in America has stolen $600,000,000 more from Americans than actual criminal burglars.”

Freedom to simply live one’s life, without harming another, has been co-opted by a State hell bent on maintaining slavish control of its people.

I have likely committed a Face Crime by reading and sharing this article.

People like to be told what to do or obviously we would not have communism and tyranny. America has always been straddling the fence and why it is so painful for US.