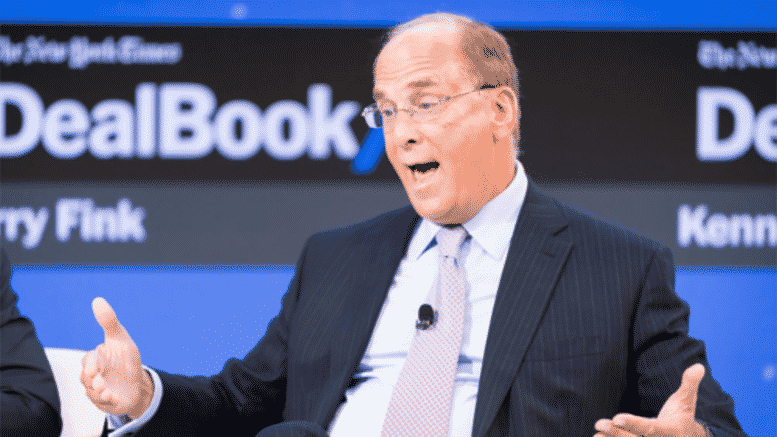 Please Share This Story!
PDF 📄
Larry Fink is a core leader in the World Economic Forum’s Great Reset. He links the Ukraine/Russia war as an accelerator to “reorganize the global economy as the old world order crumbles.” This is in line with TN’s analysis and Fink himself has confirmed that this is, in fact, the case.

BlackRock CEO Larry Fink’s annual letter to shareholders has become heavily scrutinized as ones from Berkshire Hathaway chief Warren Buffett and JP Morgan chief Jamie Dimon. Fink is the boss of a $10 trillion asset manager, the world’s largest and oversees more money than the Fed, told shareholders Russia’s invasion of Ukraine would fundamentally reshape the world economy and drive up inflation as supply chains are reconfigured.

“The Russian invasion of Ukraine has put an end to the globalization we have experienced over the last three decades,” Fink wrote.

Fink predicted “companies and governments will also be looking more broadly at their dependencies on other nations. This may lead companies to onshore or nearshore more of their operations resulting in a faster pull back from some countries.”

As a result, “a large-scale reorientation of supply chains will inherently be inflationary,” he said, pointing out that even before the conflict broke out in Eastern Europe, the economic effects of the virus pandemic brought US inflation to its highest in four decades.

Today’s inflationary environment, teetering on the verge of stagflation, has put central banks in “difficult decisions about how fast to raise rates. They face a dilemma they haven’t faced in decades, which has been worsened by geopolitical conflict and the resulting energy shocks. Central banks must choose whether to live with higher inflation or slow economic activity and employment to lower inflation quickly,” Fink said.

Like Fink’s last letter to shareholders, he was focused on the firm’s “ESG” and “green technology” commitments. This time around, he said the invasion “will actually accelerate the shift toward greener sources of energy in many parts of the world,” because higher fossil fuel prices will make the transition of renewables financially competitive.

“We’ve already seen European policymakers promoting investment in renewables as an important component of energy security,” he said. “More than ever, countries that don’t have their own energy sources will need to fund and develop them– which for many will mean investing in wind and solar power.”

In the short-term, alternatives to Russian energy products “will inevitably slow the world’s progress toward net-zero [emissions] in the near term,” he added. BlackRock is the world’s largest asset manager, which has pushed “ESG” policies that harm American fossil fuel companies, basically following the World Economic Forum’s (WEF) script.

On digital currencies, Fink said the Ukrainian conflict has the “potential impact on accelerating digital currencies. The war will prompt countries to re-evaluate their currency dependencies.” He spoke about central bank digital currencies (CBDC) and how they “can enhance the settlement of international transactions while reducing the risk of money laundering and corruption.” Again, Fink is following WEF’s script of implementing new forms of digital currency that will mean governments will have more control over the people.

“Russia has been essentially cut off from global capital markets, demonstrating the commitment of major companies to operate consistent with core values. This “economic war” shows what we can achieve when companies, supported by their stakeholders, come together in the face of violence and aggression,” he said.

Fink has made clear the conflict in Ukrainian is being used as an accelerator to reorganize the global economy as the old world order crumbles and a multipolar world emerges. Supply chains will be on-shored or moved closer to home, and the WEF’s agenda of a green new world, more corporate surveillance, and trackable money are inevitable this decade.

EXACTLY what we knew was happening in 2020. The NWO totalitarians are using the willfully ignorant technocrats to bring down the world’s economy so they can build a slavery system for us. I can’t tell you how many times I sent concise information to a friend of mine over the last two years, a financial person mind you, that refuses to believe this was/is the goal and the reason for the covid tool. He is more than a little blind in both eyes. Now he’s looking at this differently, I’m sure. We no longer talk. I can’t have a conversation… Read more »

"We're on the Brink of a Dramatic Change" - Intercessors for America

[…] money could only be spent only on sustainable products or genetically altered meat. Other scenarios […]