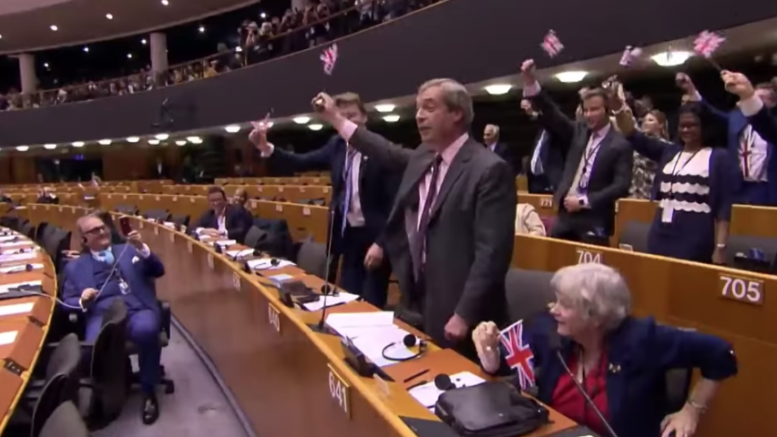 Please Share This Story!
PDF 📄
Nigel Farage did a masterful job of exiting the EU while bashing it one last time. Note that The Daily Telegraph openly calls the EU a Technocracy but Americans have no idea of what that means.

However, as Farage rode the populist party wave to victory, Britain will almost certainly fall into the techno-populist mentality that establishes their own brand of Technocracy. In other words, same outcome in the end: Technocracy. ⁃ TN Editor

As Britain prepares to leave the European Union tonight, it continues to emote division and debate.

Far from being the end of the story, some commentators believe it is just the start. Brexit day has dominated yesterday’s media opinion pages.

Allister Heath writes “we must hope that over time, more countries choose – and are allowed – to leave, that there will one day be a Frexit and a Danexit, that the euro will be dissolved in an orderly fashion and that the entire project will wither away, replaced instead by looser, liberal co-operation. Euroscepticism was never a selfish ideology. It was never just about returning self-government to Britain.

No genuine Eurosceptic ever claimed that it was fine for the Netherlands or Spain to have to swap democracy for technocracy, but unacceptable for the UK. If it was bad for us, it was also bad for them. Early Eurosceptic groups maintained close ties with fellow travellers from Europe: Vaclav Klaus, the Thatcherite former Czech president, was the guest at a Brexit Party rally last year.

Euroscepticism is the application to the EU of a universalist theory based on a broad set of principles: national self-government is better, over time, for peace, prosperity and liberty than belonging to technocratic superstructures; genuine democracy can only exist within a demos, such as as a nation; competition and co-operation between smaller, nimble, independent, liberal democracies is a better, more resilient way of organising the world than handling over power to gigantic, unresponsive political monopolies run by bureaucrat-kings.”

It’s editorial takes on a reflective mood. It states “it was a beautiful gesture. After Members of the European Parliament voted to back the Brexit Withdrawal Agreement, they sang Auld Lang Syne, Robert Burns’ version of an old Scottish folk song about friendship, as a way to bid goodbye to the United Kingdom.”

It goes on to say “the EU has helped keep the peace in Europe for a lifetime after millions died in two horrendous world wars. And the fact the UK and Ireland were both members meant those who were prepared to commit murder in Northern Ireland’s Troubles began to look as foolish as they were callous and brutal.

This Brexit is similar to what Trump is doing??? Amazing the world thought the E.U. would be head of the world government, the revival of the Roman Empire spoken of by Daniel the prophet “His legs of iron, his feet part of iron and part of clay.” Daniel 2:33, which is “After this I saw in the night visions, and behold a fourth beast, dreadful and terrible, and strong exceedingly; and it had great iron teeth: it devoured and brake in pieces, and stamped the residue with the feet of it: and it was diverse from all the beasts that… Read more »

No its not while Farage point out the unelected ruling over the plebs Trompet makes deals with the Zionist neocons and evangelicals on all fronts trowing the plebs under the bus and the palestinians while licking Saudi peddos arse. Trompet is just a version of Killary just more open about his deeds!

The world has already been divided by 10 world regions by the United Nations. https://www.answers.com/Q/What_are_the_10_Regions_of_the_World