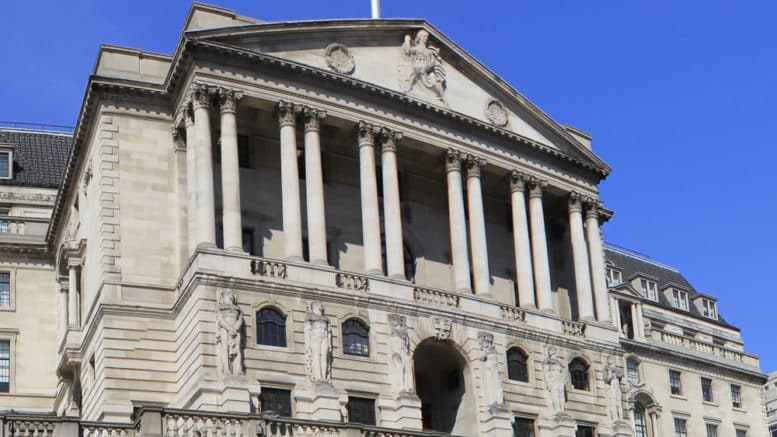 Please Share This Story!
PDF 📄
As the Bank of England leads the world’s central banks into a ‘Green New Deal’, it proposes Green Bonds as a way to finance Sustainable Development, aka Technocracy, and plunder the world’s wealth once and for all. ⁃ TN Editor

I was told many depressing things as a child.

Watching World Vision infomercials educating the west to the want and misery suffered by millions of children in the third world, I wasn’t alone in asking adults “why”? When I enjoyed all the comforts of food security, electricity and running water, why were these other children living in poverty? I know that I was not the only bewildered child to receive the shallow response that I did from family and teachers when I was told that this “simply is the way it is”. At best, we privileged few in the 1st world could hope that $1/day would alleviate their pain, but really there was no great solution.

Later in life, as my closest friends found themselves enmeshed in university political science and economic programs, the innocent curiosity that recognized injustice for what it was not only died under the weight of materialist theories of human nature which their parents paid good money to feed them, but upon leaving school, those same friends actually became witting accomplices in that very system which their youthful hearts recognized as wrong so many years earlier. Since humanity was intrinsically selfish and our economic system so immutable, the best we could hope for was success in life and enjoy being on the receiving end of destiny.

Again, I know that I’m not alone in this experience, as tens of millions of citizens took to the streets all around the world on September 27 to march for the earth, repulsed by corrupt consumerism and celebrating the advent of a Green New Deal.

This activation of “people power” driven by such institutions as the Extinction Rebellion, Fridays for the Future and the young Greta Thunberg could never have occurred had not a deep sense of injustice and malaise not already been festering in our collective hearts. That sense of injustice and malaise connects us to our deepest humanity and is a purity which unites each of us in a field of compassion with the whole of which we are but parts, and should be celebrated and protected at all costs.

In spite of that purity something much darker showed its ugly face on September 27 which used that inherent goodness to its dark advantage. It is that dark something that I would like to discuss.

You Know Something Isn’t Right When…

The first clue as to the ugly problem can be found in the simple fact that leading central bankers had already issued a call for the same new green banking system which Greta and the countless masses also demanded long before Extinction Rebellion, Fridays for the Future or There is No Time were ever created.

While officially announced on September 22nd at the opening of the UN Climate Summit in NY, a Central Banker’s Climate Compact was unveiled under the leadership of Bank of England Governor Mark Carney that had already been in the works for over 18 months representing over 130 of the world’s largest and corrupt banks calling for a radical decarbonisation of the world economy by 2/3 according to commitments laid out in the 2015 Paris Climate accord.

Bank of England head and Chair of the Bank of International Settlement’s Financial Stability Board (2011-2018) Mark Carney announced at this venue that “climate disclosures must become comprehensive, climate risk management must be transformed and sustainable investing must go mainstream”. Carney then took on a more threatening tone by saying “the firms that anticipate these developments will be rewarded handsomely. Those that don’t will cease to exist”.

Now Mark Carney has been hailed by the environmental lobby as the leading “eco-warrior” of central bankers and those doing the hailing seem to rarely take notice of the blatant fact that the person who sits atop the technocratic power structure that has given rise to the world’s greatest economic and environmental injustices for decades is also the person designing how this dysfunctional world is supposed to be restructured.

So how do Carney and his fellow hive of central bankers propose the world transform?

For starters, Carney believes that a new global reserve currency must replace the U.S. Dollar.

What should this post-dollar system be based upon? Well, as of August 23, during a central bankers’ summit in Jackson Hole Missouri, Carney stated that it should be modelled on Facebook’s cryptocurrency the Libra, which is scheduled to start issuance by early next year. Unlike the Libra however, Carney’s cryptocurrency will be entirely controlled by private banking institutions and totally removed from sovereign nation states, which are just too influenced by short term political interests rather than an “enlightened technocratic elite” who know how to truly think long term.

Knowing that China’s Belt and Road Initiative is increasingly becoming the foundation for a viable new economic order, and knowing that the financial oligarchy’s monopoly over world finance will come undone if that were so, Carney also warned that a crypto-digital currency is the only way to stop the Renminbi from becoming the US dollar’s replacement. Carney called his digital solution to be a “synthetic hegemonic currency… through a network of central bank digital currencies” which would base their value upon new standards not existent in the 1971-2019 globalized model.

In a 2015 Lloyds of London Speech preceding the Paris COP21 Climate summit, Carney stated “the desirability of restricting climate change to two degrees above pre-industrial levels leads to the notion of a carbon “budget”- an assessment of the amount of emissions the world can “afford”.

This statement essentially defines the parameters which Greta and her minions of green followers are being induced to call for as a new “post-consumerist” world of monetary valuation while actually merely destroying what little remains of a middle class and empowering an already entrenched oligarchy.

Like all good lies, this one hinges upon a truth.

Carney and the green new dealers recognize that pure “market demand” has totally failed as a standard of assessing “value” of money or any other primary asset in our economy. $4.5 trillion of currency speculation grows like a cancer every day without any positive payback to the real economy while $700 trillion of derivatives hover like a Damocles sword over the world waiting to fall at any moment that “market confidence” disappears as it did in 2007.

But after that truth is acknowledged, what does the “carbon budget” entail which professes to somehow lower the world temperature to within two degrees of pre-industrial temperatures which we must assume to be a solution to an under-defined problem?

According to the Green New Deal proposed by Carney and his allies, in order to bring world carbon dioxide production down to net zero emissions by 2050 as demanded by COP21, several things must happen.

By acting on a purely emotional state of fear and panic as Greta demands we do, Carney-ite technocrats hope that no one bothers to shine light upon the blatant scientific fallacies underlying the entire “green new deal” which the Bank of England is proposing the world adopt.

We must ignore the fact that the “99% of scientists who all agree that global warming is caused by human activity” is really only based upon a survey of 79 anonymous scientists (77 of whom believed in the claim).

We must believe that it has been proven that CO2 is a cause of climate variation, even though all long term measurements of climate and temperature indicate that CO2 follows rather than precedes temperature changes.

We must also believe that this reduction in humanity’s contribution of CO2 to the entire greenhouse effect (which accounts for less than 0.1% of the total) would have any impact whatsoever upon a 2 degree reduction of the global mean temperature from pre-industrial levels (which we have no ability to assess anyway).

We must ultimately assume that perpetual economic growth is a delusion which only fools believe in and that population growth is a problem which must be corrected by a technocratic elite who have the “stomachs to handle the bloodletting”.