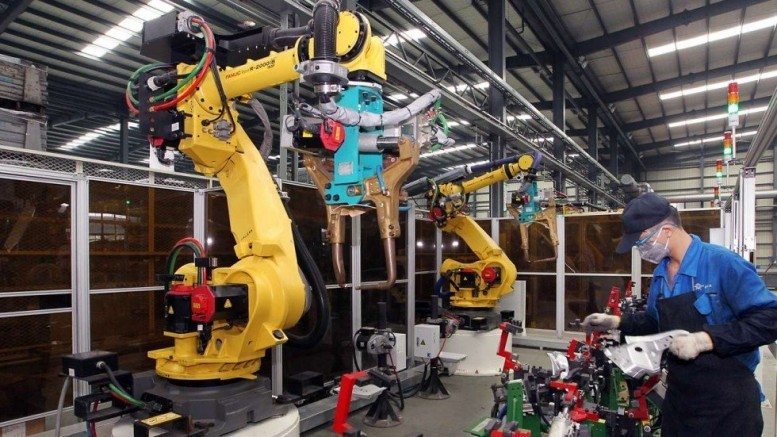 TN Note: Six hundred companies in the Jaingsu province are axing headcount by replacing jobs with robots. This tsunami is headed straight for American shores, and promises to devastate the U.S. labor market. Just ask yourself the question: “What company would not employ robots to stay competitive with other companies who already did it?” The answer is every single one. If business were anything other than profit-driven, there might be ethical concerns about what this will do to society. Business is cutthroat, unfortunately, and would gladly sell anybody’s job for a small differential. Remember also that China is already a Technocracy in many areas, especially in manufacturing.

The manufacturing hub for the electronics industry, Kunshan, in Jiangsu province, is seeking a drastic reduction in labour costs as it undergoes a makeover after an industrial explosion killed 146 people in 2014.

he county, one-seventh the size of neighbouring Shanghai and the mainland’s first county to achieve US$4,000 per capita income, was adjudged the best county for its economic performance by Forbes for seven years in a row.

More than a year on, the county, which attracts much of its investment from Taiwan, is trying to reinvent its growth strategy. It is accelerating growth by replacing humans with robots and encouraging start-ups.

“The Foxconn factory has reduced its employee strength from 110,000 to 50,000, thanks to the introduction of robots. It has tasted success in reduction of labour costs,” said the department’s head Xu Yulian.

“More companies are likely to follow suit.”
As many as 600 major companies in Kunshan have similar plans, according to a government survey.

The job cuts do not augur well for Kunshan, which had a population of more than 2.5 million at the end of 2014, two-thirds of whom were migrant workers.

Factories and other buildings cover about 46 per cent of the land – a figure which is far higher than the cap set by the central ­government.

The local government, which was reshuffled after the blast, has promised to maintain zero growth in land development and decrease its population by 2020.
Kunshan’s latest growth figure is far from impressive.

The county grew by less than 3 per cent in 2014 and 2015 amid the central leadership’s bid to restructure the world’s second largest economy into a greener, more tech-intensive one.

Xu Xujiong, head of a local firm, Huaneng Welding, reflected on the hard times faced by the local units owing to the transition.
“Our profits dipped sharply over the past year,” he said.

This is the wave of the future! We will have products made which represent a tiny fraction of the work-hours which were formerly need to produce them. We shall want to consider how we are going to let those who become unemployed survive when their labor is not needed.
W.

Walter, you cannot afford to be naive about the 4th Industrial Revolution, aka Sustainable Development, Green Economy or Technocracy. Greedy corporations only want profits. Human consideration is not in their thinking. For short-term benefits to the bottom line, they see no problem in installing robots who are economically intert. With 35% of the American workforce having left the job market altogether, how much more displacement can we suffer without total implosion? The fact is, everywhere that Sustainable Development is seen being put into practice, it is creating pockets of economic destruction. I would encourage you to read my book, Technocracy… Read more »

Obviously, unemployed people can’t afford products. I hope everyone understands that wireless frequencies, and mandatory vaccines, and dangerous foods are already deployed so that there won’t be unemployed people, they won’t be here. It doesn’t matter whether we agree or not, the future for our families is survival, not prosperity. The correct action is unplugging and local self-sufficiency, in my opinion. Thanks to Pat for helping us see the dangers.