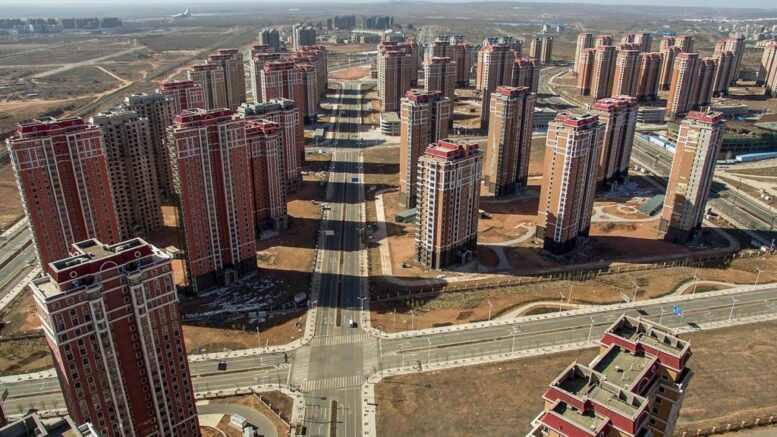 Posted By: James Dale Davidson via The Epoch Times January 25, 2022

Please Share This Story!
PDF 📄
I have long claimed that China morphed into a Technocracy starting in 1978 when National Security Advisor to Jimmy Carter, Zbigniew Brzezinski, brought Chairman Deng Xiaoping and China out of the economic dark ages. Today, Chinese Technocrats just keep building things, even though there is no demand or need to do so. ⁃ TN Editor

As of 2016, China’s empty apartment units could house New York City 27 times over.

What does this mean to you? There are a lot of effects from wasting so many resources. As you delve into a thought exercise to get more acquainted with the ruinous consequences of credit bubbles, be grateful you don’t really have to worry about malicious genies magically tagging you with mortgaged deeds.

That could be scary. Imagine that some cruel genie took a perverse dislike to you. What worse instance of malevolent magic could the genie perform than to present you with deeds to the astonishing inventory of 70 million empty apartments structures accumulating dust throughout China.

You might think it would make you a billionaire, a real estate magnate on par with Donald Trump. But think again.

This may be a good moment to retell an uncharacteristically charming story Trump told about himself, dating to the savings and loan crisis of the late 1980s and early 1990s. That was a time when 1,043 out of the 3,234 savings and loan associations in the United States failed as they tried to digest billions in over-mortgaged real estate properties.

At that time, Trump found himself walking the streets of the Upper East Side of Manhattan one evening with his girlfriend. As they walked, they came upon a bum in a tattered peacoat lying on a grate. Trump remarked to his companion, “That guy has $1 billion more than I do.” She responded, “But he doesn’t look like he has a penny.” Trump replied, “He doesn’t.”

When he said that, Trump’s fortune was hostage to the banks to which he owed about a billion dollars more than his properties would have realized in a fire sale. I describe this “as an uncharacteristically charming story,” because Trump is hardly famous for making jokes at his own expense. Nonetheless, he confirmed to me in a conversation that the above account I share with you is valid. It shows Trump humorously acknowledging the implications of double-entry bookkeeping at his best.

With that in mind, how could you afford to pay the construction mortgages on 70 million apartment units with no residents deeded to you by the evil genie? A challenging question. You would have to do some fast talking with the Chinese banks of the sort Trump managed with New York banks decades ago during the S&L crisis.

Your only hope of avoiding being sucked into a black hole of debt defaults would be to hire some creative scoundrels disguised as accountants to help you persuade the banks to lend you additional billions (or more, probably trillions) to postpone the day of reckoning. Note that the extent to which you could succeed would only worsen the ultimate malinvestment problem. Your assets wouldn’t be enhanced in any way by being encumbered with additional debt; they would just become more costly.

Could you keep kiting the debt?

That’s at least a $36.4 trillion question. Maybe a $45.9 trillion, or possibly even a $116.6 trillion question. The correct answer depends on China’s actual debt level. Unlike Trump’s challenge of three decades ago when the systemic debt issue was denominated in billions of dollars, the Chinese bad debt problem is 1,000 times worse.

Forbes reports the estimate of professor Victor Shih of the University of California–San Diego, who believes that Chinese official debt figures have proven woefully inadequate.

If so, that hints that the end is near. However, as rough as that sounds, the actual situation may be even worse.

If you are a connoisseur of forbidden truths, as I am, you don’t take official figures at face value. You keep digging for tells that reveal the real story. I’m convinced that Chinese government statistics are as bogus as those in the United States. And more so.

Professor Christopher Balding of Peking University’s HSBC Business School, an authority with good sources in the People’s Bank of China’s (PBOC) Financial Stability Board, recently did some subversive arithmetic combining “on balance sheet assets” with “off-balance sheet assets.” Remember, while debts are liabilities to the borrowers, they are assets to the lenders.

He concludes that total debt in China is a breathtaking 833 percent of GDP. That means a debt of roughly $116.6 trillion.

“As of 2016, China’s empty apartment units could house New York City 27 times over.”

Lets make good use of those empty apartments. Let them be used to house the worlds Commies (and NAZIS). And we’ll start with the USA……..time to Clean House and ship ‘our Commies’ to China!

This idea is actually mentioned in the book “1984,” here are 2 pertinent quotes: “to keep the wheels of industry turning without increasing the real wealth of the world. Goods must be produced, but they must not be distributed.” “The essential act of war is destruction, not necessarily of human lives, but of the products of human labour. War is a way of shattering to pieces, or pouring into the stratosphere,or sinking in the depths of the sea, materials which might otherwise be used to make the masses too comfortable, and hence, in the long run, too intelligent. Even when… Read more »