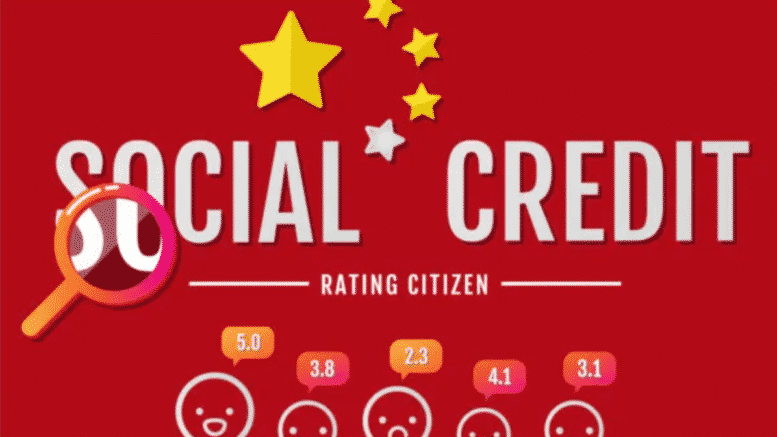 Posted By: Mimi Nguyen and Jan Jekielek via The Epoch Times March 3, 2022

Please Share This Story!
PDF 📄
It is increasingly recognized that “birds of a feather, flock together.” The common ground between Big Tech in America and China’s social engineers is that they are all Technocrats. They view themselves as the only qualified people to run the world as a social engineering project. ⁃ TN Editor

Big tech companies are doing the bidding of the U.S. government in actions that mirror China’s social credit system, and Americans must recognize what’s happening and take action, according to Kara Frederick, a former Facebook intel analyst and a research fellow at the conservative Heritage Foundation.

Frederick recently authored a Heritage Foundation report titled, “Combating Big Tech’s Totalitarianism: A Road Map,” which details how Big Tech has wielded its power to censor Americans. The report proposes a range of actions Americans can take to counter the situation.

She cited a few examples, including in earlier February, when White House press secretary Jen Psaki, at a press conference, urged Spotify and other major tech platforms to take further action to stamp out what the Biden administration deemed as “COVID-19 misinformation.”

It’s not the first time Psaki told big tech companies what to do, Frederick noted. In July 2021, Psaki and Surgeon General Vivek Murthy at a press conference urged social media companies to combat what the Biden administration called “health misinformation.” At the time, Psaki singled out 12 people whom she said were “producing 65 percent of anti-vaccine misinformation on social media platforms.”

“All of [the 12 people] remain active on Facebook, despite some even being banned on other platforms, including Facebook—ones that Facebook owns,” Psaki said at the time. A day later, Psaki said, “You shouldn’t be banned from one platform and not others … for providing misinformation out there.”

Frederick noted that within a month, all of the users and accounts were booted off the Facebook platform.

In January, President Joe Biden said he was making a “special appeal” to social media companies and media to “deal with misinformation and disinformation,” and in early February, Secretary of Homeland Security Alejandro Mayorkas had issued a terrorism advisory not just against so-called misinformation about COVID-19, but also in the context of election integrity and election security, Frederick also noted.

“This is becoming pervasive and big tech companies are the willing agents for the government to have really a heavy hand on the American people,” Frederick said.

“So absolutely, this is a coming totalitarianism, these practices are, frankly, mirroring that of what China does in the social credit system,” she continued. “You have to remember that [it] started with private companies as well and specific provinces in the financial sector.

“So I think it’s extremely important for Americans to get their guards up and recognize what’s happening as it’s happening today.”

In the interview, Frederick explores how tech companies have repurposed certain tools that were originally meant to be used to combat national security threats, to now quash dissenting viewpoints, or anything the U.S. government calls “misinformation,” “disinformation,” and “mal-information.”

“I believe that there are genuine problems on these platforms, right? Human trafficking, advertisements for drug cartels … child sexual abuse, material, child exploitation and pornography, and real foreign Islamic terrorist content. Those are real issues, not to mention state-linked influence operations, where you have bots that are farmed out to patriotic citizens by the CCP, the Chinese Communist Party, to spew bile all over the internet or cheerlead for the CCP. … So it’s very important that we do have people within these companies working on that.”

Frederick previously helped create and lead Facebook’s Global Security Counterterrorism Analysis Program. In the beginning of her career, she had spent six years as a counterterrorism analyst at the Department of Defense.

She observed that on the social media platforms, there appears to be a “very troubling trend” whereby more resources are being allocated toward regulating right-leaning content and dissenting content.

“No more demonstrative examples exist other than the Hunter Biden laptop story [and] the lab leak from the Wuhan Institute of Virology—these two things were considered misinformation at the time and you would be censored, suspended or banned from Facebook and Twitter and other social media.”

What’s furthermore troubling is an apparent effort to link disinformation with terrorism, such as with the recent Department of Homeland Security (DHS) advisory or the Justice Department’s establishment of a new unit to combat domestic terrorism, Frederick said.

“These institutions have definitions for a reason,” she said. “They call things terrorism for a reason. Because you can, once you label something terrorism, you can then mobilize the robustness of the entire U.S. national security apparatus developed in the wake of the September 11 attacks.

Frederick advises Americans to explore platforms created by new entrants. “I won’t name them specifically. But I think we’re starting to see these competitors come up as they recognize the challenge as they try to take on [the] monopolistic practices of these big tech companies,” she said.

“Make sure that your privacy is first and foremost as well—so using companies that are actually devoted to privacy,” she added.

The wanton censorship is not limited to social media companies, Frederick said.

“We know that 17 digital platforms mobilized within two weeks in early January to suspend or ban President Trump from their platforms. It can happen to the everyday user as well,” she said. “So I think it’s critical that we realize it’s not just social media companies, but it’s every aspect of your digital life, which is life into perpetuity.”

Americans, including members of Congress, need to understand that big tech companies are infringing on Americans’ constitutional rights, such as freedom of speech, “especially when [Big Tech is] working with the government.”

“Instead of saying ‘they’re private companies, they can do whatever they want,’ recognize that that’s a problem,” she said.

Also, big tech platforms need to truly embrace American values again and recover a sense of duty to the country, and U.S. lawmakers can kickstart the process by “being brave, calling out [Big Tech], recognizing that this is a problem and taking measures to rectify it,” she said.

Frederick said she was “struck” by how big tech platforms such as Facebook showed a “lack of both gratitude and cognition” of how they thrived and flourished under an American system.

“Because of America, [these big tech platforms] were able to amass all of this largess, and innovate and build all these really interesting things for the people of the world,” she noted. “I recognize that they’re global companies, but when it comes to the reason why they’ve been so successful, it’s because of America and our unique system. I think companies need to recover a sense of being American again. … Recovering that sense of a duty to America, and a gratitude for what it’s been able to do and create for these executives and the people who work under them.”

She said that Big Tech’s ties to the CCP pose a major hurdle to this effort, and believes Congress needs to pull the companies in line.

Congress, in its current state, will do nothing to stop the collusion between government and corporations–the technocracy. Hell, 1/2 of them are and have been on board making money from their insider covid investments. The totalitarian covid tool that brought them their financial opportunity will never be denied. If you notice right now, they are all wriggling in their inscrutable seats of power trying to figure out how they can lie, cheat and steal enough to get re-elected. “Let’s all be friends; let’s not have divisions, let’s see who each other really is?” Yeah? BITE ME. This is the central… Read more »

Why Kissinger, and people like Soros, weren’t even imprisoned, and/or just exiled into the Eastern Bloc that they worked with, is the question people need to be asking. Listen to him here, and it’s this same rhetoric for decades. People taking part in this- he’s already talking about an ‘Eastern Martial Plan greeted warmly in the US.’ From countries chock full of slave labor. And it isn’t because they are ‘poor’- it’s because they just don’t have civil rights standards, they don’t have the same history, arguments, battles over certain things. And you have a bunch of brats in the… Read more »