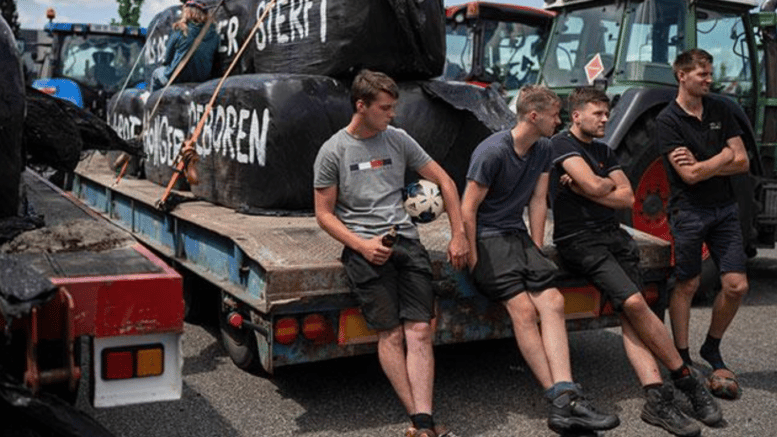 Please Share This Story!
PDF 📄
Farmers have been declared to be the scapegoats of the mass formation of global warming loons and destroying food production is at the top of their list. Any nation that has bought into this madness is attacking the very means of our survival – food. The world is at war but nobody is crying out.

In America, farmers are under unprecedented attack but so also are food processing plants. The fact that the entire universe of disingenuous fact checkers have labeled all of this as conspiracy theories is proof enough that we are indeed at war. ⁃ TN Editor

The most efficient system in history of growing food and getting it to consumers, modern farming, is under attack, blamed for causing climate change.

Dutch Government to Farmers: Reduce Your Operations by Up to 95 Percent

The world has watched as Dutch farmers fight for their economic survival against demands that they shrink their operations to suit the government’s climate change agenda. The Dutch government has told farmers to cut ammonia emissions by 50 percent, and those near protected areas must reduce their operations by as much as 95 percent, or they must sell their land to the government and face a lifetime ban from farming.

Dutch Farmers have responded by spraying government buildings with manure while Dutch police shot at a 16-year-old boy at a demonstration.

Jos Ubels, Vice President of the Farmer’s Defense Force in the Netherlands, says negotiations are not going anywhere and a bad situation is continuing to escalate.

Farmers from around the world who are also seeing their way of life under attack have demonstrated in solidarity.

American farmers, who are already subject to a host of regulations, could also find themselves facing even more restrictions. But the island nation of Sri Lanka serves as a cautionary tale.

Sir Lanka: A Warning to Politicians Who Want to Restrict Farming

Sri Lanka’s ban of chemical fertilizers in farming caused the struggling nation’s agricultural sector and economy to collapse. It ended with protestors frolicking in the presidential swimming pool after nation’s president fled the country.

Sri Lanka was supposed to be the poster child for modern organic farming. The World Economic Forum even proudly posted an article about Sri Lanka’s expected success, written by the prime minister whose house was set on fire by protestors.

Parts of the world already face famine because of a shortage of chemical fertilizer due to Russia’s invasion of Ukraine – the same kind of fertilizer environmentalists want to reduce.

Is the Biden Admin About to Launch a Similar War on American Farmers?

Washington Attorney Gary Baise, who helped start the Environmental Protection Agency in 1970 and now says it should be abolished, owns 11 farms in Illinois. He calls what the Dutch government is trying to do to its farming sector “madness,” and sees signs a similar movement is coming to the U.S.

“Agriculture is an easy target, both from the animal standpoint and from guys like me who put a lot of anhydrous ammonia on their corn crop,” Baise said. “They’re going after methane, which is belched by cows. You know, AOC [Rep. Alexandria Ocasio-Cortez, D-NY] has it wrong. They do not F-A-R-T methane. They belch it.”

Baise believes the era of cheap food at the grocery store is over, not just from inflation but because of growing environmental regulations on farming, and says Sri Lanka should be a warning to leaders who want to experiment with food production.

“That’s what happens when you don’t have food,” Baise warned.

Nevertheless, the Biden Administration appears to be coming after farmers. Steve Milloy, editor of the website Junkscience.com, writes that a new study by the EPA claims that air emissions from farms, basically farm dust, kill 17,000 Americans per year, the same EPA standards that basically killed the coal industry.

When Farming is Attacked, the Global Food Supply Suffers

Former U.S. ambassador to the Netherlands Pete Hoekstra says if the Dutch government wins this battle against its own farmers – who are the second largest exporters of agricultural products in the world behind the United States – it will only make the global food shortage worse.

Hoekstra warns, “The Dutch will not experience food shortages, but there may be other parts of the world that will, because you know, this food is going to go away.”

Any politician willing to risk the food supply in order to fight climate change might want to keep Sri Lanka in mind.

If Biden’s aim were to weaken the defenses of the United States against invasion from abroad he could not have done a better job.

Without a doubt that is his aim!

I’ll refrain from implying that you may have been under a rock for an extended period.

But no, this isn’t the best he could have done to weaken the country, but the plan hasn’t been fully realized. Give it a few months. Give it the winter. The winter will be the time most likely to remind us all of what we think the apocalypse should be like.

First of all, farmers were always a part of the plan. When society turned from people growing all of their own food, farmers made it possible to do so, which meant that taxes could then be collected from all people, because they would have to get jobs that didn’t entail maintaining their own crops and livestock, etc. So, farmering is something that should never have happened en masse, but the “elites” wanted it, and of course what they want they get. Now, all of your food is in the hands of other people and corporations, and ripe for the pillaging.

I would tend to agree on this, it was the chemical agriculture industry and the global elites who wanted to have control over everything including the food and money supply, it is in fact Nazi chemicals and Nazi technologies that got us where we are in this mess. If our governments had not been actively in the business of suppressing all life for decades we would not be seeing countries going into decline just for being told to use organic fertilizers, we would have already been doing that! Why is this turning into an attack on organic farming is the… Read more »

And from the article, Ubels talks about democracy. Democracy is the ability to vote. It doesn’t denote or connote any kind of rights. In fact, it is one of the planks of socialism. Read something, folks. The communists saved Europe. Remember that? No, neither do I.

GOOD POINT BUT….LET’S BEGIN WITH THE ACTUAL DEFINITION. 1 a : government by the people especially  : rule of the majority b : a government in which the supreme power is vested in the people and exercised by them directly or indirectly through a system of representation usually involving periodically held free elections OUR RIGHTS ARE GUARANTEED BY THE CONSTITUTION – NOT VOTING OR OUR FORM OF GOVERNMENT. THE CONSTITUTION SAYS OUR RIGHTS ARE “GOD-GIVEN RIGHTS” TO BE PROTECTED AND DEFENDED BY OUR GOVERNMENT. OUR FOUNDERS BELIEVED THAT “GOD-GIVEN RIGHTS” COULD NOT BE TAKEN AWAY, WERE NOT “PRIVILEGES” BUT RATHER WERE OUR RIGHTS. WHAT OUR GOVERNMENT HAS… Read more »