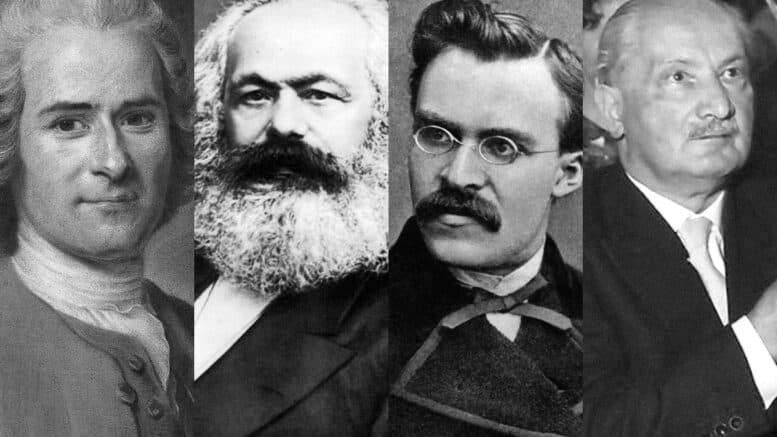 Please Share This Story!
PDF 📄
Critical Theory rejects reason and gave birth to genocidal ideologies that killed millions in the last century. Critical Race Theory is the modern extension that pits major sections of society against each other and the outcome is predictable unless it is thoroughly rejected by all sides. Technocrats fan the flames of CRT in order to destroy the status quo and free market economics. ⁃ TN Editor

By now, most Americans have heard of critical race theory. But many do not know just how radical or pernicious CRT is — because, as a new study from the American Enterprise Institute shows, the media does not explain its key tenets in its coverage. So I asked one of our nation’s preeminent historians, Princeton University professor Allen C. Guelzo, to explain CRT and why it is so dangerous.

Critical race theory, Guelzo says, is a subset of critical theory that began with Immanuel Kant in the 1790s. It was a response to — and rejection of — the principles of the Enlightenment and the Age of Reason on which the American republic was founded. Kant believed that “reason was inadequate to give shape to our lives” and so he set about “developing a theory of being critical of reason,” Guelzo says.

But the critique of reason ended up justifying “ways of appealing to some very unreasonable things as explanations — things like race, nationality, class,” he says. Critical theory thus helped spawn totalitarian ideologies in the 20th century such as Marxism and Nazism, which taught that all human relationships are relationships of power between an oppressor class and an oppressed class. For the Marxists, the bourgeoisie were the oppressors. For the Nazis, the Jews were the oppressors. And today, in 21st century America, critical race theory teaches that Whites are the oppressors.

In CRT, “all White people are instinctively white supremacists,” Guelzo says, adding, “I say ‘instinctively’ because this is not a function of reason.” This is why its advocates talk about “systemic racism” — a CRT term that has crept into our public discourse and has even been embraced by President Biden. “Systemic sounds like systematic, except of course that it isn’t,” Guelzo says. “When you try to find something that is systematic, then you have to go find evidence.” But “systemic implies something so deep and so instinctive that you’re not even conscious of it. … [that] there is an instinctive bias that is built into people of certain colors.”

CRT rejects democracy as a “relic of Enlightenment reason,” Guelzo says, and argues that White people “use tricks like democracy and the search for truth … to exploit and oppress and dominate people of color.” Don’t take his word for it. Richard Delgado and Jean Stefancic, authors of “Critical Race Theory: An Introduction,” state that “critical race theory questions the very foundations of the liberal order, including equality theory, legal reasoning, Enlightenment rationalism, and neutral principles of constitutional law.”

Because critical theory rejects reason, it cannot be questioned. Under this rubric, Guelzo says, the only purpose of questions is to serve the interests of the oppressive class, and “any answer you come up with, which doesn’t speak in terms of some hidden structure of oppression, can simply be dismissed as part of the structure of oppression.” For example, “if you believe, as the Nazis did, that the Jews are responsible for all political and economic events, then my pointing out that the overwhelming majority of political leaders are not Jews merely shows that I am either a dupe of the Jews or that I’m in on the fix.” Similarly, if you question whether all White people are oppressors, “the questioning itself is an example of how you’re in on the oppression.”

“…White people “use tricks like democracy and the search for truth…” since we’re celebrating reason here, I might as well point out: 1. the truth isn’t democratic, but is what it is regardless of who agrees with it or not; 2. A search for the truth is non-sensical; for if the truth is somewhere out there in the future, then how could we know we were on firm ground right now and headed at least somewhat in the right direction? This of course isn’t to say that I agree with Critical Theory; in fact, I agree with it less. For… Read more »