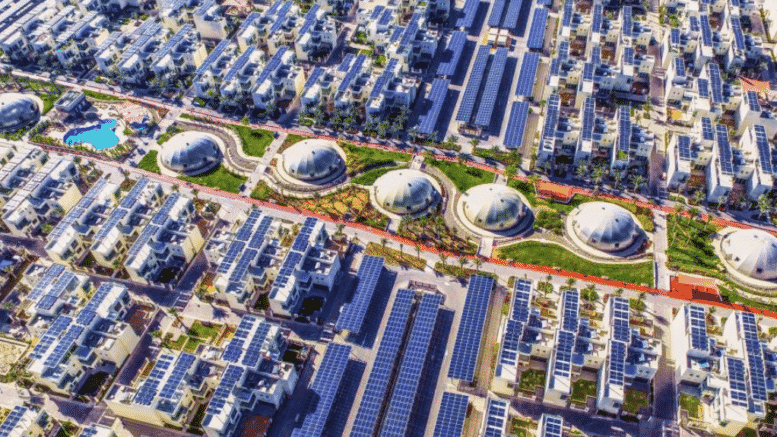 Please Share This Story!
PDF 📄
The Arab world wants to be the global leader in green living and technology. This new city is called “Sustainable City” and was built from the ground up to be 100% sustainable. It only houses 3,000 people, in luxury, of course. ⁃ TN Editor

Fenced off by a wall of trees, about 20 km from the high rises towering over Dubai’s city centre, there lies a small solar-powered settlement aiming to become a green oasis in the desert.

Renowned for its glitzy skyscrapers, air-conditioning-blasting shopping malls and indoor skiing facilities, the emirate of Dubai has long been the antithesis of sustainability to environmentalists.

But the United Arab Emirates (UAE) plans to change that reputation, with a range of projects aimed at having more than 40% of the country’s energy come from renewable sources and cutting consumption by the same margin by 2050.

Opened to the first residents in 2016 and to be fully completed next year, the initiative dubbed Sustainable City is a private settlement on the outskirts of Dubai designed to use as little energy and water as possible.

Comprising 500 low-lying villas that are home to nearly 3,000 people, as well as commercial spaces and a mosque, the city aims to be a “net-zero” settlement, producing all the energy it needs from renewable sources on site.

“The Sustainable City is a living laboratory for testing future technologies and solutions,” said Karim El-Jisr, head of SEE Institute, the research arm of the city’s developer, Diamond Developers.

When the project started six years ago, building a zero-energy development “seemed a bit like a dream”, he told the Thomson Reuters Foundation.

“Today it is not difficult anymore, tomorrow everybody will have to do it,” he added.

From neighbouring Masdar City to the Qatari capital Doha, it is one of several developments launched across the region in recent years that aim to serve as a model for environmentally- friendly living in the Middle East.

Houses, offices and other buildings are responsible for about 40% of planet-warming emissions globally, according to the think tank World Resources Institute (WRI).

The issue is particularly relevant in the UAE, said Emma Stewart, who leads WRI’s urban efficiency and climate programme, with World Bank data showing that the country has one of the highest per capita carbon footprints in the world.

About 75% of all electricity produced in the UAE is sucked up by buildings, mainly to fuel air-conditioners that keep locals fresh during the scorching summer months, Stewart said.

“They have an immense need for cooling to keep the population within their comfort range,” she said in a phone interview.

In the Sustainable City, residents zig zag through the streets on bicycles or aboard small electric carts, under the shade of the palm trees flanking the strips of square, white houses. Cars are banned from most of the area.

All buildings and parking spaces are topped by solar panels which feed the energy they produce into the grid, allowing residents to pay only the difference between what they produce and consume, according to the developer.

Residential units designed to avoid direct exposure to the sun and covered in paint that reflects sunlight to keep the heat out, while wastewater is recycled to irrigate green areas, El-Jisr said during a visit to the site.

Resident Belinda Boisson said she paid more rent than the Dubai average but, besides sustainability, the development offered a family-friendly environment and sense of community that was rare to find among Dubai’s high rises.

“(Children) can play outside without me worrying about my daughter being hit by a car,” said Boisson, a 46-year-old expat from South Africa.

Very nice development and the lesson is? Throw enough money (multi-billions) at anything and you can make it happen. If they threw a bit of that money toward building sustainably underground for both protection and constant temps they’d be even more sustainable than being on the surface. Desert vipers live underground–no pun intended.

There are a couple of issues that bug me about this. One, the desert sand will be on those photo cells in a heartbeat. They have to be cleaned all the time in order to function properly. Also, it isn’t the cells that are expensive, but the batteries that collect the energy and convert it to electricity. Not only are the batteries expensive, but their manufacture and disposal are far more damaging to the environment than the alternative – fossil fuel electricity. Dubai and the Arabs have money pouring out of their pockets, so this doesn’t put a dent into… Read more »