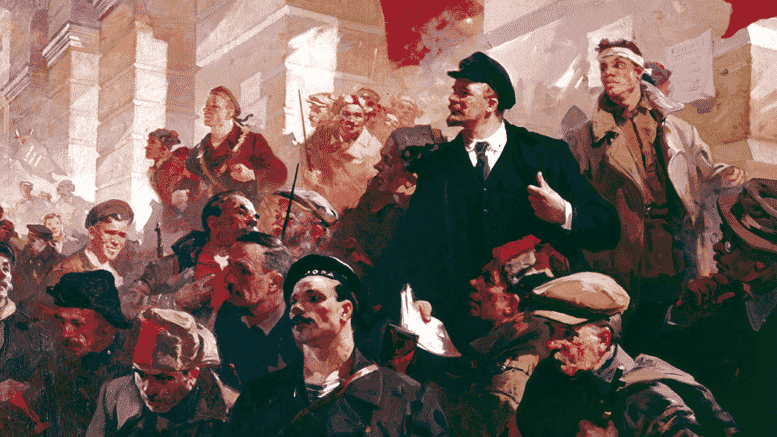 Lenin’s address at the Finland Station, Petrograd, 1917, by Nicolai Babasiouk, 1960.

Please Share This Story!
PDF 📄
In every conceivable way, climate and pandemic alarmism are dancing to the same music while racing toward the same common goal of Sustainable Development, aka Technocracy. TN first revealed this within days of the very start of the COVID-19 panic.

To survive the schemes of these eco-tyrants, their titanic war against Capitalism and Free Enterprise must not be ignored or underestimated. America’s future will be determined by our near-term response.  Inaction on our part means victory on their part. ⁃ TN Editor

The global response to the coronavirus pandemic, which justified massive incursions into civil liberties in the name of public health, offers a model for how to address climate change, Mr. Malm contends, by taking decision-making out of the hands of individuals and delivering it over to the state.

In an interview published Monday with the leftist magazine Jacobin, Malm, who runs the master’s program in human ecology at Lund University, suggests that the moment may have finally arrived to empower governments to dramatically rearrange the world economy to stop climate change.

“There was a moment in March 2020 when many of us in the climate justice movement felt a degree of surprise to find that governments in Europe and elsewhere were prepared to basically shut down their entire economies in an effort to contain the pandemic,” Malm notes. “This is striking, given that the same states had never contemplated undertaking any kind of intervention in the economy for the sake of the climate crisis.”

The reason for this difference in response, Malm suggests, is that the coronavirus disproportionately struck the rich, whereas the effects of climate change seem to never reach the affluent. Moreover, the lockdowns were a luxury that the rich could afford, whereas the poor and middle class suffered their effects more acutely.

“This is a moment where we can say to governments: ‘If you were able to intervene to protect us from the virus, you can intervene to protect us from the climate crisis as well, the implications of which are much worse,’” Malm proposes. “The current juncture therefore provides us with an opportunity to oppose the return to business as usual, to push for the transformation of the global economy and the launch of something like a Green New Deal.”

Malm rues the “sudden obliteration of the climate justice movement” effected by the coronavirus in terms of environmental movements such as Fridays for Future, Extinction Rebellion, and Ende Gelände.

“Prior to this, there had been a growing momentum toward aggressively disrupting business as usual, and while there have been attempts to temporarily move these actions online, there is simply no way to exert the same kind of pressure through digital means,” he laments.

In analyzing which political forces will be best positioned to benefit from the situation of mass unemployment and social dislocation wrought by the lockdowns, Malm suggests that “it will be the far right, simply because it was in a much stronger position prior to the outbreak of COVID-19 and also because the pandemic has reinforced certain nativist political paradigms, in terms of closing the borders, putting one’s nation first, and a suspicion of foreigners.”

Politically, therefore, “there can be no climate mitigation without a massive defeat of the far right in advanced capitalist countries and in many developing states as well,” he contends.

“A successful strategy to address the climate crisis will need to find a way to weave together environmental justice, working-class struggle, and opposition to the far right,” he declares, and yet the actual destruction of fossil capital itself, including the closure of coal mines and the termination of mass aviation can only come about through “increased state control over large swaths of the economy.”

The sort of dramatic change that is needed is “totally impossible to do simply by tinkering with market mechanisms or introducing some carbon taxes; rather, it will require a massive expansion of state ownership and comprehensive economic planning.”

What I’ve been trying to figure out is why hasn’t taken the US out of the UN as he said he would? All I have heard him do is bad mouth them. Why does he keep hiring the same old members of the so called “deep state”? What is his newest mandate concerning our police force? How is that suppose to help all policemen everywhere? We certainly need to support our policemen. Why doesn’t he go after the BLM and Antifa? Policemen could control these monsters by doing what they did back in the 60s. They turned on the fire… Read more »

Sorry I left out the name President Trump in my email. It’s very late at night and I posted before I read what I had written. Again, I’m sorry.

Unless and Until WE THE PEOPLE can rest assured that, Our Enemies of State with-in, embedded or otherwise, ARE NOT ABLE TO UTILIZE, and or continue utilizing different DARPA programs such as HAARP to HEAT THE IONOSPHERE, thus creating Actual Global climate manipulations, are Not being used (as a weapon) as a climate change creator, there will be Revolutionary level revolt by those Patriots whom are considered “Deplorables”!