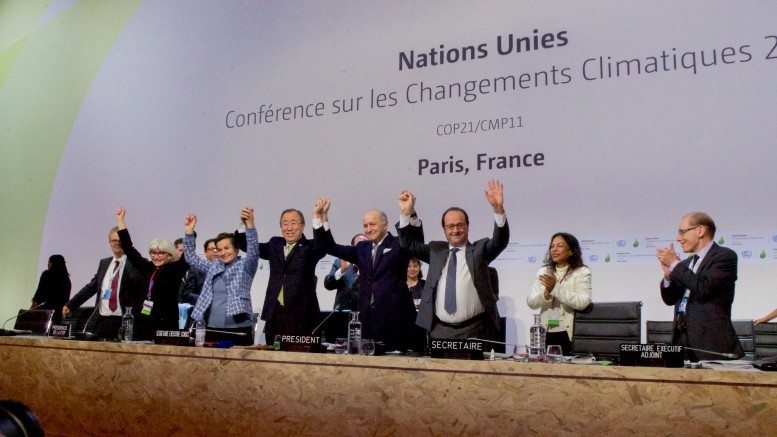 TN Note: Disingenuous as it is, Climate Change promoters continue to run the confidence game that fighting CO2 is the only way to transform the world into Sustainable Development. In other words, the plan to kill Free Enterprise and Capitalism in favor of Technocracy is the only outcome being offered to a “dying planet.” Will citizens of the world wake up to this massive theft of planetary assets? Only time will tell.

It’s been a few months since the Paris Agreement wrapped up. On April 22, it will be signed by numerous heads of state. The agreement sets crucial goals to limit global temperature increases, and specific goals in three areas – mitigation, adaptation and finance.

Many expected the conference to be a talk shop with not many effective results. Obviously it’s too early for any tangible results to be seen – but the agreement has many positive points.

The long-term goal of limiting temperature increases to 2°C – or a second, more ambitious target of 1.5°C – guides the agreement. Mitigation includes a long-term goal – early peaking, balancing emissions and sinks. The accompanying decision indicates that emissions need to be reduced from 55 gigatonnes (Gt) to 40Gt in 2030, a massive gap of 15Gt.

A new global adaptation goal aims to increase countries’ adaptive capacity and resilience. There are also aims to achieve a finance increase to US$100 billion per year post 2020.

These goals are clearly put in the context of sustainable development and poverty eradication.

Why what happened in Paris is different

The Paris Agreement fulfilled the promise, from the 2011 Durban Climate Change Conference, of a regime applicable to all under the United Nations Framework Convention on Climate Change. The world has finally moved beyond a divide into two groups, the developed and developing countries. Bitter battles were often fought along these lines. Paris reflects differentiation, acknowledging that the world is not the same. But it acknowledges the need to move beyond old divisions and to take action. It expresses differences more subtly, notably on mitigation and finance.

The Paris Agreement encodes a bottom-up approach. If the Kyoto Protocol’s targets were top-down, a defining feature of the Paris Agreement is that nationally determined contributions will add up to the global response. Proposals to take global emissions budgets and divide them across countries were rejected. Adaptation, loss and damage are much more prominent in the Paris Agreement than in previous climate agreements.

Countries’ adaptation plans are mandatory, with a clear emphasis on implementation. Countries should regularly communicate to the international community what they are doing on adaptation, in different forms. Prior to Paris, 88% of the Intended Nationally Determined Contributions included adaptation. The US and EU – with 28 member states – submitted adaptation undertakings. Together, plans and communications will significantly strengthen the information base on adaptation.

Nationally determined contributions (NDCs) on mitigation are obligations of conduct that require domestic measures to achieve objectives. They will be strongly reviewed. Reporting and review is strengthened at individual country level, and the global stock-take will inform further mitigation targets. Longer-term strategies from all parties are encouraged.

The Paris Agreement says all countries should strive to formulate long-term low greenhouse gas emission strategies. South Africa has a peak, plateau and decline trajectory range in its national policy, and put forward mitigation strategies for 2025 and 2030 in Paris. In the next round, it will be expected to include longer-term goals, even if aspirational, for 2050.

A global stock-take will consider mitigation, adaptation and support every five years, based on equity and science, to inform what more needs to be done.

Increasing ambition is crucial because the sum of Intended Nationally Determined Contributions is insufficient to keep us on track for the 2°C limit. The outcome of the stock-take will inform countries’ next actions, support and international co-operation. This global review will consider the collective effort, in the light of equity and science – that is, are we all doing enough, and are our efforts shared fairly?

Transparency is perhaps the strongest feature of the Paris Agreement. The framework applies transparency to both action and support, with the latter needing work. Common modalities will allow flexibility for those developing countries that have less capability to improve reporting and review over time.

The Paris Agreement is a treaty in all but name; it is a legally binding agreement. The nature of obligations within the treaty differ – some are binding and others not.

It is mandatory for each country to communicate mitigation NDCs every five years and to pursue domestic measures to achieve the NDC objectives. Individual financial contributions by developed countries are not binding. Delivering on promises of finance and scaling up overall investment flows will be closely watched – particularly by those who need support. A mandatory review of obligations is expected to strengthen action over time, setting out obligations of conduct and achieving objectives in the case of mitigation. Everyone is expected to do better in each round – what is called “progression”.

It is important to bring more actors into more creative spaces, ensuring a catalytic function for the Convention and perhaps changing it internally. Paris makes further processes complementary to text-based negotiations. It links multiple actors in more creative spaces. This means the agreement might enable action at national level, with many other actors, and allow for international cooperation on cleaner energy.