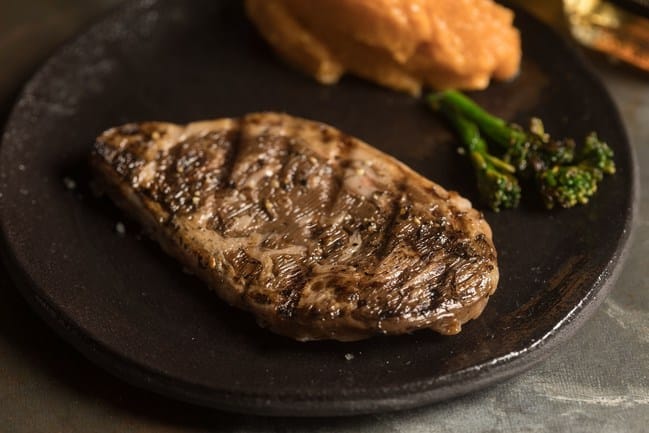 Please Share This Story!
PDF 📄
Technocrat scientists are bent to drive cattle ranching into the dustbin of history, but they fail to recognize the myriad of by-products that are manufactured from cattle. Fake beef will be disruptive to the Ag industry in more ways than one. ⁃ TN Editor

An Israeli company unveiled the first 3D-printed rib-eye steak on Tuesday, using a culture of live animal tissue, in what could be a leap forward for lab-grown meat once it receives regulatory approval.

During the coronavirus pandemic, alternative protein products have soared in popularity, prompting nearly every multinational food corporation to hasten to bring its own versions to market. Frequently plant-based products have been patties or processed nuggets – “everyday” foods easier for companies to produce – that aim to ease the climate effects of the worst offender: Americans eat nearly 50 billion burgers a year, according to the U.S. Department of Agriculture.

Aleph Farms’ new 3D bioprinting technology- which uses living animal cells as opposed to plant-based alternatives – allows for premium whole-muscle cuts to come to market, broadening the scope of alt-meat in what is expected to be a rich area of expansion for food companies. A survey of more than 1,000 U.S. adults, conducted by MRS research company for agriculture company Proagrica, showed that 39% of American consumers have considered going vegetarian or vegan since the pandemic began. Health concerns, climate change and animal welfare are drivers.

Several other companies are sprinting to capture what is expected to be a robust appetite for what is often called “cultivated meat.” San Diego-based BlueNalu has announced its intent to bring cell-based seafood products to market in the second half of this year; Israel-based Future Meat Technologies and Dutch companies Meatable and Mosa Meat aim to have cultivated meat products in the market by 2022, each with proprietary methods of growing meat tissues from punch biopsies from live or slaughtered animals.

But the lack of a regulatory framework could stymie the companies’ race to market. In December, Israeli Prime Minister Benjamin Netanyahu became the world’s first head of state to eat cultivated meat, and that same month Singapore became the first country in the world to grant regulatory approval for the sale of cultivated meat. It remains unclear when other countries will follow suit. In the United States, the Food and Drug Administration has not set a date for when it will rule on the matter.

The new meat-making process, developed with research partners at the Israel Institute of Technology, prints living cells that are incubated on a plant-based matrix to grow, differentiate and interact to achieve the texture and qualities of a real steak. It has a system similar to an animal’s vascular system, which allows cells to mature and nutrients to move across thicker tissue, resulting in a steak with a similar shape and structure to traditional cow tissue before and during cooking.

Who to say when they will be imprinting human beings??

No no and Hell NO! I will never eat anything grown in a lab or made on a 3D printer. Our bodies are designed to eat real food not this fake crap they are churning out.
Is it any wonder why people are so damn sick these days?
Good grief, fake steak?????Really?
I’m off to fire up the grill now in the freezing cold to enjoy a real grass fed and finished ribeye!
Just say NO to fake food, your body will thank you!

I wonder if growth hormones are in this petri dish stuff also?

Yet another attempt at taking us away from the natural world, and forcing a technological “solution” down our throats. What hubris! Oh, and by the way…..will the elites be eating this crap too? Or is it just for us common folk?

But people will buy, if it is cheap enough…

Remember the plant-based meat substitute, Beyond Meat? This one should be called Beyond Disgusting.

No need to pay me royalties for coming up with the name.

They really want to kill by all means, and no one understands that this the truth. And how is this possible. An article by Henry Makow could: they all “brothers” in the same club.

I think I’d rather have a cow.

If this “meat” is grown from “cells” of live animals, then that means that either they are going to make the cells become cancerous, to allow them to reproduce indefinitely, or they will have to have a LOT of animals available to obtain the needed cells ongoing. Either way, it does not make sense to me. Instead, we should have our state and local governments to not only put into laws, but to encourage regenerative farming, which includes animals. The zoning should be be into place to require a certain number of small regenerative farms around populations centers, as well… Read more »

Blechhh! I wouldn’t eat that stuff with a 39 and a half foot pole. I guess if one were in a starship and synthetic printed food is the only choice…but I don’t think I would sign up for that in the first place!