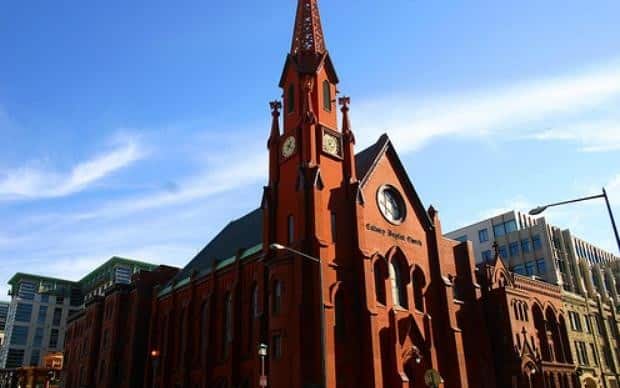 The major global mantra of building global cities (aka Smart Cities) is fanned by so-called Christian churches who are more interested in establishing cities than their own congregations. Pastors of mega-churches have traded their calling to shepherd individuals in favor of  become community organizers to ‘save’ their cities. ⁃ TN Editor

Eric Jacobsen is senior pastor of First Presbyterian Church in Tacoma, Washington. His new book, The Space Between: A Christian Engagement With the Built Environment, makes a compelling case that members of the Christian faith have a special calling to care for cities, and that the form of cities matters to the success of faithful practice.

The Space Between strikes me as important, in no small part because it comes from a movement not generally (albeit sometimes) associated, at least not today, with discussion of the form and structure of our cities, and thus brings what for many will be an unfamiliar perspective to these issues. (Unfamiliar does not equate to unique:  for example, another Presbyterian leader, New York City’s Tim Keller, is eloquent on closely related topics, as is Gresham, Oregon’s Michael Abbaté.)  But The Space Between is important also because ours remains a religious country: three-quarters of Americans identify as Christian, even while a growing but still-small minority consider themselves unaffiliated with any particular religion.

Before discussing the book in more detail, I should disclose my own proclivities: As I elaborated in an article last year, I grew up as a Bible-Belt Methodist, and my immersion in that culture had a profound and lasting effect in shaping my values. While I no longer adhere to a particular faith, I remain interested and comfortable in discussions of church teachings, particularly those with regard to ethics. Actually, I’m kind of fascinated by the whole thing; so I knew I wanted to read this book when I saw it.If I could boil down Jacobsen’s thesis in a few sentences, they would go something like this:

The book’s title comes from Jacobsen’s assertion that, when it comes to the physical form of communities, the spaces between the buildings matter as much as, and often more than, the buildings themselves. I agree. (There is also, of course, a Dave Matthews song of the same name, but it doesn’t come up.) He begins by observing that this view is not widely shared among Americans, who increasingly see “community” as about relationships detached from particular geographic places. Indeed, the rise of ever-more-sophisticated communications technology would seem to be reinforcing these beliefs.

In addition, as Jacobsen elaborates later in the book, in the U.S., cities are up against a deep-rooted anti-urban bias that dates back at least to Thomas Jefferson. Cities and the urban form tend to be neglected even by environmentalists, he asserts, because “green ideology is a rural agrarian ideology.” (He’s increasingly but not entirely wrong about that, in my opinion.) He believes this is mistaken given the relatively smaller environmental footprints of city dwellers, as David Owen’s book Green Metropolis, which Jacobsen quotes at some length, documents.

Jacobsen believes the Holy Bible is on Owen’s side. (In this respect, it is also on my own). He notes that the Bible repeatedly describes humans’ natural habitat and aspiration (though beginning in the Garden of Eden) as in and toward cities:

In John’s vision of the coming reign of Christ, he is given an evocative picture of our lives when our relationship with God is fully restored.  And that picture is not of a garden or a wilderness, but of a city.

Among many additional biblical references to cities, he later quotes the prophet Zechariah:

Thus says the LORD of hosts: Old men and old women shall again sit in the streets of Jerusalem, each with staff in hand because of their great age. And the streets of the city shall be full of boys and girls playing in its streets.

Central to The Space Between is the concept of shalom, which we usually translate simply as “peace” but which he believes contains much more meaning, including restored fellowship, human flourishing, justice, and relational wholeness for everyone. Jacobsen argues that, while each one of us carries a longing for shalom deep within, much of our recently built human settlement “bears not the slightest hint of that blessed condition that is described in the Bible.”

One of the ways in which we fail to move closer to shalom, he continues, is that today we experience our world not with our bodies and senses at human speeds, as Jacobsen believes God intended, but through automobiles and a world designed almost wholly to accommodate them. He cites several biblical passages that suggest something quite different, that walking is central to observant living.

(It is right around this point, by the way – at 9 percent through the text in the Kindle edition – that Jacobsen reveals that he is every bit as much of a planning nerd as any of us, writing about the effect of curb radii on walkability. Later we find discussions of street connectivity, explicitly expressed as intersections per square mile, “the public realm,” and so on. Where was he when we were writing LEED-NDstandards? Jacobsen explains all these concepts quite well to regular folks, by the way, but these revelations suggest that his expressed disapproval of urban planners – whom he blames for much of sprawl – may not be as fervent as he says. And I should be clear that I mean that in an amused, not a critical, way.)