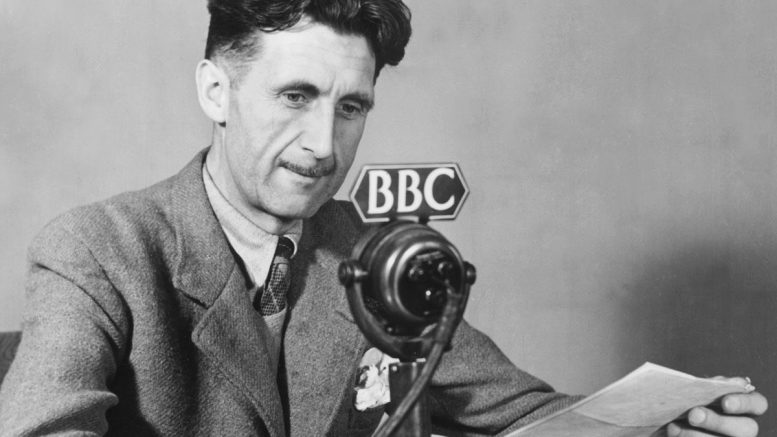 Although the phrase “Big Brother” is a colloquialism in modern language, few understand the George Orwell who wrote Nineteen Eighty-Four in 1948. Orwell had experienced radical Stalinism first-hand and saw the future of political systems if left in the hands of evil men. ⁃ TN Editor

Unlike the first two British dystopian writers, George Orwell was a colonial, born in India in 1903. He entered the world as Eric Arthur Blair, but later adopted and wrote under the pseudonym of Orwell. Having experienced the life of a destitute bohemian, as a prep school teacher, as an imperial British policeman in Burma, and as a soldier on the side of the anarchists in the Spanish Civil War, Orwell saw the world through very bitter but brilliant eyes. Part of a republic of English letters that included T.S. Eliot, Evelyn Waugh, Owen Barfield, and Herbert Read, Orwell wrote extensively on a number of topics vital to his day. In particular, with men such as Christopher Dawson and, a bit later, Russell Kirk, Orwell feared the corruption of language, the employment of propaganda, and the consequent loss of imagination.1

Despite his blistering attacks on all forms of socialism in his fiction, many scholars have considered Orwell a socialist. Yet, as Kirk rightly argued, his leftism is merely “by accident,” a reaction against the “commercialism and crassness” of the Western world of his day.2 If a socialist, his socialism was the craft, genteel, and communal socialism of nineteenth-century gentlemen-idealists such as William Morris. In his preface to the Ukrainian edition of Animal Farm, he explained: “I became pro-Socialist more out of disgust with the way the poorer section of the industrial workers were oppressed and neglected than out of any theoretical admiration for a planned society.”3 In a study of both Russell Kirk and George Orwell, John Rodden concluded that the two men had so much in common, as each “was an intellectual outsider who scrutinized his own side just as vigorously as he attacked his ideological foes.”4

During his tragically short life, before tuberculosis claimed him, Orwell contributed two of the best novels written in the twentieth-century, each a dystopia. As a young man, he had absorbed Huxley’s Brave New World as well as a Russian dissident dystopian novel, We, by E.I. Zamytain. Each, he argued, considered the rise of the machine in human society, anything that conformed man and made him less than God or nature intended him, individually as well as collective, to be. “It is in effect a study of the Machine, the genie that man has thoughtlessly let out of its bottle and cannot put back again,” he wrote about We.5 This was a common critique of almost all non-Leftists of the twentieth century, all of whom feared the rise of leviathan, Mars, corporations, bureaucracy, monolithic and nationalist educational systems, and any and every thing that attempted to homogenize man.

Orwell’s first great novel, Animal Farm, appeared in 1946, a little less than a decade after he barely escaped the murderous rampages of the Stalinists in Spain. Many of his closest allies there died by execution or simply disappeared in a makeshift Spanish gulag. Upon returning to Britain, disgust welled up in Orwell as he attempted to explain the manipulative nature of the Soviets and their propaganda. “We found numerous sensible and well-informed observers believing the most fantastic accounts of conspiracy, treachery, and sabotage which the press reported from the Moscow trial,” he lamented. Pondering the vast waste of life and the politicization of all life in 1937 Spain, he responded by writing a fairy tale filled with pigs, horses, and sheep. As he explained in his preface to the Ukrainian edition, Animal Farm’s plot points almost all come, though not in chronological order, from the actual events of the Soviet revolution. Through the work, he admitted, he hoped to reclaim a humane socialism divorced from the forces of Russian propaganda.

Though a satire along the lines of Swift’s Gulliver’s Travels, Animal Farm’s humor remains exceedingly dark. Anyone expecting the fairy tale, as Orwell called it, to look something like The Wind in the Willows will get a real shock. Throughout the short but quickly-moving story, Orwell demonstrates how rapidly the desire for power trumps humane and humanitarian impulses. Those who want to rule will say anything and betray anyone to gain control of society. Their slogans, though powerful propaganda, reveal themselves as shallow marketing ploys, though quite effective. Most importantly and famously, the animals post a sign that “All Animals are Equal.” This descends easily into “All Animals are Equal But Some Animals are More Equal Than Others.”6 The story, not atypically, ends with the new bosses not only being no different from the original ones overthrown, but with such a conjunction of the two that one can barely distinguish the old from the new. “We’ve voices were shouting in anger, and they were all alike. No question, now, what had happened to the faces of the pigs. The creatures outside looked from pig to man, and from man to pig, and from pig to man again; but already it was impossible to say which was which.”7

Though beautifully written and accessible to the young and the old, Animal Farm only revealed a bit of Orwell’s talent. He demonstrated his fullest literary skill with the writing and publication of what would be his final novel, Nineteen Eighty-Four. Nineteen Eighty-Four is as brilliant in style as it is dark in theme. Claustrophobic beyond compare, Nineteen Eighty-Four presented the first truly gritty novel of the genre of dystopian literature. The economy limps, at best, and the standard of living plummets. Indeed, decay permeates all of society, unlike that of Huxley’s Brave New World, itself a consumerist paradise.

He meditated resentfully on the physical texture of life. Had it always been like this? Had food always tasted like this? He looked round the canteen. A low-ceilinged, crowded room, its walls grimy from the contact of innumerable bodies; battered metal tables and chairs, placed so close together that you sat with elbows touching; bent spoons, dented trays, coarse white mugs; all surfaces greasy, grime in every crack; and a sourish, composite smell of bad gin and bad coffee and metallic stew and dirty clothes. Always in your stomach and in your skin there was a sort of protest, a feeling that you had been cheated of something that you had a right to. It was true that he had no memories of anything greatly different. In any time that he could accurately remember, there had never been quite enough to eat, one had never had socks or underclothes that were not full of holes, furniture had always been battered and rickety, rooms underheated, tube trains crowded, houses falling to pieces, bread dark-coloured, tea a rarity, coffee filthy-tasting, cigarettes insufficient— nothing cheap and plentiful except synthetic gin. And though, of course, it grew worse as one’s body aged, was it not a sign that this was not the natural order of things, if one’s heart sickened at the discomfort and dirt and scarcity, the interminable winters, the stickiness of one’s socks, the lifts that never worked, the cold water, the gritty soap, the cigarettes that came to pieces, the food with its strange evil tastes? Why should one feel it to be intolerable unless one had some kind of ancestral memory that things had once been different?8

Only adding to the misery, war rages. Three powers, none of which can defeat the other two, exchange deaths, knowing that there is no end of conflict in sight. This is not the total war of World War II, but the constant limited war of border skirmishes, marginal and impermanent changes and alterations in borders and frontiers. More than anything else, the constant war allows each power to maintain a constant state of excitement and paranoia. As the disillusioned American liberal Randolph Bourne observed during the 1910s, war is, indeed, the health of the state. “The enemy of the moment always represented absolute evil, and it followed that any past or future agreement with him was impossible,” Orwell explains.9 Big Brother, the name given to the state, encourages sheer and unadulterated hatred where the enemy is concerned.