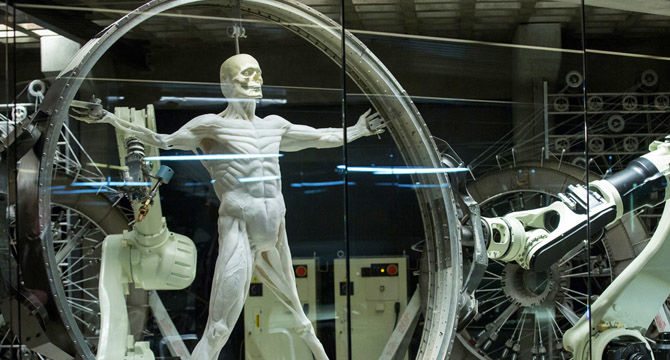 Technocrats in the robotics field are in a furious race to create robotic man, and skin plays an integral part. Heat-seeking skin will be able to detect nearby humans. ⁃ TN Editor

A heat-sensing film could let robots detect when humans are around, like pit vipers hunting out warm-blooded prey.

The flexible, transparent coating is made of pectin, a low-cost plant material used to set jam. Unlike conventional electronics, it relies on currents of ions rather than electrons to detect temperature variations – just like natural membranes used by the snakes.

The film can sense temperature changes as small as 10 millikelvin, which is twice as sensitive as human skin. It can detect a warm body the size of a rabbit from a metre away, something the researchers tested by microwaving a teddy bear and setting it at different distances from the film. Changes in temperature cause the film’s resistance to vary, which is picked up by electrodes along the edges and transmitted to a computer.

Applying it over a robot’s entire body could provide 360° thermal sensing, says Raffaele Di Giacomo at ETH Zurich in Switzerland, who led the research. That could help machines navigate crowded areas without hitting people, or help search and rescue robots locate humans in rubble or smoke-filled rooms. It could also help them to avoid damage and be more helpful to people. A robot assistant might need to know if a cup of tea is too hot to hand over, for example.

For Di Giacomo, helping robots learn about their environment is key. “The most important thing about combining AI and humanoid robots is that this AI needs to be shaped by its senses like we are,” he says. “You need to provide full sensory feedback so the AI can build up a picture of the world.”

The temperature-sensitive film could also be used in prostheses to help give the wearer sensory feedback.

Unlike previous flexible heat sensors, the membrane is sensitive across a broad temperature range and is very simple to make. The researchers cast pectin in a mould and then dipped it in calcium chloride, as the calcium ions make the pectin sensitive to heat changes. The signals from the electrodes along the film’s edges can pinpoint heat sources, and the team is now developing algorithms to map temperature across complex surfaces like body parts.