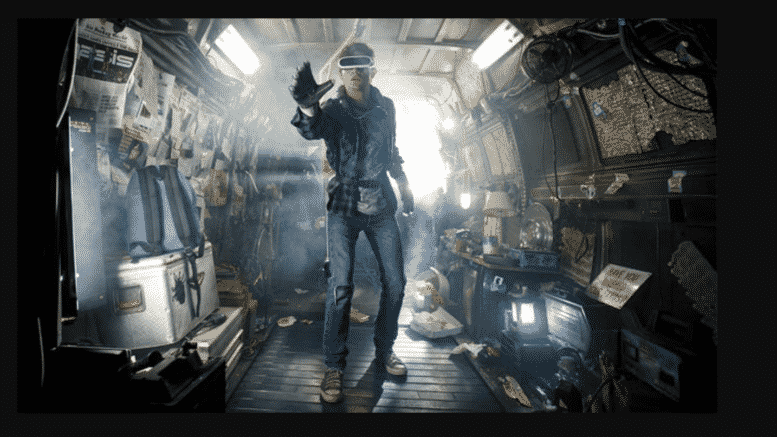 Screenshot from Ready Player One movie

Please Share This Story!
PDF 📄
Mark Zuckerberg is betting Facebook’s future on the Metaverse. Venture capitalists and Big Tech companies are pouring hundreds of millions into its development. It’s being called the successor to the Internet as we know it today, and it could be where most future humans spend their entire life. Read this article to get started in your understanding of what it means. ⁃ TN Editor

The word ‘metaverse’ is becoming almost inescapable, especially for those who peruse technology and games-related headlines.

Most recently, Facebook has been making big noises about transitioning from a social media company to a metaverse one. Meanwhile other companies have raised significant capital — such as Epic Games securing $1 billion — towards similar ambitions (Epic even stated in court earlier this year that Fortnite is not a game, it’s a metaverse).

Jon Radoff, CEO of Beamable and formerly mobile developer Disruptor Beam, has attempted to map out the companies that have either expressed an interest in the metaverse, or at least could be argued are connected to it, which is extensive to say the least.

With the term already in danger of overuse after these opening paragraphs alone, it’s time to question why so many major companies across multiple industries are investing so heavily in a concept some might write off as science fiction.

Indie developer Rami Ismail sums it up to us rather nicely: “The idea of creating an alternative world in which everyone has to use your currency, play by your rules and everyone wants to promote their brands is really appealing to rich people. I mean, I guess we are talking about Fortnite after all.”

But this feature would be too short if we just accepted the “Because money” rationale behind the rise of the metaverse. So let’s take a deeper dive into what it is these companies are actually trying to achieve, and why games developers see themselves at the forefront of these efforts.

Novaquark, the developer behind user-generated MMO Dual Universe, is so dedicated to the concept that it even refers to itself as a metaverse company. General manager Sébastien Bisch describes the metaverse in much the same way most people envisage it: a single, persistent virtual environment shared by everyone on the planet. The go-to pop culture references are The Matrix or Ready Player One’s Oasis if you want a shorthand for what that might look like.

Earlier this year, US-based HiDef raised $9 million for its own metaverse project. Founder and chief creative officer Jace Hall paints a picture of the metaverse of something virtual that interacts with reality, rather than replaces it — a platform that eliminates the distinction between online and offline.

“For example, whether you spent time working a McDonald’s in-game at a virtual mall or McDonald’s down the street from your house becomes irrelevant, because the money/value you earned is exactly the same. Literally the exact same currency,” he says. “Spend it offline. Spend it online. Order a pizza online, it is delivered offline. Order a pizza offline, get it delivered online.

“Reality is the metaverse, the metaverse is reality. Same thing. It’s just what location do you want to spend your time in and at what moment? Consequences of action both online/offline are similar if not identical (beyond physical). Everything interfaces with everything.”

Herman Narula, CEO of tech firm Improbable, maintains the metaverse is a more “nebulous concept,” instead suggesting it has become a term for more sophisticated virtual worlds that connect a much higher number of people.

“A highly connected environment with lots of interactive players and complex simulation creating rich experiences, something more than a game but less than the real world,” he says. “The metaverse is to virtual worlds as a website is to the internet.”

He admits the analogy breaks down because not all concepts can flow easily between different virtual worlds. The example he gives is whether a player in a Harry Potter virtual world would want to encounter Master Chief. He instead suggests that, unlike the singular internet we have, there would be many metaverses for people to choose from.

But we already have multiple virtual worlds. Every MMORPG, battle royale, shared world shooter, or creation game like Minecraft and Roblox can allow people to explore a digital environment together, so what elevates the metaverse above what currently exists?

Bisch observes that video games mostly offer a limited type of virtual experience, one focused around set mechanics such as shooting or driving. He adds that even the biggest video games with the largest audiences don’t truly connect those players together in a unified experience — it spreads them out across servers.

“Take the concerts that happen in Fortnite,” he says. “Yes, these were the same for everyone, but two friends who attended them on different servers were technically not able to share them at the same time, in the same virtual place.

“Very few games have tried to propose a unified, persistent game world for all players, and when they did, the scalability was extremely limited with a cap to the number of players able to play in the same area.”

So far, there seems to be a lack of consensus on what the metaverse could actually be, but investors seem to agree there’s big money in it. Narula likens it to the formative stages of the internet, and the initial reactions of the dot-com boom investors and first consumer evangelists.

Let’s hope people have learned never to get involved in anything that Zuckerberg or his buddies are involved with. Leaving Facebook and Twitter was the best thing I have ever done. We need to start divorcing ourselves from technology and hoping they implode. They have taken a good thing and destroyed it. We lived many years, very happily I might add, without all of this garbage in our lives. It is time to get back to a simpler way of living. This metaverse idea is perverted.

Well said. I hope all their tall towers come crushing down one day on top of their buildings. It would be great to see. Better than any of their wicked games.

Patrick, I have read your book Hard Road to Technocracy. It is a fascinating history. I didn’t know the technocrats tried to seize power of the government of USA glad it was thrown out. Do you think that could happen again? I mean thrown out for another 50 years or more. Must take a look see what else you have written My nice Yoli is advertising games in the video. She is the blonde girl. Not sure will the link work;

If you want to understand Mark Zuckerberg, just look at what he created: Facebook, which, “on its face” was one of the stupidest ideas ever, and a poor imitation of My Space. But, hmm, somehow it succeeded anyway. How could that be? Oh, because it appeared at about the same time DARPA decided not to deploy a surveillance program to collect information on Americans. I mean, that would be kind of illegal, right? So they used little Mark — a certifiable dimwit who didn’t even deserve to go to a no name university, much less Harvard — as their front… Read more »

Mmmmm…….NO THANKS! As bad as it is…..I prefer the REAL WORLD!

Since we can’t trust certain folks in the natural or the spiritual world to be truthful or honest about anything. I can’t imagine why certain factions would expect anyone watching to trust them in a virtual world. What’s next? Will it be mandatory for you to participate in a virtual world in order to be allowed to function and exist in the natural world? Probably so. Most of the sci-fi sounding stuff I hear about these days will be nothing but an additional source of enslavement that will destroy the gullible. It always boils down to more power, control and… Read more »

Gates et al. want full control of ALL the food; Covidystopian madness throughout Australia and the USA; what those “vaccines” are really doing; people bravely fighting back all over; and more from SAMIZDAT – NEWS FROM UNDERGROUND