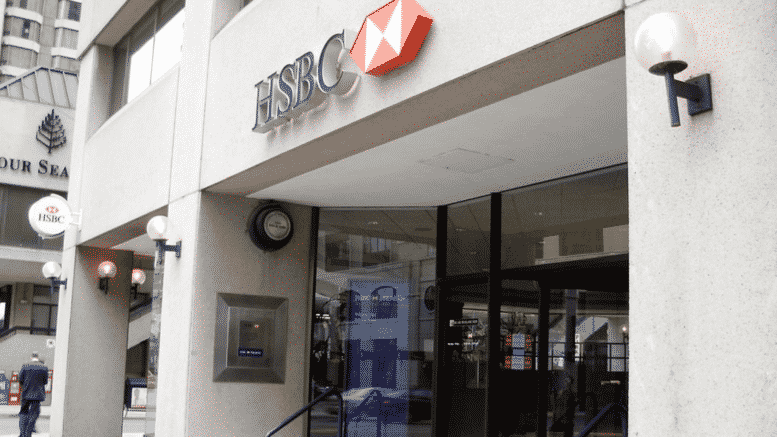 Please Share This Story!
PDF 📄
Mask madness has infected global banks as HSBC has threatened to cut off bank accounts for anyone who refuses to wear a mask. This is blatant punishment that can cause catastrophic damage and financial loss to those afflicted. The UK is in a tailspin comparable to Alice in Wonderland, except it is Debby in Dystopia. ⁃ TN Editor

HSBC has said it will “reserve the right” to cancel the accounts of customers who refuse to wear masks inside its UK branches.

The British-based bank — the Hong Kong & Shanghai Banking Corporation (HSBC) founded in 1865 — said that masks are mandatory in all branches unless visitors have a medical exemption.

A spokesman for HSBC told The Mirror on Tuesday that it advises its customers: “If you do visit us, please wear a face covering and maintain a safe distance from others. If individuals put themselves or our colleagues at risk, without a medical exemption, we reserve the right to withdraw their account.”

In December, the British multinational froze the account of a church in Hong Kong that backed the pro-democracy movement. That same month, HSBC also froze the accounts of exiled Hong Kong lawmaker Ted Hui, his wife, and his parents, reportedly under the orders of Chinese Communist Party-controlled police.

Britain’s Foreign Secretary Dominic Raab criticised HSBC in July for its support of the CCP-backed security laws which resulted in the crackdown on the pro-democracy movement in Hong Kong.

This week has also seen almost all major British supermarkets, Tesco, Asda, Waitrose, Aldi, Sainsbury’s, and Morrisons, saying they will refuse entry to customers not wearing a mask, unless they have a medical exemption. Supermarkets like Tesco are also demanding shoppers shop alone, and several have said they have hired extra security to enforce the measures.

“Should a customer refuse to wear a covering without a valid medical reason and be in any way challenging to our colleagues about doing so, our security colleagues will refuse their entry,” an Asda spokesman said.

Reports revealed this week that German banking giant Deutsche Bank has decided cut ties with President Donald Trump, while New York lender Signature Bank has said that it will be closing down two of the Republican leader’s personal accounts.

Well what about Fouci’s 2008 study published in the Journal of Contagious Diseases in which he and two other scholars, examined autopsies from 1918 and discovered that it was not the Spanish Flu which killed the most people. Indeed, it was bacterial pneumonia that killed the most people and the Spanish Flu was used to scare us about Covid. Many physicians are warning about the rising number of Bacterial Pneumonia Cases which they believe is connected to mask wearing Yes, mask wearing was something that people were shamed into wearing back in 1918. See the pictures.