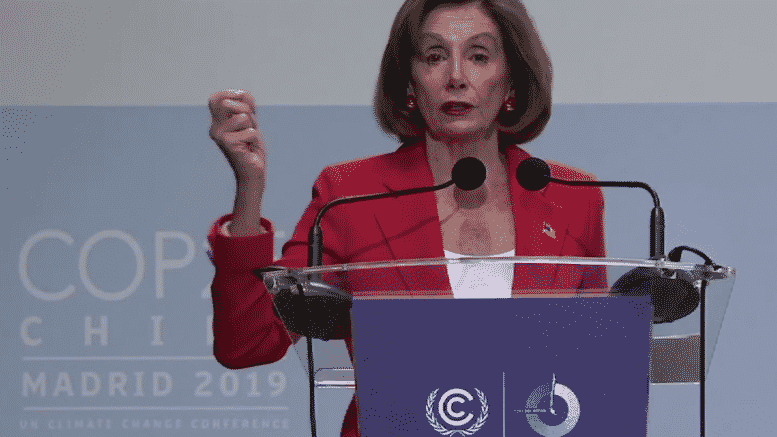 YouTube. Nancy Pelosi says the US is still 'in'.

Please Share This Story!
PDF 📄
The UN and global elite live in their own self-created fantasy world while making rules and regulations on how the rest of the world should live and behave. Do they live that way? Absolutely not: it’s only for you!

COP25 was originally set to be held in Chile, but that was before leftists decided to tear the country apart in protest against their government. ⁃ TN Editor

I’m in Madrid for the latest UN Climate Conference – COP25 – and literally no one cares.

When I say that literally no one cares I mean none of the real, normal people — whether natives or tourists — just wanting to go about their daily lives in this handsome capital city, have a few glasses of vino with their tapas, check out the Prado, make ends meet, look at the Christmas lights, not even think about global warming because hey it’s December and its chilly even in Spain.

What I definitely don’t mean is the 30,000 or so loons who have flown in for the freak show about a thirty buck cab away in an industrial exposition zone on the edge of town. Clearly they care a lot but they’re not normal and they have no connection with the real world other than the unfortunate fact that they currently seem to make all our rules.

That’s what’s really scary about these COP climate conferences, which perfectly encapsulate the increasing gulf between the globalist elite rulemakers and the ordinary people — you and me — who have to suffer from their stupid, anti-democratic decisions. The liberal elite in their hermetically sealed conference zone; the underclass — which is everyone else — in the city.

They arrived by plane – even private jet – but they tell us we should no longer fly unless it’s really necessary.

They’re ferried around in fleets of black limousines but cars, as they keep telling us, are unsustainable.

This is the “do as I say, not do as I do” class. And if you want to an idea of how utterly useless and contemptible they are, here’s an excerpt from the speech Nancy Pelosi gave to the delegates when she flew in to pretend that the Democrats are running the U.S. and that their presence at a UN Climate Conference therefore matters:

Her speech, which you can see on Reuters TV, if you have the stomach for it, included these immortal lines:

‘This is a mission, this is a passion, this is a scientifically based approach to all of it in – *clears throat* – and we’re here to say to all of you on behalf of the House of Representatives in the Congress of of the US we’re still in it.’

We are jeopardising life itself, no less. [FACT CHECK. The number of people in the real world who have so far died of ‘climate change’ is, no, wait for it…zero. Extreme weather events kill people but not the natural ebb and flow of climate and there is no evidence that these extreme weather events are increasing in our era]

Problem is, they say this every UN conference. It’s always the last chance to save the world. We’re always on the very edge of the tipping point. None of these people, clearly, has ever heard of the story of Chicken Little (or Chicken Licken as we call him in England).

But the global climate elite aren’t merely useless, they are also deeply ignorant. As exhibit A, I present an interview from a month back in which would-be presidential candidate and tireless environmental campaigner Mike Bloomberg is quizzed about one of the key awkward facts about climate change: that no matter how much the West chooses to cut its carbon dioxide emissions, China (and others, but most especially China) is going full speed ahead with its industrial development. As I reported a week ago in a piece titled ‘Greta Who?’ China now has as many new coal fired power plants in development as the ENTIRE capacity of the European Union.

So here is Mike Bloomberg addressing this key issue.

Remember, this is the same Mike Bloomberg who is spending part of his $500 million campaign budget promising to eradicate the U.S. coal industry; whose $50 billion fortune and media empire he deploys tirelessly to tell us how series the climate emergency is and how important it is that we should act.

But not if you’re China, apparently. China, in Bloomberg’s view — and he’s not unrepresentative of the liberal elite — is an exception because Xi Jinping (who is not a dictator, by the way) is just trying to keep his economy going. Oh, and though he’s building lots more coal-fired power stations he’s trying to build them away from the cities.

Mike, love: whether you build a coal-fired power station in the middle of the Gobi desert or the middle of Beijing, the CO2 emissions are EXACTLY the same. Bloomberg hasn’t thought this through because for him, as for the global elite generally, climate change is just a mantra used to advance financial and socio-political interests. Who cares if Bloomberg doesn’t know the difference between carbon-dioxide (the plant food which is greening the planet) and actual pollution? Nor does almost anyone in the global elite.

She is working for the Pope.