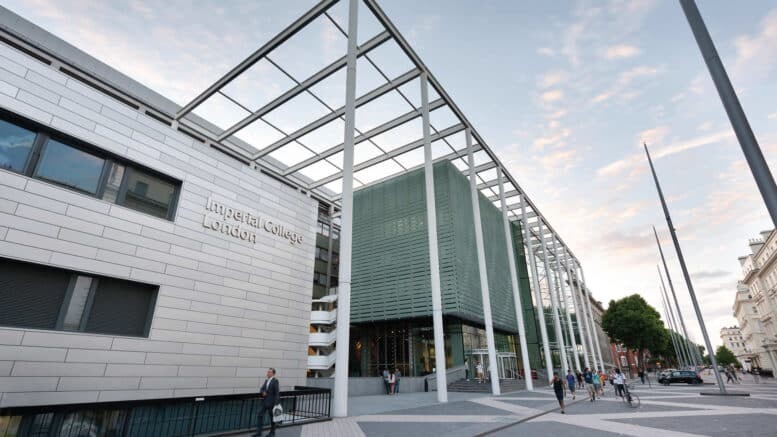 Please Share This Story!
PDF 📄
The world has apparently been ‘punked’ by Imperial College London into a global panic over the coronavirus. Imperial has long been associated with global warming studies using disputed data that have promoted climate alarmism.

Now that we see who jump-started the panic, we can better understand the agenda, the strategy and the outcome. It was never about protecting people’s lives but rather about shutting down the world’s economic system that is seen as the primary agent of global warming.

Also see: Behind the Virus Report That Jarred the U.S. and the U.K. to Action ⁃ TN Editor

The entire political focus of yesterday’s news cycle was the legislative imbroglio between Republicans and Democrats over the coronavirus rescue package. Republicans believe we should presuppose and even continue encouraging an indefinite shutdown while spending trillions to treat it. Democrats believe the same thing and also want to add all their other extraneous progressive policies too. But nobody is asking: Do we really need to intensify the shutdown before we understand the data and projections of the actual virus itself?

Given that the virus was discovered in Wuhan on November 17 (at the latest), when did coronavirus really begin in this country? Roughly how many cases do we think occurred before we began testing during the first week in March, and how many fatalities occurred? How many of the presumed flu deaths, and particularly the presumed pneumonia deaths during what was thought of as a bad flu season, were really due to coronavirus?

These are not mere academic questions. They should determine our public policy response. Knowing when the virus began and what we think occurred in January and February (and perhaps even December) will help determine not only how severe this virus is, but how far along we are into the epidemic. If we really had hundreds of thousands, if not millions, of cases, along with several thousand more fatalities prior to testing, that would mean that the mortality rate is even lower than the 1.2% post-testing average so far. It would also mean we are farther along in the epidemic and that many have already been exposed to it, thereby making a categorical and nationwide lockdown counterintuitive at this point.

What led our government and the governments of many other countries into panic was a single Imperial College of U.K. study, funded by global warming activists, that predicted 2.2 million deaths if we didn’t lock down the country. In addition, the reported 8-9% death rate in Italy scared us into thinking there was some other mutation of this virus that they got, which might have come here. Together with the fact that we were finally testing and had the ability to actually report new cases, we thought we were headed for a death spiral. But again, as my colleague Steve Deace pointed out, we can’t flatten a curve if we don’t know when the curve started.

Take this chart from Johns Hopkins University School of Medicine, for example. 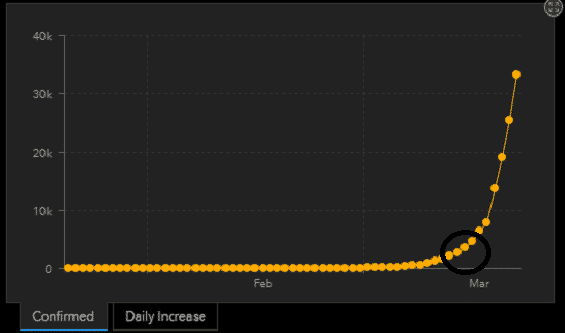 You see an insanely dangerous trajectory of cases taking off in March. But what exactly happened in March? The virus was introduced in Wuhan in November. And even without testing, we did detect a handful of cases here, the first known case being on January 21. So why would we suddenly experience the outbreak in March? It’s quite evident that the culprit for the spike in the chart is simply because that is when the testing began because Trump dropped the FDA regulation barring private testing after the government testing didn’t work.

Thus, we know with certainty that people were clearly contracting coronavirus and were likely dying some time before March, but we’re still not sure how long before or how many people. Given the overlap with the general flu and pneumonia season, we really have no way of knowing that the January 21 case of the individual flying from Wuhan to Spokane, Washington, was the first active case – patient zero.

It’s truly inconceivable that it would take so long for the virus to come here after it broke out in China in November. We likely had hundreds of thousands of travelers coming here and countless tens of thousands of Chinese nationals flying back even before Customs and Border Protection introduced any health care screening per CDC guidance on January 17. There are roughly 3.4 million Chinese admissions every year, not counting the numerous Americans who fly there and back. If we divide that by six to account for a two-month period before Trump shut off travel but after the virus had developed in Wuhan, that would be nearly 600,000 Chinese nationals.

It’s safe to say that as January wore on, the numbers likely dropped a lot from the Chinese side, but it’s still a statistical improbability that the virus wasn’t brought in earlier and in greater numbers than CDC has thus far detected and documented. Moreover, Chinese students in particular, including those from Wuhan, traveled back in mid-January for the new semester.

As Dr. Deborah Birx, the coordinator of Trump’s coronavirus response task force, said yesterday of the spread in New York City, “Clearly the virus had to have been circulating for a number of weeks in order to have this level of penetrance in the community.”

Been saying…like so many of you who get it. The panic around C-19 is just not right. My contacts overseas are beginning to think and say the same, “Something here is not right.” It’s becoming obvious that C-19 was a tactical move–the last move on the global chessboard for the ‘Black Hand that stirs the pot’. Manufactured panic? Yes, and by whom?–the usual suspects and their propaganda toadies, the Imperial College. I commented during the Greta T. stage that she and those like her were a last ditch effort to make the public submit to the will of the self-appointed… Read more »