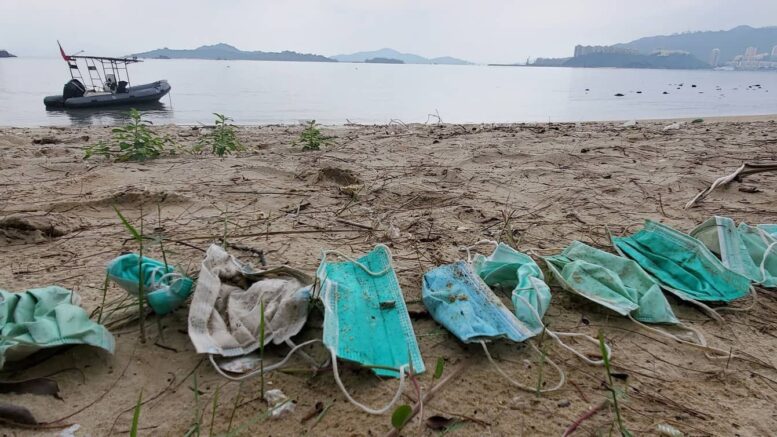 Please Share This Story!
PDF 📄
Technocrat social engineers viewed face masks as a necessary tool to create a submissive population, but gave no regard for the other negative sided effects like collateral damage to both humans and to the environment. The world is using almost 130 billion disposable masks per month! ⁃ TN Editor

The planet may be facing a new plastic crisis, similar to the one brought on by bottled water, but this time involving discarded face masks. “Mass masking” continues to be recommended by most public health groups during the COVID-19 pandemic, despite research showing masks do not significantly reduce the incidence of infection.1

As a result, it’s estimated that 129 billion face masks are used worldwide each month, which works out to about 3 million masks a minute. Most of these are the disposable variety, made from plastic microfibers.2

Ranging in size from five millimeters (mm) to microscopic lengths, microplastics, which include microfibers, are being ingested by fish, plankton and other marine life, as well as the creatures on land that consume them (including humans3).

More than 300 million tons of plastic are produced globally annually — and that was before mask-wearing became a daily habit. Most of it ends up as waste in the environment, leading researchers from the University of Southern Denmark and Princeton University to warn that masks could quickly become “the next plastic problem.”4

Why Disposable Masks May Be Even Worse Than Plastic Bottles

The bottled water crisis is now well-known as a leading source of environmental plastic pollution, but it’s slated to be outpaced by a new mask crisis. While about 25% of plastic bottles are recycled, “there is no official guidance on mask recycle, making it more likely to be disposed of as solid waste,” the researchers stated. “With increasing reports on inappropriate disposal of masks, it is urgent to recognize this potential environmental threat.”5

Not only are masks not being recycled, but their materials make them likely to persist and accumulate in the environment. Most disposable face masks contain three layers — a polyester outer layer, a polypropylene or polystyrene middle layer and an inner layer made of absorbent material such as cotton.

Polypropylene is already one of the most problematic plastics, as it’s widely produced and responsible for large waste accumulation in the environment, as well as being a known asthma trigger.6 Further, the researchers noted:7

“Once in the environment, the mask is subjected to solar radiation and heat, but the degradation of polypropylene is retarded due to its high hydrophobicity, high molecular weight, lacking an active functional group, and continuous chain of repetitive methylene units. These recalcitrant properties lead to the persistence and accumulation in the environment.”

They also stated that when the masks become weathered in the environment, they can generate a large number of microsized polypropylene particles in a matter of weeks, then break down further into nanoplastics that are less than 1 mm in size.

Because masks may be directly made from microsized plastic fibers with a thickness of 1 mm to 10 mm, they may release microsized particles into the environment more readily — and faster — than larger plastic items, like plastic bags.

Further, “Such impacts can be worsened by a new-generation mask, nanomasks, which directly use nanosized plastic fibers (e.g., diameter <1 mm) and add a new source of nanoplastic pollution.”8 A report by OceansAsia further estimated that 1.56 billion face masks may have entered the world’s oceans in 2020, based on a global production estimate of 52 billion masks manufactured that year, and a loss rate of 3%, which is conservative.

Based on this data, and an average weight of 3 to 4 grams for a single-use polypropylene surgical mask, the masks would add 4,680 to 6,240 additional metric tons of plastic pollution to the marine environment, which, they note, “will take as long as 450 years to break down, slowly turning into microplastics while negatively impacting marine wildlife and ecosystems.”9

Plastic particles are known to travel great distances, posing immense risks to virtually every part of the globe. Small, weathered pieces of plastic — suggesting they’d been on a long journey — have been found at the top of the Pyrénées mountains in southern France10 and “in the northernmost and easternmost areas of the Greenland and Barents seas.”11

Calling the Greenland and Barents seas area a “dead end” for the plastic debris, researchers hypothesized that the seafloor below would be a catch-all for accumulating plastic debris.12 In separate research, it was also revealed that plastic pollution has reached the Southern Ocean surrounding Antarctica — an area believed to be mostly free of contamination.13 According to the featured study:14

“When not properly collected and managed, masks can be transported from land into freshwater and marine environments by surface run-off, river flows, oceanic currents, wind, and animals (via entanglement or ingestion). The occurrence of waste masks has been increasingly reported in different environments and social media have shared of wildlife tangled in elastic straps of masks.”

Such plastics also contain contaminants, such as polycyclic hydrocarbons (PAHs), which may be genotoxic (i.e., causing DNA damage that could lead to cancer), along with dyes, plasticizers and other additives linked to additional toxic effects, including reproductive toxicity, carcinogenicity and mutagenicity.15

Aside from the chemical toxicity, ingestion of microplastics from degraded masks and other plastic waste is also toxic due to the particles themselves as well as the potential that they could carry pathogenic microorganisms.

Another issue that’s rarely talked about is the fact that when you wear a mask, tiny microfibers are released, which can cause health problems when inhaled. The risk is increased when masks are reused. This hazard was highlighted in a performance study to be published in the June 2021 issue of Journal of Hazardous Materials.16

Researchers from Xi’an Jiaotong University also said scientists, manufacturers and regulators need to assess the inhalation of microplastic and nanoplastic debris shed from masks — both disposable and cloth — noting:17

“… [C]omplaints of throat irritation or discomfort in the respiratory tract by children, the elderly, or other sensitive individuals after wearing these may be alerting signs of excessive amounts of respirable debris inhaled from self-made masks and respirators.”

In the featured study researchers also called on the environmental research community to “move fast to understand and mitigate these risks,” suggesting that reusable cloth masks be promoted in lieu of disposable options and that mask-only trash cans be set up to assist in proper disposal.18 However, another option would be to loosen or eliminate mask mandates, which may turn out to cause more harm than good.

Mask Use May Pose a Risk for Advanced Stage Lung Cancer

While it’s well-known that gut microbiota affect your immune system and risk of chronic diseases, it was long thought that lungs were sterile. Now it’s known that microbes from your mouth, known as oral commensals, frequently enter your lungs.19 Not only that, but researchers from New York University (NYU) Grossman School of Medicine revealed that when these oral commensals are “enriched” in the lungs, it’s associated with cancer.20

While the study didn’t look into how mask usage could affect oral commensals in your lungs, they did note, “The lower airway microbiota, whether in health or disease state, are mostly affected by aspiration of oral secretions, and the lower airway microbial products are in constant interaction with the host immune system.”21

It seems highly likely that wearing a mask would accelerate the accumulation of oral microbes in your lungs, thereby raising the question of whether mask usage could be linked to advanced stage lung cancer. The National Institutes of Health even conducted a study22 that confirmed when you wear a mask most of the water vapor you would normally exhale remains in the mask, becomes condensed and is re-inhaled.23

They went so far as to suggest that wearing a moist mask and inhaling the humid air of your own breath was a good thing, because it would hydrate your respiratory tract. But given the finding that inhaling the microbes from your mouth may increase advanced cancer risk, this hardly sounds like a benefit.

Not to mention, the humidity inside the mask will allow pathogenic bacteria to rapidly grow and multiply and, since the mask makes it more difficult to breathe, you’re likely to breathe heavier, thereby risking inhaling the microbes even deeper inside your lungs.

Masks Are Harming Children and Adults

The “new normal” of widespread masking is affecting not only the environment but also the mental and physical health of humans, including children. It’s largely assumed that face masks are “safe” for children to wear for long periods, such as during school, but no risk assessment has been carried out.24 Further, as evidenced by Germany’s first registry recording the experience children are having wearing masks.25

Using data on 25,930 children, 24 health issues were reported that were associated with wearing masks that fell into the categories of physical, psychological and behavioral issues.26 They recorded symptoms that:27

They also found 29.7% reported feeling short of breath, 26.4% being dizzy and 17.9% were unwilling to move or play.28 Hundreds more experienced “accelerated respiration, tightness in chest, weakness and short-term impairment of consciousness.”

It’s also known that microplastics exist in human placentas,29 and animal studies show that inhaled plastic particles pass through the placenta and into the heart and brains of fetuses.30 The fetuses exposed to the microplastics also gained less weight in the later part of the pregnancy.31

“We found the plastic nanoparticles everywhere we looked — in the maternal tissues, in the placenta and in the fetal tissues. We found them in the fetal heart, brain, lungs, liver and kidney,” lead research Phoebe Stapleton of Rutgers University told The Guardian.32

Dr. Jim Meehan, an ophthalmologist and preventive medicine specialist who has performed more than 10,000 surgical procedures and is also a former editor of the medical journal Ocular Immunology and Inflammation, also conducted an evidence-based scientific analysis on masks, which shows that not only should healthy people not be wearing masks but they could be harmed as a result.33

Meehan suggests that the notion of mask-wearing defies common sense and reason, considering that most of the population is at very low or almost no risk of becoming severely ill from COVID-19. He also compiled 17 ways that masks can cause harm:34