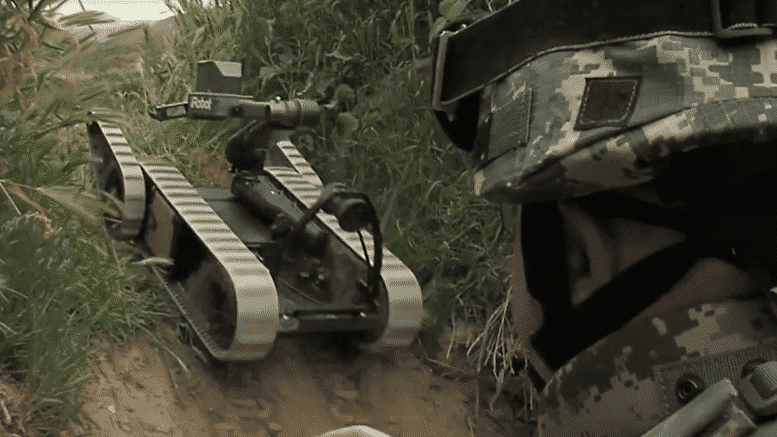 TN Note: A must-read article. The first killer robot in American history was detonated to terminate the active killer who killed 5 policemen at the Black Live’s Matter rally in Dallas. Pandora’s box has been opened and will never be shut.

Robot-maker Sean Bielat says he’s fine with the Dallas Police Department’s apparently unprecedented use of a bomb-disposal robot to kill a gunman on Thursday. “A robot was used to keep people out of harm’s way in an extreme situation,” said Bielat, the CEO of Endeavor Robotics, a spinoff of iRobot’s military division. “That’s how robots are intended to be used.”

Joergen Pedersen, the CEO of RE2 robotics and the chairman of the National Defense Industrial Association’s robotics division concurred. “If these robots are used in manners for which they were unintended, we would expect that the officers who are there to keep citizens and themselves safe would use good judgment where the application of lethal force is a last resort,” he said.

On Sunday, speaking to Face the Nation, Dallas Mayor Mike Rawlings blessed the operation. “The chief had two options and he went with this one. I supported him completely because it was the safest way to approach it,” he said.

But some ethicists are worried.

“My initial reaction was that we have just got onto the slippery slope,” said Heather Roff, a senior research fellow at Oxford and a research scientist at Arizona State University’s Global Security Initiative. “This is going to be very hard to put back and that the militarization of police capabilities means that they may now feel that it is reasonable to use robotics in this way to ensure compliance…If one doesn’t have to talk to a subject and can demand compliance, then this may mean more forceful or coercive demands are made.”

Bielat believes that incidents like the one in Dallas, in which police used a Northrop Grumman Remotec Andros F5 to carry explosives close enough to a gunman to kill him, won’t become “a common occurrence,” in part because the Andros F5, like his company’s own celebrated PackBot, cost upwards of $100,000 apiece. But he also believes that military-grade robots are on the cusp of getting a lot cheaper and more capable, due to decreases in the cost of processing power, advances in 3D printing, and other factors.

“A lot of the components have come down in price because of consumer applications,” he said. “You now have more capability in the camera on a cellphone than you did on the…camera on the PackBot when it was first built.”

That’s leading to programs like the Army’s Common Robotic System Individual, or CRS (I), which aims to supply its infantry units with 4,100 sub-25-pound robots. Bielat anticipates that the Marine Corps will also sign onto the program, and perhaps more military groups as well. Many users will want to modify the robots to handle their own set of tasks — that could include lethal ones.

“As you see robots move out of the EOD [bomb disposal] community and into the infantry, you’re going to have people saying, ‘Hey, these things are really useful. What would make them even more useful is x, y, and z, and that probably includes some level of armament.”