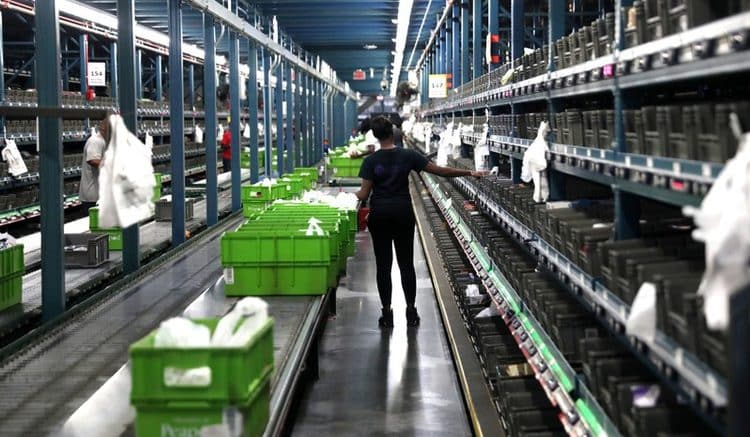 The entire trillion dollar grocery industry is transforming before your eyes as Amazon sparks a robot war with other grocery store enterprises. Stores will be largely free of cashiers, pickers and stockers, putting millions of people out of work. Technocrats invent because they can not because there is a good reason to do so. ⁃ TN Editor

Grocery group Ahold Delhaize will roll out small, automated warehouses to speed order picking and cut delivery times, Reuters has learned, as it revamps its ecommerce business in response to rising competition in a fast-growing sector.

At an investor event on Nov. 13, the world’s eighth biggest food retailer is set to showcase a partnership that will allow it to automate order collection at mini “robot supermarkets” attached to the stores of its U.S. chains like Stop & Shop.

Now Netherlands-based Ahold Delhaize is teaming up with Takeoff, a start-up which builds small warehouses that stack groceries to the ceiling to save space and use robot arms to assemble shoppers’ orders for items such as beer, milk, bread and fruit.

The warehouses serve as condensed supermarkets that can supply several stores with click-and-collect orders. They cost about $3 million to build, which Takeoff says is less than the cost of a typical store revamp.

“If it goes well, both from their side and our side, the hope is we would rapidly be able to build quite a few.”

Ahold Chief Executive Frans Muller confirmed the deal on Wednesday and said it should help expand online faster and at a lower cost than with standalone warehouses.

“With the robotized solution we can optimize those picking costs and be closer with micro fulfillment to our catchment areas. We also reduce the cost of the last mile,” he said.

Ahold’s shares jumped 5 percent on Wednesday as it reported third-quarter results that beat analysts’ forecasts, lifted by strong online sales and growth in its key markets.

Ahold’s move is the latest salvo in a war for the online grocery market that has escalated since Amazon’s takeover of Whole Foods last year. Whole Foods since launched same-day grocery delivery with Amazon’s Prime Now in more than 60 cities.

Other retailers are also racing to respond: Walmart will test Alert Innovation’s Alphabot automated grocery picking at a store in New Hampshire, and Kroger has teamed up with British online grocery expert Ocado.

Kroger said it will disclose the location for the first three U.S. sites out of a planned 20 high-tech Ocado warehouses in the next couple of weeks. They will take about two years to build and each cost Ocado about $39 million.

Ahold Delhaize, the operator of U.S. chains such as Giant Food, Food Lion and Hannaford, acquired Chicago-based online grocer Peapod in 2000 which is still the market leader.

However, growth has slowed at Peapod since Amazon bought Whole Foods and as supermarkets — including Ahold’s own chains like Stop & Shop — team up with start-ups like Instacart to offer curbside pick-up, or one- to two-hour delivery.

Ahold reported U.S. online sales growth picked up in the third quarter, but Muller said he was still not happy with that.

Until now, Ahold’s strategy has been largely manual. At its warehouses, known as “dark stores”, pickers grab items from shelves and put them into crates for packaging and delivery.

Ahold Delhaize has decades of experience in delivering groceries to people’s homes, starting in the Netherlands in 1986 when its Albert Heijn chain took orders by phone or fax.

At one Albert Heijn warehouse outside the Dutch city of Eindhoven, pickers each grab an average of one product every 10 seconds, walking about 4.5 km a day. Algorithms work out the shortest path through the aisles, and try to minimise trolley congestion.

Pawel Kamienczuk, a 28-year-old order picker from Poland, sweats as he races down an aisle, trying to meet a target of 380 items an hour.

“At the beginning, it took time to get used to it, but now I don’t feel tired,” he said.

Kamienczuk wears a device like a smartphone on his wrist which tells him where to go and which items to grab next.

He scans each product with a device mounted on his forefinger and puts it into one of 18 blue crates stacked on a large trolley.

Albert Heijn warehouses can pick and pack 135-140 units per labour hour, lower than Kamienczuk’s rate because it takes into account work done by others to unload supplies, stack shelves, assemble orders and pack delivery vans.