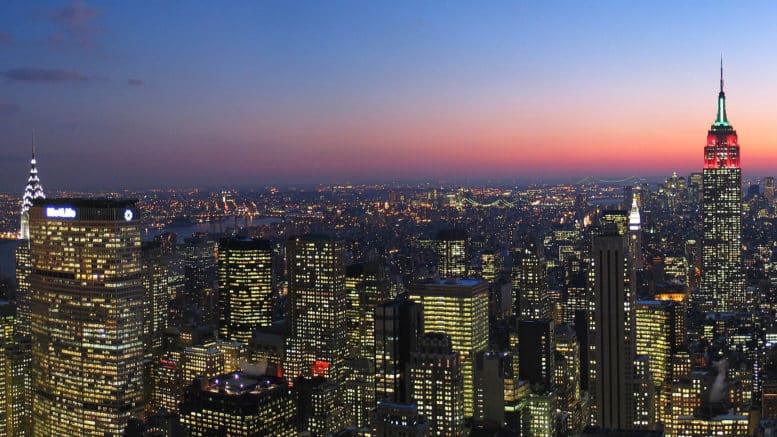 The New York City Council passed wide-ranging legislation to fight climate change known as the “Climate Mobilization Act,” a package of seven bills that supporters said would help build a “Green New Deal for New York City.” The legislation passed Thursday by a 45-2 vote, according to CityLab and multiple other reports.

The bills’ centerpiece requires buildings over 25,000 square feet to cut climate emissions 40% by 2030 and more than 80% by 2050, which officials said is “the most ambitious energy efficiency legislation in the country.” The legislation also requires green roofs on certain large buildings and establishes requirements for smaller buildings to do the same; creates a Property Assessed Clean Energy (PACE) financing mechanism for commercial property owners; simplifies the applications and siting process for wind turbine installation across the city; requires the Office of Alternative Energy to post and maintain links on its website on green roofs; and helps the city move towards shutting down its 24 gas-fired power plants in the city and replacing them with energy storage and renewable power, with a feasibility study to follow.

“The Climate Mobilization Act is a down payment on the future of New York City — one that ensures we lead the way in the ever-growing fight against climate change,” Council Member Costa Constantinides said in a statement before the bills passed.

This legislation represents perhaps the biggest and most ambitious city-level step to fight climate change, and leaders in New York City are urging their fellow major metropolitan areas to act. “We are on the precipice of climate disaster, and New York City is acting,” City Council Speaker Corey Johnson said in a statement on Twitter after the bills passed. “I hope other cities follow suit.”

The move to force large buildings in the city to cut emissions is an especially significant one, given that most emissions come from the building and transportation sectors. With numerous skyscrapers and other large developments in the city, cutting emissions there could be a major boon for the city’s environment.

Some advocates have noted the legislation is not perfect and may bleed into other issues the city faces around housing affordability. In a statement, the Energy Efficiency for All New York (EEFA NY) Coalition noted that buildings with rent-controlled housing face less strict requirements, while some affordable housing properties are completely exempt. EEFA NY warned that discrepancy will “exacerbate the housing quality deficit in the long term for communities of color and low-income New Yorkers.” The group said many affordable housing developments are among the city’s oldest buildings, which were built in less environmentally-conscious times and so do not live up to current standards. While EEFA NY said the legislation will create jobs, improve air quality and lower energy costs, it called for the New York legislature and the city to work to make it easier for affordable housing to hit emissions goals and help them recoup the costs of doing so.