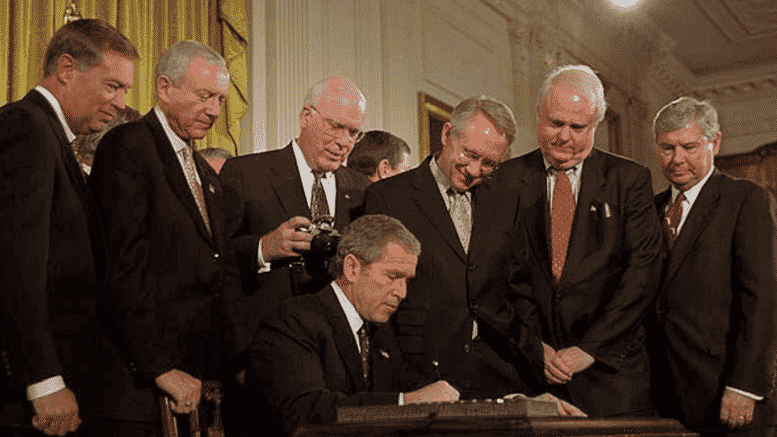 The Patriot Act was a watershed for Technocrats as it has enabled total surveillance. It has changed the entire law enforcement culture and practice in America.

Moreover, this happened right under America’s nose because everyone was focused on infighting between Democrats and Republicans instead of watching the ongoing back-room collusion between the two parties (and others) to drive the Constitution into the ground. ⁃ TN Editor

While Congress subjects the nation to its impeachment-flavored brand of bread-and-circus politics, our civil liberties continue to die a slow, painful death by a thousand cuts.

Case in point: while Americans have been fixated on the carefully orchestrated impeachment drama that continues to monopolize headlines, Congress passed and President Trump signed into law legislation extending three key provisions of the USA Patriot Act, which had been set to expire on December 15, 2019.

Once again, to no one’s surprise, the bureaucrats on both sides of the aisle—Democrats and Republicans alike—prioritized political grandstanding over principle and their oath of office to protect and defend the Constitution.

Today, while everyone is distracted by the impeachment drama, Congress will vote to extend warrantless data collection provisions of the #PatriotAct, by hiding this language on page 25 of the Continuing Resolution (CR) that temporarily funds the government. To sneak this through, Congress will first vote to suspend the rule which otherwise gives us (and the people) 72 hours to consider a bill. The scam here is that Democrats are alleging abuse of Presidential power, while simultaneously reauthorizing warrantless power to spy on citizens that no President should have… in a bill that continues to fund EVERYTHING the President does… and waiving their own rules to do it. I predict Democrats will vote on a party line to suspend the 72 hour rule. But after the rule is suspended, I suspect many Republicans will join most Democrats to pass the CR with the Patriot Act extension embedded in it.

Massie was right: Republicans and Democrats have no problem joining forces in order to maintain their joint stranglehold on power.

The legislation passed the Senate with a bipartisan 74-to-20 vote. It squeaked through the House of Representatives with a 231-192 margin. And it was signed by President Trump—who earlier this year floated the idea of making the government’s surveillance powers permanent—with nary a protest from anyone about its impact on the rights of the American people.

Spending bill or not, it didn’t have to shake down this way, even with the threat of yet another government shutdown looming.

Congress could have voted to separate the Patriot Act extension from the funding bill, as suggested by Rep. Justin Amash, but that didn’t fly. Instead as journalist Norman Solomon writes for Salon, “The cave-in was another bow to normalizing the U.S. government’s mass surveillance powers.”

That, right there, is the key to all of this: normalizing the U.S. government’s mass surveillance powers.

In the 18 years since the USA Patriot Act—a massive 342-page wish list of expanded powers for the FBI and CIA—was rammed through Congress in the wake of the so-called 9/11 terror attacks, it has snowballed into the eradication of every vital safeguard against government overreach, corruption and abuse.

The Patriot Act drove a stake through the heart of the Bill of Rights, violating at least six of the ten original amendments—the First, Fourth, Fifth, Sixth, Seventh and Eighth Amendments—and possibly the Thirteenth and Fourteenth Amendments, as well.

The Patriot Act also redefined terrorism so broadly that many non-terrorist political activities such as protest marches, demonstrations and civil disobedience are now considered potential terrorist acts, thereby rendering anyone desiring to engage in protected First Amendment expressive activities as suspects of the surveillance state.

The Patriot Act justified broader domestic surveillance, the logic being that if government agents knew more about each American, they could distinguish the terrorists from law-abiding citizens—no doubt a reflexive impulse shared by small-town police and federal agents alike.

This, according to Washington Post reporter Robert O’Harrow, Jr., was a fantasy that “had been brewing in the law enforcement world for a long time.” And 9/11 provided the government with the perfect excuse for conducting far-reaching surveillance and collecting mountains of information on even the most law-abiding citizen.

Federal agents and police officers are now authorized to conduct covert black bag “sneak-and-peak” searches of homes and offices while you are away and confiscate your personal property without first notifying you of their intent or their presence.

The law also granted the FBI the right to come to your place of employment, demand your personal records and question your supervisors and fellow employees, all without notifying you; allowed the government access to your medical records, school records and practically every personal record about you; and allowed the government to secretly demand to see records of books or magazines you’ve checked out in any public library and Internet sites you’ve visited (at least 545 libraries received such demands in the first year following passage of the Patriot Act).

In the name of fighting terrorism, government officials are now permitted to monitor religious and political institutions with no suspicion of criminal wrongdoing; prosecute librarians or keepers of any other records if they tell anyone that the government has subpoenaed information related to a terror investigation; monitor conversations between attorneys and clients; search and seize Americans’ papers and effects without showing probable cause; and jail Americans indefinitely without a trial, among other things.

The federal government also made liberal use of its new powers, especially through the use (and abuse) of the nefarious national security letters, which allow the FBI to demand personal customer records from Internet Service Providers, financial institutions and credit companies at the mere say-so of the government agent in charge of a local FBI office and without prior court approval.

In fact, since 9/11, we’ve been spied on by surveillance cameras, eavesdropped on by government agents, had our belongings searched, our phones tapped, our mail opened, our email monitored, our opinions questioned, our purchases scrutinized (under the USA Patriot Act, banks are required to analyze your transactions for any patterns that raise suspicion and to see if you are connected to any objectionable people), and our activities watched.

We’re also being subjected to invasive patdowns and whole-body scans of our persons and seizures of our electronic devices in the nation’s airports. We can’t even purchase certain cold medicines at the pharmacy anymore without it being reported to the government and our names being placed on a watch list.

It’s only getting worse, folks.

Largely due to the continuous noise from television news’ talking heads, most Americans have been lulled into thinking that the pressing issues are voting in the next election, but the real issue is simply this: the freedoms in the Bill of Rights are being eviscerated.

The Constitution has been steadily chipped away at, undermined, eroded, whittled down, and generally discarded to such an extent that what we are left with today is but a shadow of the robust document adopted more than two centuries ago. Most of the damage has been inflicted upon the Bill of Rights—the first ten amendments to the Constitution—which historically served as the bulwark from government abuse.

Set against a backdrop of government surveillance, militarized police, SWAT team raids, asset forfeiture, eminent domain, overcriminalization, armed surveillance drones, whole body scanners, stop and frisk searches and the like—all sanctioned by Congress, the White House and the courts—a recitation of the Bill of Rights would understandably sound more like a eulogy to freedoms lost than an affirmation of rights we truly possess.

We can pretend that the Constitution, which was written to hold the government accountable, is still our governing document. However, the reality we must come to terms with is that in the America we live in today, the government does whatever it wants, freedom be damned.

What once were considered inalienable, fundamental “rights”  are now mere privileges to be taken away on a government bureaucrat’s say-so.

To those who have been paying attention, this should come as no real surprise.

As I make clear in my book Battlefield America: The War on the American People, the Constitution has been on life support for some time now, and is drawing its final breaths.

The American government, never a staunch advocate of civil liberties, has been writing its own orders for some time now. Indeed, as the McCarthy era and the wiretapping of Martin Luther King Jr. and others illustrates, the government’s amassing of power, especially in relation to its ability to spy on Americans, predates the passage of the Patriot Act in 2001.

What the Patriot Act and its subsequent incarnations did was legitimize what had previously been covert and frowned upon as a violation of Americans’ long-cherished privacy rights.

After all, the history of governments is that they inevitably overreach.

Thus, enabled by a paper tiger Congress, the president and other agencies of the federal government have repeatedly laid claim to a host of powers, among them the ability to use the military as a police force, spy on Americans and detain individuals without granting them access to an attorney or the courts. And as the government’s powers have grown, unchecked, the American people have gradually become used to these relentless intrusions into their lives.

In turn, the American people have become the proverbial boiling frogs, so desensitized to the government’s steady encroachments on their rights that civil liberties abuses have become par for the course.

Yet as long as government agencies are allowed to make a mockery of the very laws intended to limit their reach, curtail their activities, and guard against the very abuses to which we are being subjected on a daily basis, our individual freedoms will continue to be eviscerated so that the government’s powers can be expanded, the Constitution be damned.

Constitutional attorney and author John W. Whitehead is founder and president of The Rutherford Institute. His new book Battlefield America: The War on the American People  is available at www.amazon.com. Whitehead can be contacted at johnw@rutherford.org.