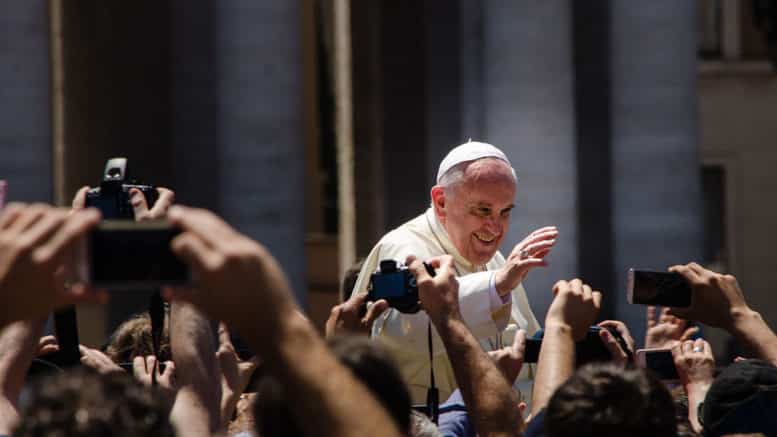 Please Share This Story!
PDF 📄
Militant Technocrats inside the Vatican have convinced Pope Francis to push nations to criminalize the vague act of “ecocide” in order to punish individuals and corporations for harming the environment.  ⁃ TN Editor

Pope Francis told a group of lawyers that he could like to introduce the category of “ecological sin” into official Catholic teaching.

“We must introduce – we are thinking about it – in the Catechism of the Catholic Church the sin against ecology, the ecological sin against the common home, because it is a duty,” the pope said Friday in addressing participants in an international conference on penal law.

More specifically, Francis said, are all those actions that can be considered as “ecocide,” for instance, “the massive contamination of air, land and water resources, the large-scale destruction of flora and fauna, and any action capable of producing an ecological disaster or destroying an ecosystem.”

Ecocide “is to be understood as the loss, damage or destruction of the ecosystems of a given territory, so that its utilization by inhabitants has been or can be seen as severely compromised,” he said, adding that such a sin is “a fifth category of crimes against peace, which should be recognised as such by the international community.”

The pontiff said that such actions are “usually” caused by corporations, and “an elementary sense of justice would require” that they be punished for them.

An ecological sin is “an action or omission against God, against one’s neighbour, the community and the environment,” Francis said, quoting the Fathers of the recently concluded Pan-Amazon Regional Synod. “It is a sin against future generations and is manifested in acts and habits of pollution and destruction of the harmony of the environment, in transgressions against the principles of interdependence and in the breaking of networks of solidarity between creatures.”

Above and beyond its sinfulness, failure to care for the environment is an injustice and a crime, Francis suggested and should be legally enforced. “I would like to appeal to all the leaders and actors in this area to contribute their efforts to ensuring adequate legal protection for our common home,” he said.

The pope’s words coincided with the release of a new survey by the Pew Research Center, which found that church-going Americans accept their clergy’s on spiritual matters, but generally distrust their advice on issues such as climate change.

“The pontiff said that such actions are “usually” caused by corporations, and ‘an elementary sense of justice would require’ that they be punished for them.” Boy, the Catholic Church is really just one big STATUS QUO organization. No matter the millennium it never changes. When any Pope wants a change they use the same tools and the same ol’ BS of the way distant past. PUNISH THEM!!! The Inquisition would agree with and be proud of this 2020 Pope. OMG. I agree that taking personal responsibility for Earth each and every day is imperative for every human. I do not… Read more »

Even the Catholic Church is a “she” now?? That makes as much sense as ecological sin. Do Catholic parishoners ever get tired of paying for the sins of the world? First, they’ve been paying for all the sexual abuse claims, and now they may end up paying for the climates. What makes the most sense, however, is that Globalists know that the Vatican has more money than God in its vault.

Even the Catholic Church is a “she” now?? That makes as much sense as ecological sin. What makes the most sense, however, is that the Globalists know that the Vatican has more money than God in its vaults.

Jesuit Pope, Why make a new commandment? The Roman Church does not obey any other commandments. Here is a couple: Thou shalt have no other gods before me, Thou shalt not make unto thee any graven image, or likeness of any thing that is in heaven above, or that is in the earth beneath, or that is in the water under the earth, Thou shalt not bow down (to Mary, etc) thy self to them: for I the LORD thy God am a jealous God, visiting the iniquity of the fathers upon the children unto the third and fourth generation… Read more »

Whatever they are teaching people, it is far from the Christianity of the Bible and what Jesus taught.