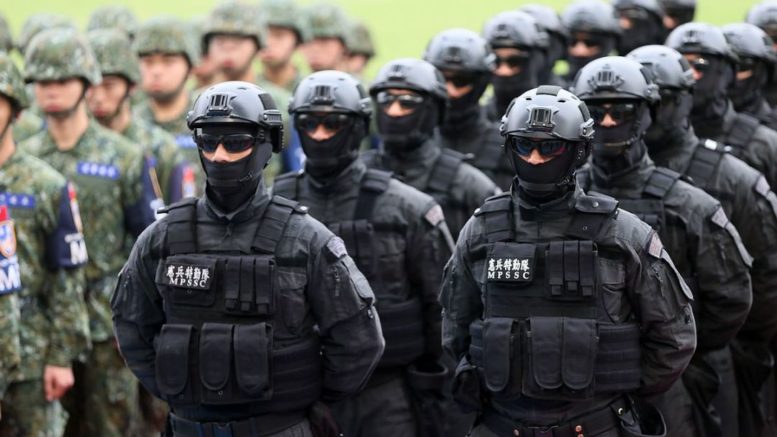 Please Share This Story!
PDF 📄
China is a Technocracy but it is also totalitarian, and is exhibiting many of the characteristics of Hitler’s Third Reich: concentration camps, institutionalized racism. ubiquitous command and control, environmental rhetoric, etc. ⁃ TN Editor

More than a million people, for no reason other than their ethnicity or religion, are held in concentration camps in what Beijing calls the Xinjiang Uygur Autonomous Region. Picture: Chinese police clash with ethnic Uighur women during a protest in Urumqi, the capital of Xinjiang, on July 7, 2009. (Photo by Guang Niu/Getty Images)

More than a million people, for no reason other than their ethnicity or religion, are held in concentration camps in what Beijing calls the Xinjiang Uygur Autonomous Region and what traditional inhabitants of the area, the Uighurs, say is East Turkestan. In addition to Uighurs, ethnic Kazakhs are also held in these facilities.

Families in this troubled area, shown on maps as the northwestern portion of the People’s Republic of China, are being torn apart. The children of imprisoned Uighur and Kazakh parents are “confined” to “schools” that are separated from the outside by barbed wire and heavy police patrols. They are denied instruction in their own language, forced to learn Mandarin Chinese. The controls are part of a so-called “Hanification” policy, a program of forced assimilation. “Han” is the name of China’s dominant ethnic group.

Because Uighurs and Kazakhs are dying in the camps in considerable numbers, Beijing is building crematoria to eradicate burial traditions while disposing of corpses.

The camps, a crime against humanity, are spreading. China is now building similar facilities, given various euphemistic names such as “vocational training centers,” in Tibet, in China’s southwest.

At the same time, Beijing is renewing its attempt to eliminate religion country-wide. Christians have come under even greater attack across China, as have Buddhists. China’s ruler, Xi Jinping, demands that the five recognized religions — official recognition is a control mechanism — “Sinicize.” The Chinese, as a part of this ruthless and relentless effort, are destroying mosques and churches, forcing devout Muslims to drink alcohol and eat pork, inserting Han officials to live in Muslim homes, and ending religious instruction for minors.

These attempts, which have antecedents in Chinese history, have been intensified since Xi became the Communist Party’s general secretary in November 2012.

At the same time, Xi, far more than his predecessors, has been promoting the concept of a world order ruled by only one sovereign, a Chinese one.

In broad outline, Xi’s vision of the world is remarkably similar to that of the Third Reich, at least before the mass murders.

The Third Reich and the People’s Republic share a virulent racism, in China politely referred to as “Han chauvinism.” The Han category, which is said to include about 92% of the population of the People’s Republic, is in truth the amalgamation of related ethnic groups.

Chinese mythology holds that all Chinese are descendants of the Yellow Emperor, who is thought to have ruled in the third millennium BCE. The Chinese consider themselves to be a branch of humanity separate from the rest of the world, a view reinforced by indoctrination in schools, among other means.

Chinese scholars support this notion of Chinese separateness with the “Peking Man” theory of evolution, which holds the Chinese do not share a common African ancestor with the remainder of humankind. This theory of the unique evolution of the Chinese has, not surprisingly, reinforced racist views.

As a result of racism, many in China, including officials, “believe themselves to be categorically different from and impliedly superior to the rest of the humankind,” writes Fei-Ling Wang, author of The China Order: Centralia, World Empire, and the Nature of Chinese Power.

The racism, therefore, is institutionalized and openly promoted. That was painfully evident last year in the 13-minute skit on China Central Television’s Spring Festival Gala, the premier television show in China. In “Let’s Celebrate Together,” a Chinese actress in blackface played a Kenyan mother, who had an enormous bosom and ridiculously large buttocks. Worse, her sidekick was a human-size monkey. The combination of the monkey and the woman was an echo of the Hubei Provincial Museum exhibit, “This is Africa,” which in 2017 displayed photographs of Africans flush next to images of primates.

In recent years, there have been many ugly portrayals of Africans in Chinese media, and although the skit last year was not the worst, it was striking because the main state broadcaster, by airing it to about 800 million viewers, made it clear Chinese officials think of Africans as both objects of derision and subhuman. In these circumstances, it is a safe assumption that these views are shared by the Beijing leadership, which, alarmingly, is making more frequent race-based appeals to Chinese people — and not only those in China.

Jim Maarrs dubbed the US the Fourth Reich in his book.

This article is a piece of agit prop. and while it may contain certain truths it is obviously over the top in many aspects. It is my guess that there will be more styles of Technocracy than a Chinese one size fits all. At least until a second phase is introduced where natural human beings, as created by nature, may disappear altogether under a wave of genetic modifications.

What could go wrong!?

China is being China as China has been for 3000 years. The technology is just a bit more advanced now.

They already have killed 30 million of their own, at least. I’d say that qualifies right there.

I would say the USA is already the 4th Reich, making China the 5th and perhaps the last.

I’m sorry, but I don’t see the problem. I think all country’s should do the same

Skip the ‘concentration camps’ nonsense. The Chinese perceive Muslims as a threat: a dangerously extremist cult. From the Chinese perspective attempting to deprogram Muslims from the intensive brain washing they have been exposed to (and consequently protecting the rest of society) is a humanitarian gesture. Apparently they refuse to acknowledge Islam as ‘the religion of Peace’.

China is being used as theexpiriment and template for what they globalist want to create. But it will get worse