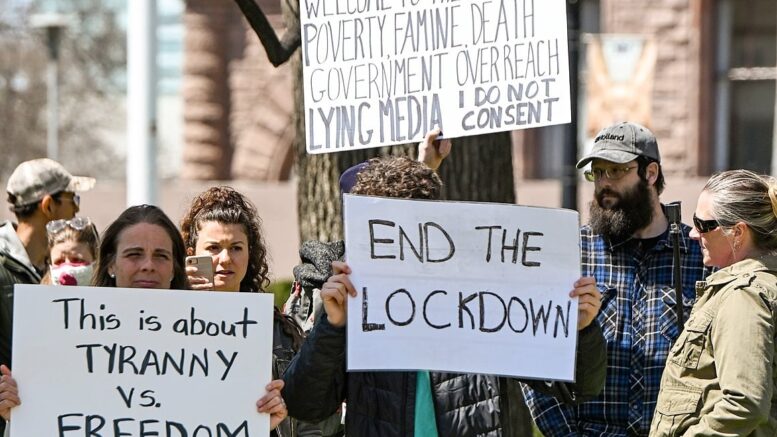 Please Share This Story!
PDF 📄
The existential threat to the world, including America, is the tyranny of Technocracy. As the twisted and fraudulent narrative takes on a life of its own, only citizens can throw off the intended yoke of Scientific Dictatorship. ⁃ TN Editor

With the presidential election highly contested and the mainstream media hyping the rising infection numbers, the public is now facing important questions regarding the future of the pandemic response. Some states have decided to unilaterally introduce “executive orders” to restrict citizen movements, business openings and public activities.

Anthony Fauci is on the news constantly, calling for families to cancel Thanksgiving and Christmas and telling Americans to just “do what we are told”. The media is generally trying to drum up fear in the minds of the populace and paint images of plague and death everywhere. If Biden does actually end up in the White House, a federalized and national high level lockdown is on the table starting in January.

In April of this year I published an article titled ‘Waves Of Mutilation: Medical Tyranny And The Cashless Society’, which outlined a social engineering model put forward by globalists at MIT and the Imperial College of London which I called “wave theory”. The model essentially works like this:

Governments must use the pandemic as a rationale for “waves” of restrictive lockdowns, followed by controlled re-openings of the economy and of normal human activity. Globalists claim that this will “slow” the spread of the coronavirus and save lives. However, they also openly admit that these cycles of closures and openings have other uses.

Over time, the citizenry becomes acclimated to governmental intrusion in their everyday lives, and they get used to the idea of bureaucracy telling them what they are not allowed to do when it comes to the simplest activities. The system thus bottlenecks all human interactions to the point that we are constantly asking for permission. We become slaves to the Covid response.

As globalist Gideon Lichfield from MIT stated in his article ‘We’re Not Going Back To Normal’:

“Ultimately, however, I predict that we’ll restore the ability to socialize safely by developing more sophisticated ways to identify who is a disease risk and who isn’t, and discriminating—legally—against those who are.

…one can imagine a world in which, to get on a flight, perhaps you’ll have to be signed up to a service that tracks your movements via your phone. The airline wouldn’t be able to see where you’d gone, but it would get an alert if you’d been close to known infected people or disease hot spots. There’d be similar requirements at the entrance to large venues, government buildings, or public transport hubs. There would be temperature scanners everywhere, and your workplace might demand you wear a monitor that tracks your temperature or other vital signs. Where nightclubs ask for proof of age, in future they might ask for proof of immunity—an identity card or some kind of digital verification via your phone, showing you’ve already recovered from or been vaccinated against the latest virus strains.”

Note that Lichfield suggested that in order to participate in the normal economy you might need to show verification that you have been “vaccinated against the latest virus strains”. In other words, the elites expect there to be many more viral events or mutations AFTER Covid 19 has run its course, and the restrictions and controls we see today are meant to continue, possibly FOREVER.

The reality is that the wave model is not a very practical plan for stopping viral spread, but it is a perfect method for conditioning people to submit to a high level of control over their personal lives that they never would have accepted otherwise. The Covid response has also been heralded by elites at the World Economic Forum as a perfect “opportunity” to initiate what they call the “Great Reset”. The reset is a plan to deconstruct what’s left of the free market capitalist system, introduce carbon controls in the name of the global warming fraud, institute a global cashless monetary system, and finally, move humanity into what they call a “shared economy” in which the average person is no longer allowed to own private property of any kind and is completely dependent on the system for their basic necessities.

Of course, such a complex system of “solutions” (dominance) over every individual would need to be managed in a highly centralized way. Meaning, global governance by the elitist establishment would be the end result. Naturally….the globalists would reluctantly take the reins of power for “the greater good”.

This is the bigger picture, the underlying threat at the core of the lockdowns and Covid laws. That said, there are also numerous arguments based on logic and evidence as to why there is no reason for people to submit to such restrictions. Let’s outline them in a simple list:

The Coronavirus Kills Less Than 1% Of The People It Infects

Medical studies in the US indicate that the coronavirus deaths rate for citizens NOT living in nursing homes has been holding well below 1% on average. The largest percentage of deaths by far in the US has been in nursing homes among elderly people with preexisting conditions. People in long term care facilities make up 8% of Covid infection cases but they are 45% of all covid deaths.

Pneumonia alone kills around 50,000 Americans each year according to the CDC, and that’s with vaccinations, yet, we are supposed to panic and hand over all our freedoms in the name of stopping a disease which affects a tiny percentage of the population? This is why the media and governments have decided to hyperfocus on infection numbers rather than deaths. The death numbers do not warrant the amount of panic the establishment is trying to foment.

It’s basic math and finance; the small business sector of the US economy is dying. Small businesses make up around 50% of US employment. The Covid bailout money, handled by international banks like JP Morgan, did not get to the vast majority of small businesses that were supposed to receive it. Those businesses that did get bailouts are still on the verge of closure or bankruptcy. Any further lockdowns will be the final nail in the coffin for the US economy, except for major corporations which are enjoying the lion’s share of stimulus cash.

How many lives will be damaged or lost due to poverty and economic collapse if the current trend continues? I suspect far more than any lives lost because of Covid.

Why is no one in the mainstream talking about the most practical solution to the pandemic? The small percentage of people who are most at risk can STAY HOME and take precautions as necessary, while the rest of us get on with our lives. Why are we being ordered to do the exact opposite just to make less than 1% of the population feel safer? How is this logical, reasonable or scientific? The only answer that makes sense is that the lockdown response is about control, not saving lives.

State Governors Have No Authority To Take Away Your Civil Liberties, And Neither Does The President

Restrictions based on executive orders have no legal authority under the Constitution. They are color of law, not true law. Laws are debated and passed by state legislatures, not by state governors. Executive orders only apply to state employees and have no bearing on the citizenry.

Leftists and statists argue that during a national crisis the governor has emergency powers and states can do whatever they want. This is false. Under the constitution and the Bill of Rights, state governors do not get to proclaim a national emergency based on their personal opinion and then declare themselves dictators in response. Any “laws” exerted because of such a process are therefor null and void; they are meaningless.

If the states have the ability to do whatever they want without oversight, then they would be able to bring back Jim Crow laws (among other things). Do leftists support that idea as well? If the federal government and the president have the power to violate the Bill of Rights during a national emergency, then Donald Trump has the authority to bring in martial law across the country because of leftist riots. Do leftists agree with that outcome?

It is interesting to me that the political left in particular is so keen on defending the idea of states and governors having the power to unilaterally enforce pandemic restrictions without oversight or checks and balances. Yet, they have been aggressively opposed to state powers in the past when they had a Democratic president like Obama in office. The left has also been staunchly opposed to executive orders applied by Donald Trump, but they applaud the idea of executive orders on lockdowns being instituted by Biden.

On top of that, some states and countries with the most stringent mask laws continue to see huge spikes in coronavirus infections. For example, New York has been one of the most tyrannical enforcers of mask laws and lockdowns in the US, but in November the state has witnessed extensive infection increases. California, Michigan and Illinois have also seen dramatic infection spikes this month despite hard enforcement of masks. So, where is the science?

It would appear that masks are a placebo; if they actually worked, then the states with the most aggressive enforcement should be seeing a dramatic downturn in cases, not exponential increases.

Furthermore, why are many states and countries trying to force citizens to wear masks outside in open air and sunlight when viruses cannot survive in such conditions? UV light from the sun is nature’s sterilizer, but no one in the mainstream or in government acknowledges this scientific fact. Again, this shows that mask laws are about control, not about science or saving lives.

The folks behind the mask and vaccine mandates don’t care about the world economy, I.e. for those of us whose lives and livelihoods depend on a robust economy. Neither do they care about good human health. Some of us are blessed with eyes and ears to see and hear that the devil is in the details regarding everything covid19 related. Eugenicists aren’t satisfied with the magnitude of mental and physical health issues they have heaped on humanity thanks to their voodoo medicine. They have planned, worked and decided to destroy our spirits along with our souls and bodies. The satanic… Read more »

Litchfield can go F himself