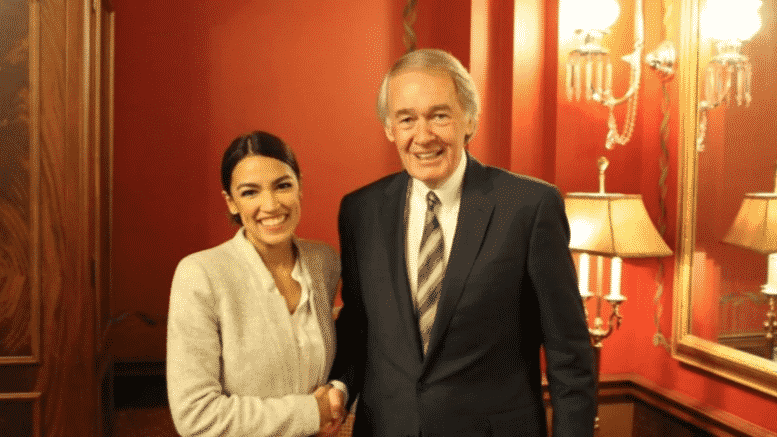 Please Share This Story!
PDF 📄
Sooner or later, Democrats will regain control of Congress and the Green New Deal will be fully actuated. This will be the coup that the United Nations has been waiting for for over four decades and a rush into full-blown Technocracy. ⁃ TN Editor

Rising Democratic star Rep. Alexandria Ocasio-Cortez and Democratic Senator Ed Markey on Thursday laid out the goals of a Green New Deal to achieve net-zero greenhouse gas emissions in 10 years, setting a high bar for Democrats who plan to make climate change a central issue in the 2020 presidential race.

The resolution is the first formal attempt by lawmakers to define the scale of legislation to create large-scale government-led investments in clean energy and infrastructure to transform the U.S. economy.

“The Green New Deal fully tackles the existential threat posed by climate change by presenting a comprehensive, 10-year plan that is as big as the problem it hopes to solve while creating a new era of shared prosperity,” according to a summary of the resolution released by the lawmakers on Thursday.

Ocasio-Cortez said she will immediately begin to work on legislation that would “fully flesh out the projects involved in the Green New Deal.”

Republicans have already criticized the initiative, waving off any kind of proposal as heavy-handed. The Trump administration does not believe action on climate change is necessary and is focused on increasing production of oil, gas and coal on federal and private land.

Doug Lamborn, a Republican from Colorado, said at a climate change hearing in the House natural resources committee on Wednesday that the policy was akin to a “Soviet five-year plan.”

The non-binding resolution outlines several goals for the United States to meet in 10 years, including meeting 100 percent of power demand from zero-emissions energy sources.

“The analysis of satellite lower troposphere temperature data compared to observatory CO2 concentration data contradicts the IPCC claim that CO2 causes atmospheric warming. Instead, the analysis shows that there is a statistically significant probability that the temperature controls the rate of change of the CO2 concentration.” ~ Bevan Dockery, geophysicist. https://dockery208841154.files.wordpress.com/2018/05/co2_vs_temp_2018_paper_2.pdf?fbclid=IwAR3zL_cQYz54L75W_eodUXQ4gFejnySn3BXL1H_9ViuS0yscwdRskBciuyQ

Pray tell what is “sustainable” about it? If the US went carbon neutral tomorrow it would do practically nothing to stop “global warming”.