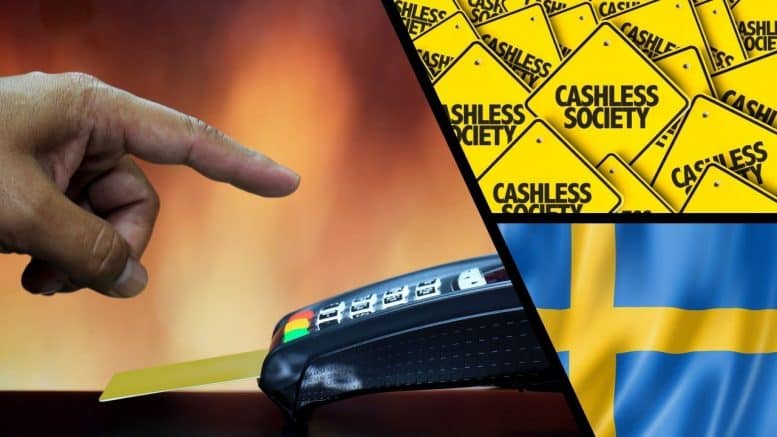 In a rare first, Sweden’s lawmakers are battling Technocrats over cash v. cashlessness. Its central bank, in collusion with national banks have apparently gone too far, too fast to strip cash from the banking system. Alarmed lawmakers are now going toe to toe with these bankers to stop them. A cashless society is key to implementing Technocracy, so this will be telling to see who wins this battle. ⁃ TN Editor

A key committee of Swedish lawmakers wants to force the country’s biggest banks to handle cash in an effort to halt the nation’s march toward complete cashlessness.

Parliament’s Riksbank committee, which is in the process of reviewing the central bank law, proposed making it mandatory for banks to offer cash withdrawals and handle daily receipts. The requirement would apply to banks that provide checking accounts and have more than 70 billion kronor ($8 billion) in deposits from the Swedish public, according to a report.

The lawmakers said there needs to be “reasonable access to those services in all of Sweden,” and that 99 percent of Swedes should have a maximum distance of 25 kilometers (16 miles) to the nearest cash withdrawal. The requirement doesn’t state how banks should offer those services, and lenders can choose whether to use a third party, machines or over-the-counter services.

The move is a response to Sweden’s rapid transformation as it becomes one of the most cashless societies in the world. That’s led to concerns that some people are finding it increasingly difficult to cope without access to mobile phones or bank cards. There are also fears around what would happen if the digital payments systems suddenly crashed.

“We believe that the continued development of access to cash in society needs to take place in a controlled manner so that the public’s and society’s need for cash is fulfilled,” the committee said in an op-ed in Dagens Nyheter.

The committee began looking at these issues amid worries that cash was disappearing too fast. A majority of bank branches in Sweden have stopped handling cash over the counter, and many shops and restaurants are also rejecting physical money. Still, a recent Riksbank study showed that the decline of cash is driven by the fact that Swedes prefer using electronic payments such as debit cards and mobile payments.

The Swedish Bankers’ Association said the plan would violate European Union laws on state aid and competition by forcing only a few banks to guarantee the supply of cash.

“To introduce a legal requirement where a few banks will be forced to manage cash supply in the country is legally very doubtful, as the same requirement isn’t placed on the other banks and other companies in the cash handling chain, such as retailers and cash-in-transit companies,” Hans Lindberg, the association’s director general, said in a statement.

The proposal will result in “significantly increased costs” of as much as 100 million kronor a year for banks and customers, according to the group. The report also fails to mention that Riksbank now only has one cash depot left after closing 23 facilities, which has hampered the private sector’s cash usage, the group said.

While Financial Markets Minister Per Bolund in April also questioned the legality of forcing banks to handle cash, in an interview on Monday he said there was “strength” in the proposal since it’s backed by all the parties in parliament.

He declined to say whether the government would support the proposal, which will now be sent out on a consultation round.