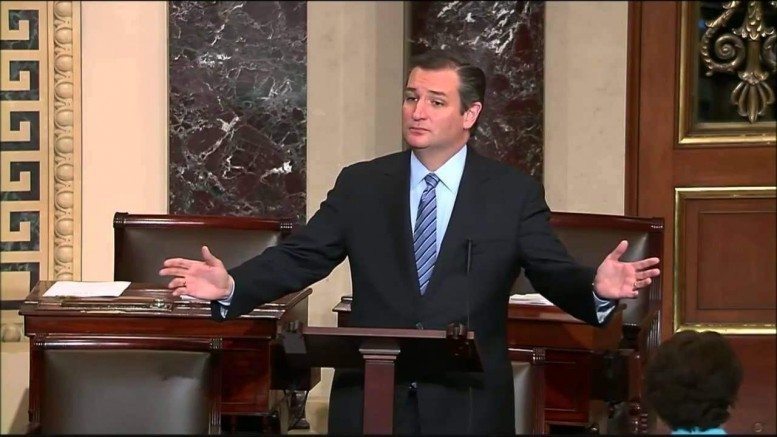 Like him or not, Senator Ted Cruz (R-TX) is leading the charge in the Senate to block Obama’s intended giveaway of control over the Internet by the end of this year. ICANN is a Technocrat organization that controls domain names globally. Goran Marby, CEO of ICANN, testified that “We are a nonpolitical technical entity“, and therein lies the problem. Technocrats don’t care which master they serve because they are apolitical. They need political oversight and restriction. If we give up our role, they will just as gladly serve totalitarian interests elsewhere. ⁃ TN Editor

During an often-contentious hearing Wednesday, Sen. Ted Cruz, R-Texas, took on the Obama administration for what has become his latest signature issue: internet oversight.

The Obama administration is due to relinquish U.S. control Oct. 1 over a private-sector, nonprofit organization that administers internet domain names and designations. Cruz warned that the Internet Corp. for Assigned Names and Numbers will not on its own honor U.S. protections of free speech, and he is leading an effort to delay or stop the transfer.

“Under the guardianship of the United States and the First Amendment the internet has become truly an oasis of freedom, but that could soon change,” Cruz said at a hearing of the Senate Judiciary Committee’s Subcommittee on Oversight, Agency Action, Federal Rights and Federal Courts, which he chairs.

“It is not a democratic body,” Cruz said of the organization, which includes such internet stakeholders as Google and Facebook and is based in Los Angeles. And he warned that authoritarian countries such as China, Russia and Iran could exert control over the organization and censor internet use in their countries.

he Obama administration maintains that the transfer involves technical matters that do not affect the substance of websites or the flow of information. Sen. Chris Coons, D-Del., the ranking member on the subcommittee, said the transition was really a “clerical process.” “The United States does not own the internet,” he said.

Cruz is poised to add an amendment to a temporary government funding bill to block the transfer – the same tactic he used in 2013 to stop funding the federal health care law, which led to a partial federal government shutdown. However, this time, Cruz has mainstream support from powerful Republicans.

Sen. Charles Grassley, R-Iowa, who is the chairman of the Senate Judiciary Committee, attended the subcommittee hearing and was supportive of putting off the transfer.

“A number of significant questions related to the transition remain unanswered, including whether the transition will yield an unconstitutional transfer of United States government property, how the transfer will affect human rights and free speech issues, if U.S.-controlled top-level domains such as .gov and .mil could be compromised or if ICANN will be subject to increased antitrust scrutiny,” he said.

Goran Marby, the internet corporation’s CEO and president, told the committee, “We are a nonpolitical technical entity.”

Thank you Ted Cruz for doing what ALL our Representatives and Senators should be doing-protect the interests of the United States. Show us you care, Washington-get behind Sen.Cruz.

WE STAND FOR CRUZ

Ted Cruz,hmmm? If so, perhaps I’ll moderate my negative assessment of him – IF this is true. I’ve lost a lot of faith in that boy, and also respect. He can earn them back by showing he WANTS to be a GOOD American and not an oath breaking RINO.

Its about time someone in Washington woke up. I’m also surprised that this didn’t become a political issue in the presidential campaign? Freedom of the internet?
freedom of the press, freedom of speech. Now for the safety of the internet if a private company can run or operate the internet hacking will be easier because all the safeguards can be removed or replaced by the highest bidder or just plain sold outright. WAKE UP AMERICA

Way to go Ted! Keep sticking it to Bath-house Barry (first US president with a ladyboy first lady….no wonder the USA is a joke to the rest of the world!). Thanks for protecting our freedoms!

I thought Hillary was the first one to leave the toilet seat up in the WH. How come we can’t boot Muslim terrorists off the net if we control it? I trust the party that Putin likes, NOT.

Another sellout by Obama. Isn’t it time to have that ignorant fool step aside, and ask Paul Ryan to grow some sack!

Keep on doing the right thing Ted Cruz, and thank you for standing by Kim Davis in her time of unlawful persecution. YOU ARE THE MAN !!!!!!

Look up March 29th 2016 and see who broke the oath 1st. Mr.Trump said that he will not support the ‘Senator’ nor will he need his support. Google it! Go Cruz!!! Wake up America!!

Mr. Cruz is the only senator standing against Obama’s 5th column destruction of America, which the media refuses report. Its too late to return freedom after it lost.
God Bless Ted, who should’ve been the Republican candidate.

I wish Ted Cruz was our President. He has always been my 1st choice.

BTW, where is the picture of Bush meeting Saddam in 1979? Or the Cruz
(ha) missile engine sitting in front of the Pentagon on 9/11? Or what, if anything, hit Building 7 in the WTC? No censorship here.