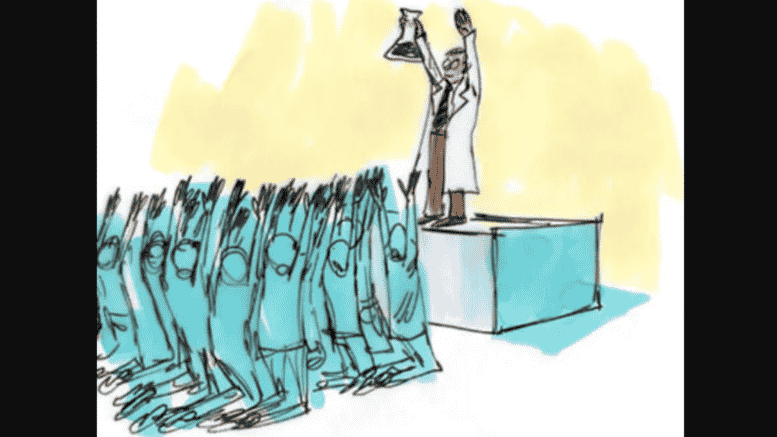 Please Share This Story!
PDF 📄
Both Technocracy and Transhumanism are products of Scientism; both promote pseudoscience as real science and then demand that we follow the fake science. Scientism is a deep philosophical religious proposition that itself masquerades as a non-religion, so it is often obscured in the havoc it causes. In 1944, C.S. Lewis reasoned that Scientism would eventually result in the Abolition of Man. ⁃ TN Editor

When I decided on a scientific career, one of the things that appealed to me about science was the modesty of its practitioners. The typical scientist seemed to be a person who knew one small corner of the natural world and knew it very well, better than most other human beings living and better even than most who had ever lived. But outside of their circumscribed areas of expertise, scientists would hesitate to express an authoritative opinion. This attitude was attractive precisely because it stood in sharp contrast to the arrogance of the philosophers of the positivist tradition, who claimed for science and its practitioners a broad authority with which many practicing scientists themselves were uncomfortable.

The temptation to overreach, however, seems increasingly indulged today in discussions about science. Both in the work of professional philosophers and in popular writings by natural scientists, it is frequently claimed that natural science does or soon will constitute the entire domain of truth. And this attitude is becoming more widespread among scientists themselves. All too many of my contemporaries in science have accepted without question the hype that suggests that an advanced degree in some area of natural science confers the ability to pontificate wisely on any and all subjects.

Of course, from the very beginning of the modern scientific enterprise, there have been scientists and philosophers who have been so impressed with the ability of the natural sciences to advance knowledge that they have asserted that these sciences are the only valid way of seeking knowledge in any field. A forthright expression of this viewpoint has been made by the chemist Peter Atkins, who in his 1995 essay “Science as Truth” asserts the “universal competence” of science. This position has been called scientism — a term that was originally intended to be pejorative but has been claimed as a badge of honor by some of its most vocal proponents. In their 2007 book Every Thing Must Go: Metaphysics Naturalized, for example, philosophers James Ladyman, Don Ross, and David Spurrett go so far as to entitle a chapter “In Defense of Scientism.”

Modern science is often described as having emerged from philosophy; many of the early modern scientists were engaged in what they called “natural philosophy.” Later, philosophy came to be seen as an activity distinct from but integral to natural science, with each addressing separate but complementary questions — supporting, correcting, and supplying knowledge to one another. But the status of philosophy has fallen quite a bit in recent times. Central to scientism is the grabbing of nearly the entire territory of what were once considered questions that properly belong to philosophy. Scientism takes science to be not only better than philosophy at answering such questions, but the only means of answering them. For most of those who dabble in scientism, this shift is unacknowledged, and may not even be recognized. But for others, it is explicit. Atkins, for example, is scathing in his dismissal of the entire field: “I consider it to be a defensible proposition that no philosopher has helped to elucidate nature; philosophy is but the refinement of hindrance.”

Is scientism defensible? Is it really true that natural science provides a satisfying and reasonably complete account of everything we see, experience, and seek to understand — of every phenomenon in the universe? And is it true that science is more capable, even singularly capable, of answering the questions that once were addressed by philosophy? This subject is too large to tackle all at once. But by looking briefly at the modern understandings of science and philosophy on which scientism rests, and examining a few case studies of the attempt to supplant philosophy entirely with science, we might get a sense of how the reach of scientism exceeds its grasp.

If philosophy is regarded as a legitimate and necessary discipline, then one might think that a certain degree of philosophical training would be very useful to a scientist. Scientists ought to be able to recognize how often philosophical issues arise in their work — that is, issues that cannot be resolved by arguments that make recourse solely to inference and empirical observation. In most cases, these issues arise because practicing scientists, like all people, are prone to philosophical errors. To take an obvious example, scientists can be prone to errors of elementary logic, and these can often go undetected by the peer review process and have a major impact on the literature — for instance, confusing correlation and causation, or confusing implication with a biconditional. Philosophy can provide a way of understanding and correcting such errors. It addresses a largely distinct set of questions that natural science alone cannot answer, but that must be answered for natural science to be properly conducted.

These questions include how we define and understand science itself. One group of theories of science — the set that best supports a clear distinction between science and philosophy, and a necessary role for each — can broadly be classified as “essentialist.” These theories attempt to identify the essential traits that distinguish science from other human activities, or differentiate true science from nonscientific and pseudoscientific forms of inquiry. Among the most influential and compelling of these is Karl Popper’s criterion of falsifiability outlined in The Logic of Scientific Discovery (1959).

A falsifiable theory is one that makes a specific prediction about what results are supposed to occur under a set of experimental conditions, so that the theory might be falsified by performing the experiment and comparing predicted to actual results. A theory or explanation that cannot be falsified falls outside the domain of science. For example, Freudian psychoanalysis, which does not make specific experimental predictions, is able to revise its theory to match any observations, in order to avoid rejecting the theory altogether. By this reckoning, Freudianism is a pseudoscience, a theory that purports to be scientific but is in fact immune to falsification. In contrast, for example, Einstein’s theory of relativity made predictions (like the bending of starlight around the sun) that were novel and specific, and provided opportunities to disprove the theory by direct experimental observation. Advocates of Popper’s definition would seem to place on the same level as pseudoscience or nonscience every statement — of metaphysics, ethics, theology, literary criticism, and indeed daily life — that does not meet the criterion of falsifiability.

The criterion of falsifiability is appealing in that it highlights similarities between science and the trial-and-error methods we use in everyday problem-solving. If I have misplaced my keys, I immediately begin to construct scenarios — hypotheses, if you will — that might account for their whereabouts: Did I leave them in the ignition or in the front door lock? Were they in the pocket of the jeans I put in the laundry basket? Did I drop them while mowing the lawn? I then proceed to evaluate these scenarios systematically, by testing predictions that I would expect to be true under each scenario — in other words, by using a sort of Popperian method. The everyday, commonsense nature of the falsifiability criterion has the virtue of both showing how science is grounded in basic ideas of rationality and observation, and thereby also of stripping away from science the aura of sacred mystery with which some would seek to surround it.

An additional strength of the falsifiability criterion is that it makes possible a clear distinction between science properly speaking and the opinions of scientists on nonscientific subjects. We have seen in recent years a growing tendency to treat as “scientific” anything that scientists say or believe. The debates over stem cell research, for example, have often been described, both within the scientific community and in the mass media, as clashes between science and religion. It is true that many, but by no means all, of the most vocal defenders of embryonic stem cell research were scientists, and that many, but by no means all, of its most vocal opponents were religious. But in fact, there was little science being disputed: the central controversy was between two opposing views on a particular ethical dilemma, neither of which was inherently more scientific than the other. If we confine our definition of the scientific to the falsifiable, we clearly will not conclude that a particular ethical view is dictated by science just because it is the view of a substantial number of scientists. The same logic applies to the judgments of scientists on political, aesthetic, or other nonscientific issues. If a poll shows that a large majority of scientists prefers neutral colors in bathrooms, for example, it does not follow that this preference is “scientific.”

Popper’s falsifiability criterion and similar essentialist definitions of science highlight the distinct but vital roles of both science and philosophy. The definitions show the necessary role of philosophy in undergirding and justifying science — protecting it from its potential for excess and self-devolution by, among other things, proposing clear distinctions between legitimate scientific theories and pseudoscientific theories that masquerade as science.

In other words, science can’t determine qualities (right or wrong, good or bad, etc.) but only quantities. As such, science can’t even tell whether doing science is important. Such a fatal error at such a crucial juncture in the thought process – i.e. right at the foundations! – does not put scientism in a strong place.

[…] The Folly Of Scientism As Pseudoscientific Theories Masquerade As Science […]

In “On the Ontological Mystery,” [Gabriel] Marcel characterized a mystery as a “problem that encroaches on its own data.” The point is best understood by saying that, in the case of a mystery, the questioner is directly involved in the question and so is unable to separate from it in order to study it in an objective manner (and thereby seek an “objective” solution that would be accessible to everyone). [This should have been implicit in the uncertainty principle.] the realm of mystery, it is not possible to substitute one person for another without altering the question itself. There are… Read more »