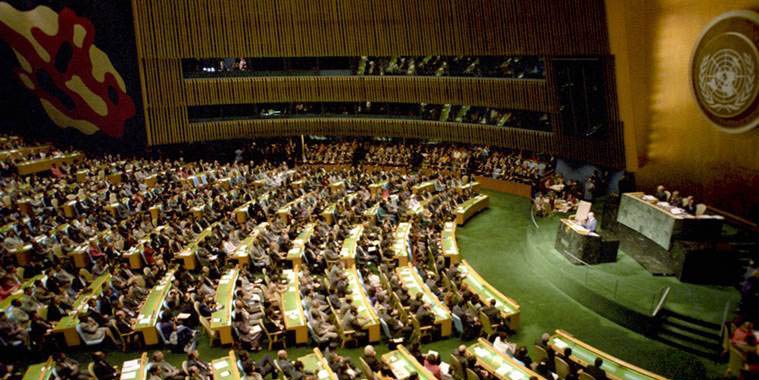 The United Nations is the primary driver of Technocracy on a global basis, through Sustainable Development, Green Economy and Natural Capitalism. It is also notable that  Rockefeller family interests have used the UN for their dream of domination over humanity. ⁃ TN Editor

Alabama Congressman Mike Rogers has introduced a new bill (H.R. 193) to end U.S. membership in the United Nations. The bill is the reintroduction of his American Sovereignty Restoration Act (H.R. 1205) from the last Congress. And of course, that was basically the same bill introduced year after year by former Congressman Ron Paul.

In the past, both Paul’s and Roger’s bills have been ignored by Congress, but things are changing. Americans are beginning to understand the UN threat. Obama has actually stood before the UN General Assembly and called for Americans to surrender our national sovereignty to this world body.

As Obama worked feverishly to build UN intrusion into our lives through actions like Agenda 21 and by joining the UN’s Strong Cities Network to militarize our police, the rest of the world has started to revolt against UN global policies that are destroying their national independence and economies.

The Brexit vote in England was the shockwave heard around the world. The European Union is the first such organization of the UN’s goal to create such unions in every region of the world, including North and South American Unions; an Asian Union and so forth. The EU was to be the wave of the future. England struggled under its shackles until it could no longer stand it and so revolted. As the vote came in suddenly other members of the EU started thinking – if England can escape, why not them? Suddenly the global New World Order juggernaut has begun to show cracks.

Meanwhile France is about to elect its own Trump-style president ready to pull back its global policies as Italy rebels in its own way. Worst of all for the UN globalists, their one excuse for power, Climate Change, is being discredited as President Elect Trump prepares to throw out the Paris Treaty along with the TPP.

However, it was the most recent Obama shenanigans in allowing a massive UN attack on Israel over its settlements in favor of a non-existent Palestine that has created the strongest ever anti-UN sentiment in the U.S. Pulling back on paying UN dues has been expressed by several in Congress as support for such a sentiment has begun to grow across the nation. Without the United States and its money the UN is nothing. It will cease to exist in a very short time, just as did the old League of Nations.

Now, to feed that growing sentiment Congressman Rogers has again introduced the legislative means to make it happen. This time more and more Americans are listening.

To help readers understand why the UN is such a threat to our nation and freedom-loving people everywhere, I am reissuing my opening statement given in a debate over the UN before the 200 year old English debating society, Cambridge Union in 2006. At the time I was debating the former UK Ambassador, Lord David Hanney; the head of the Liberal Party and member of Parliament, Simon Hughes; and the head of the UN Millennium Project, Salil Shetty.

Rep. Mike Rogers’ H.R. 193 must now be seriously considered and passed by Congress. The time is finally here to make a strong stand to get the United States out of the United Nations.

BEFORE THE CAMBRIDGE UNION SOCIETY

“This House believes that the United Nations is a dead loss.”

It is reasonable that honest, compassionate people seek a means for governments to come together to discuss and air their differences.

It is also reasonable that honest, compassionate people should desire some way to voluntarily pool resources to provide charitable aid to those who are starving or are victims of natural disaster.

Indeed this is the image of the United Nations that has been sold to the world since its inception.

It is not, however, the reality.

The world is in chaos and, quite frankly, it’s the UN’s fault. It gives validity to zealots and petty bigots. It helps to keep tyrannical dictators in power. It gives a voice to international terrorists.

Delay. Negotiate. Recommend. Study. Reconsider. Do nothing. This is the game the UN has played in nearly every international crisis.

It is the reason North Korea remains a threat after 50 years.

It is the reason Zimbabwe’s murderous Robert Mugabe is able to steal his election and then steal the land of white property owners, drive the nation into economic ruin and starvation without an international protest, boycott, or sanction. Instead, Mugabe is given a voice in the UN’s Sustainable Development conference in South Africa.

It is the reason why the Chinese government is able to ignore UN rules not to its liking — while growing as an international military and economic threat.

And it is the reason why a terrorist nation like Syria can be given a seat on the UN’s Human Rights Council.

The United Nations, internally, is a mess. It now finds itself buried under scandals.

It has Oil-for-Food scandals. Smuggling scandals. And theft scandals.

Peace keeping missions actually bring fear to the local citizens they are supposed to protect. Rob, rape and pillage seem to be the UN’s modus operandi. How can we be surprised by such revelations?

Who has the power to oversee and control its actions? The people don’t vote on UN actions. The media has little access behind the scenes. Who audits the accounting books?

Of course, even its supporters will readily agree that such problems exist. They are quick to jump in and call for “reform.” However, when talking reform, one must be very careful of what the word may mean.

UN reports on reform don’t indicate a simple desire to plug holes in UN spending — or to clear up scandals. Quite the contrary. According to Kofi Annan, Maurice Strong and many others, reform means global governance.

Since its inception, the UN has advocated the desire to eradicate sovereign nations — while imposing what it calls “world-mindedness.” A 1949 UNESCO document said, “nationalism (is) the major obstacle to the development of world-mindedness.” In the 1990’s, Maurice Strong said, “it is not feasible for sovereignty to be exercised unilaterally by individual nation/states, however powerful.”

There in lies the true goal of the United Nations. And that belies its public image as simply a place where nations may come to air their differences and act responsibly. Instead, the UN is openly working to gain power for itself in order to become independent and supreme over its member nations.

To do that it needs the power to tax. On September 19th (2006) plans were approved to begin the creation of a global tax, mostly through airline tickets to help pay for the treatment of aids. They of course euphemistically call it a contribution.

There are several other tax schemes on the UN wish list, including a carbon tax on Co2 emissions, a currency tax on transactions of foreign currency exchanges, and taxes on the Internet, to name a few. If the UN gains the power to tax and the enforcement power necessary to collect them, then the UN will become an unstoppable force in the world. A monster free from its chains.

And, of course, the UN wants its own military. It already has its own court.

These three things; the ability to collect taxes to provide nearly unlimited funds from independent sources; the ability to enforce its will with a military force; and a court system to impose its own brand of justice, are all that is required to create a government.

Imagine a world run by the justice of China, with the economics of Cuba and the military might of the United States. Such is the world of the future under United Nations global governance.

Public relations propaganda aside, clearly, the United Nations wants to be much more than a place where nations can come together to air their differences under a voluntary membership association.

The truth is, today, fifty years after the inception of the United Nations, the international community is a dangerous place. Today the world has more wars, more poverty and more suffering that anytime in human history.

Obviously, the United Nations is irrelevant as a body to deliver world peace. Just as obviously, the UN is more interested in meddling in the sovereign affairs of nations, seeking to impose its own agenda over development, production and what it calls social equity in a drive to set itself up for global governance.

Using images of dire environmental emergencies or life-threatening diseases or starving children, the UN promotes an agenda which really seeks to redistribute the world’s wealth. Its only answer is government control – and confiscation of individual wealth and property.

Nowhere is there mentioned in a single UN document that I have read an advocacy for the right to own private property. In fact, quite the opposite is the case as nearly every UN document, report, working paper, program, treaty, protocol, declaration and resolution is dedicated to the confiscation, redistribution, regulation and tax of someone’s property.

It is a fact that the inability to own private property creates poverty. It is also a fact that confiscation of private property never helps to eradicate poverty. It is bad economic policy. Yet that is the UN’s only solution to the massive suffering throughout the world. Take it from one source to give to another. And that, I contend, is the very root of the suffering – not the solution.

The UN was wrong from its very beginning and wrong now because it has always sought to interfere with national sovereignty rather than to provide a unique forum to help keep the peace.

The United Nations is not “dysfunctional” as some “reformists” have claimed. It is a criminal enterprise in which no moral nation should ever participate, let alone perpetuate.

A native of Ohio, he’s been a candidate for the Ohio Legislature, served as editor of two newspapers, and has owned several businesses since the age of 23. In 1989 Tom led the only privately-funded election-observation team to the Panamanian elections. In 2006 Tom was invited to Cambridge University to debate the issue of the United Nations before the Cambridge Union, a 200 year old debating society. Today he serves as Founder and President of the American Policy Center and editor of The DeWeese Report.

For 40 years Tom DeWeese has been a businessman, grassroots activist, writer and publisher. As such, he has always advocated a firm belief in man’s need to keep moving forward while protecting our Constitutionally-guaranteed rights.

It was UN Women and their brand of hateful, radical feminism that first alerted me to the UN’s danger.