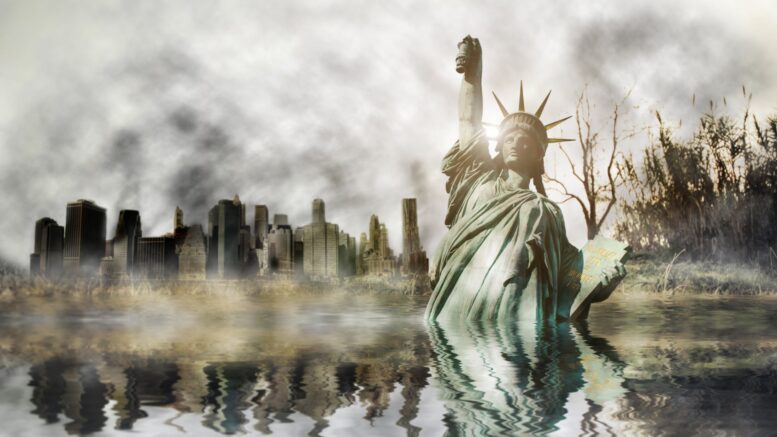 Please Share This Story!
PDF 📄
Life was good in early January 2020. Then, just like that, everything turned upside down and the whole world catapulted into a scientific dictatorship run by pseudo-scientists, Technocrat engineers and incompetent computer geeks. Welcome to 1984. ⁃ TN Editor

Once it became clear to the Western elite that their subjects would readily accept draconian anti-Covid measures, it encouraged them to usher in a code-red lifestyle where there will be no ‘return to normal’ in the foreseeable future and, possibly, never.

If nothing else, nobody can say we were not warned about the madness that would descend upon leap year 2020, making it one of the worst 366 days ever recorded on the Gregorian calendar.

On October 18, 2019, the Johns Hopkins Center for Health Security, together with the World Economic Forum and the Bill and Melinda Gates Foundation hosted the incredibly visionary Event 201, an exercise that simulated the outbreak of a pandemic “transmitted from bats to people that eventually becomes…transmissible from person to person.”

The simulation proved to be so uncannily similar to the real thing that started just three months later – from imagining a dramatic drop in air travel and business, to breaks in the global supply chain – that Johns Hopkins eventually felt compelled to release a statement saying their exercise was not intended to be a prophecy of future events.

“To be clear, the Center for Health Security and partners did not make a prediction during our tabletop exercise,” the statement read, in what just might be the creepiest caveat ever. “For the scenario, we modeled a fictional coronavirus pandemic, but we explicitly stated that it was not a prediction… We are not now predicting that the nCoV-2019 outbreak will kill 65 million people.”

Shortly after the global elite played Nostradamus, on January 15th to be exact (the very same day, incidentally, that the Democrats presented articles of impeachment against President Donald Trump in the Senate), the first Covid-positive person arrived in Seattle from Wuhan, the Chinese city where the disease is said to have sprung to life. From there it has been a non-stop roller-coaster ride of government-sponsored insanity.

Before continuing, it is important to remember the context with which the pandemic has been happening, that is, in the most consequential U.S. presidential election in recent memory. It should thus come as no surprise that the Democrats and Republicans would use the scourge to achieve some sort of advantage, demonstrating Machiavellian opportunism at its very best. Indeed, such is the nature of the political beast.

For example, although Trump shut down the U.S. border on January 31 to Chinese nationals, the Democrats and leftist media pounced, saying the U.S. leader responded too late to make a difference. Even Trump’s use of the term ‘Chinese virus’ was slammed by his opponents as ‘racist.’ Meanwhile, it was the Democrats themselves who were the pioneers in taking the first draconian steps of locking down society to stop the contagion.

On March 16, 2020, six counties in northern California and the city of Berkley ordered an unprecedented stay-at-home order for some 7 million Bay Area residents. This was all part of “flattening the curve” logic that would “buy time for hospitals to gear up for the onslaught…” Well, 233 days later political leaders are not only still flattening the curve, but flattening their economies as well. Today, although the survival rate for those infected with Covid-19 is reported to be in the neighborhood of 99.85 percent, harsh lockdowns continue to wreak havoc, not least of all for small businesses.

Consider the situation in California, where Governor Gavin Newsom has mandated yet another ‘shelter-in-place’ order, which has shuttered, among other businesses, hair salons, barbershops, personal care services, movie theaters, wineries, bars, breweries, family entertainment centers and amusement parks. What is hard to fathom, however, is how the corporate big-box stores are considered “essential businesses,” apparently immune to the scourge, while the small business owner is trashed as expendable.

By way of example, consider the tragic plight of Angela Marsden, the owner of Pineapple Hill Saloon and Grill in Los Angeles. In an effort to comply with the ever-changing anti-Covid rules, Marsden spent over $80,000 to build an outdoor patio so she could stay in business during the pandemic. With Newsom’s latest lockdown restrictions, however, city officials denied her permission to serve clients on location, even in the parking lot.

To add insult to injury, the authorities granted permission for a film company to set up a large outdoor eating area for its staff just across the road from where Marsden had built her patio.

“I’m losing everything,” she exclaimed in a video posted to Twitter that has been watched almost 10 million times. “Everything I own is being taken away from me. They have not given us money and they have shut us down. We cannot survive; my staff cannot survive…”

For the Fortune 500 companies, however, the pandemic has translated into a windfall. Between April and September, at a time when thousands of small business were quietly getting crushed underfoot, 45 of the 50 most valuable publicly traded American companies turned a profit, according to the Washington Post.

At the same time, at least 27 of the 50 largest firms slashed their workforce this year, collectively cutting more than 100,000 workers, while at the same time distributing billions of dollars to shareholders. As just one example, Walmart distributed more than $10 billion to its investors during the pandemic while terminating 1,200 office staff.

To put these figures another way, since mid-March – when President Donald Trump declared a national emergency – America’s 614 billionaires saw their net worth explode by $931 billion in total. Jeff Bezos, for example, the founder and chief executive of Amazon, saw his private wealth go from $73.2bn since the start of the crisis to a record $186.2bn.

It would probably come as no surprise that the very individuals who helped pave the way for astronomic wealth generation among the 1 percent, are the same ones breaking their own rules. Governor Newsom and his wife, for example, attended a birthday party with a dozen friends at the French Laundry restaurant in San Francisco. Equally maddening is that Dustin Corcoran, the CEO of the California Medical Association, was also in attendance. And who could forget the photo of Nancy Pelosi walking through a California hair salon when such businesses were deemed ‘super spreaders’?

Such incidences only served to reinforce the idea that the draconian lockdowns, the worst of which are centered on Democratic-controlled states, were specifically designed not to contain a contagion, but to foster as much anger and frustration among the general population in the most consequential presidential election in many decades. After all, unhappy people have a tendency to vote out their leaders whom they believe are responsible for such dire circumstances. And with the mainstream media almost totally in the Democratic anti-Trump camp, placing the blame on the president has proven no difficult task.

So where do we go from here? Now that we have reached the end of 2020, will the situation begin to improve? Will political leaders begin to loosen the screws and let some semblance of normality return once again? Or will people be forced to rise up and demand the return of their freedom and liberty?

At this great loggerhead in human history, there has been much talk about creating ‘freedom passes’ that will be demanded from people before they are allowed to travel or visit any sort of entertainment again.

“People who test negative for coronavirus could get a five-day freedom pass to attend big events or access public buildings, under plans being considered by public health experts running a trial program in England,” reported Bloomberg in November.

Already, five global airlines – United Airlines, Lufthansa, Virgin Atlantic, Swiss International Air Lines and JetBlue – have announced they will observe the so-called CommonPass to passengers on some flights from December.

“The project, developed by non-profit group The Commons Project and backed by the World Economic Forum, uses a digital certificate downloaded to a mobile phone to show a passenger has tested negative for Covid-19,” according to the Financial Times. Here is the kicker: “The airlines are not making the CommonPass mandatory, but in time it will also be used to provide proof of vaccination.”

It seems rather obvious where all of this is heading: mandatory vaccination for anyone who ever wishes to board an aircraft or visit another entertainment venue again. Over time, it is not difficult to imagine a vaccine regimen extending to all human activities, including shopping and even getting a job. Yet what about the millions of people who have expressed extreme skepticism in being administered a vaccine that has been developed so quickly?

Whatever the case may be, should such a plan of action become mandatory, peoples’ lives will be entirely dominated by fears over a virus, together with an endless bureaucratic process of being tested and approved to move about. Vaccines will become a regular requirement since viruses are in a state of constant mutation, which makes them the authoritarians dream instrument of domination.

Such a system of totalitarian control, should it ever come into fruition, will have achieved in mere months what fascism could not in years: the pacification and unification of a great swath of the world’s population not by bayonet, but by syringe. In fact, today the people of London are fleeing their fair city not out of fear of the virus per se, but out of fear of the lockdown restrictions put in place by the authorities. To put it otherwise, the world gave an inch and the globalists took a mile, and a person would have to be a fool to believe it could have turned out any other way.

We didn’t lose anything. Our common sense, courage and liberties were censored and stolen at every turn. We’ve been bullied, abused and yelled at to the point that fear took over. I protest by not wearing a mask anywhere and blogging. At least I’m doing something. The rest are languishing in their easy chairs, complaining, and whining. What’s it going to take to get people to make these politicians accept responsibility for what they are doing to the country – specifically our economy.

If you can move beyond name-calling, we might be able to get somewhere. Your information is correct, your name calling isn’t helpful. There are smart people who call themselves liberals, democrats, socialists, republicans, conservatives, and most are NOT INTO this plandemic. The more you make this perspecitve a “republican” stance, the fewer people will want join the fight. Be inclusive, stealing our liberties is a problem for ALL OF US.

People with Common Sense, Courage And Civil Liberties don’t vote for a master. Stop your whining.”Free election of masters does not abolish the masters or the slaves.” Herbert Marcuse