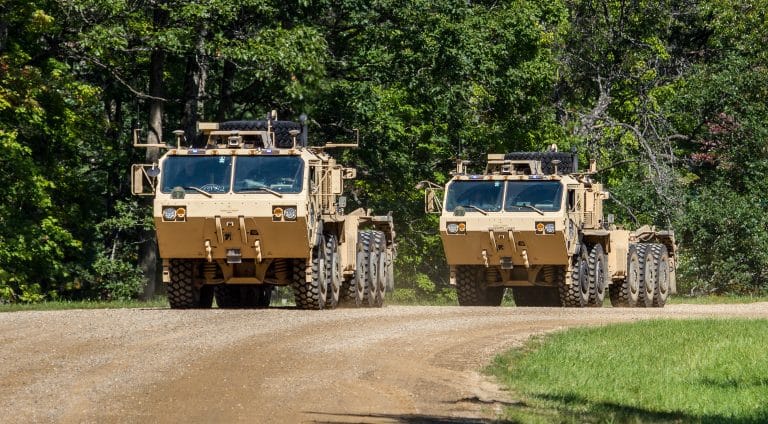 Technocrats and military are perfectly symbiotic: the Army wants a new engineering marvel and Technocrats are excited to deliver. In this case the Army is skipping normal acquisition procedures to rush implementation. What’s the hurry? The global robotic arms race is far larger than anything seen in history. ⁃ TN Editor

After a decade and a half of development, the Army has decided to forgo normal acquisition procedures and field leader-follower robotic truck convoys by 2019, a service official said Aug. 22.

The trucks will be split between two Army companies and be used in operational field tests in the United States, he said. Leader-follower concepts usually have one manned vehicle in front of the convoy with the rest of the trucks following autonomously without drivers.

The number of trucks outfitted with the technology will depend on timing and funding, he said. “We just know we have to get a good amount of trucks out into the soldiers’ hands quickly,” he said.

The Army first began experimenting with the concept at the outset of the Iraq War when roadside bombs caused high casualties. The initial concepts had one soldier remaining in the vehicle, but not driving unless needed, thus reducing the number of potential victims. However, the potentially lifesaving technology never reached the warzone.

Senior Army leaders determined that if they were to follow normal acquisition steps, it would take five to seven years to field leader-follower trucks. They “decided that wasn’t good enough,” Ernat said. They were fine with an 80 to 85 percent solution, he said.

“It’s not just the technology that is important to develop, it’s how those soldiers use them and how they change how they fight,” he said. “The quicker we can get those in the hands of the soldiers to figure that out, the better.”

One factor preventing robotic convoy technology from reaching the field over the years was the high cost of the kits that would convert ordinary trucks into robotic vehicles, TARDEC officials have said.

Costs have come down dramatically over the past decade and the technology has advanced, especially with the advent of semi-autonomous and fully autonomous vehicles in the commercial market, Ernat said.

“I think everybody knows what the auto companies are doing right now. There have been a lot of breakthroughs in the drive-by-wire technology,” Ernat said. He did not know offhand how much the kits currently cost per vehicle.

TARDEC is working with Oshkosh Corp. — manufacturer of the PLS trucks — Lockheed Martin and Robotic Research LLC. to convert the vehicles, he said.

The Army wants to move away from developing a technology for five years and then having it fail to transition to a program of record. TARDEC is using open software architectures to make incremental improvements on robotic systems. That allows government or industry to create plug-and-play features, he said.

One example would be software that would autonomously back up a trailer, Ernat said.

“As long as they are working in that open architecture and open framework, we can plug and play those technologies into the existing software,” he said. The software for the logistical vehicles can then make the transition to the combat side, where the Army is looking at robotic wingman concepts, he added.