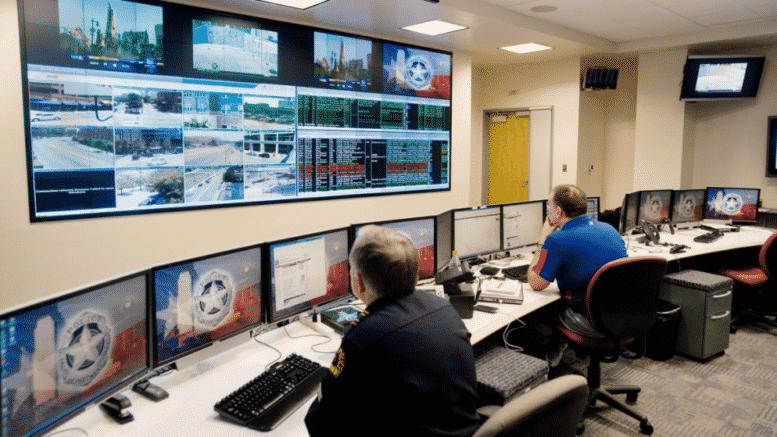 Please Share This Story!
PDF 📄
The surveillance-crazed Department of Homeland Security has apparently turned the United States Postal Service into a clandestine source of intelligence information that feeds directly to local intelligence units called Fusion Centers. This completes the web of surveillance in America. ⁃ TN Editor
Yahoo News revealed that the law enforcement arm of the U.S. Postal Service has been secretly tracking and collecting Americans’ social media posts.
“The details of the surveillance effort, known as Internet Covert Operations Program (iCOP), have not previously been made public. The work involves having analysts trawl through social media sites to look for what the document describes as inflammatory postings and then sharing that information across government agencies.”

DHS has succeeded in turning the Postal Service into a clandestine government agency.

“iCOP analysts are currently monitoring these social media channels for any potential threats stemming from the scheduled protests and will disseminate intelligence updates as needed, the bulletin says.”All of this really shouldn’t come as a surprise; a 2019 USPIS annual report revealed the existence of iCOP, albeit in less ominous terms.

Page 36 of the report says iCOP is one of seven functional groups that send hundreds of intelligence reports to fusion centers.

“The Internet Covert Operations Program (iCOP) is one of seven functional groups within the Inspection Service Cybercrime program. In Fiscal Year 2019, the iCOP team produced a total of 209 Intelligence Reports to the field in support of investigations involving narcotics, mail theft, revenue fraud, homicide, dangerous mail, and more.”

A 2019 Federal News Network article revealed how iCOP postal inspectors have been going ‘undercover’ on the dark web since at least 2014.

“So when it comes to doing online undercover work, our biggest challenge is — since our program is fairly new, going back to 2014 — trying to establish that long term persistence and that long term identity and in enabling the visibility of the user identity over a long period of time to build that reputation, build the street creds, if you will. Because you don’t have that face to face interaction, because the bad guys are going to apply the same principles and tactics do their own assessment,” Michael Ray, inspector in charge of cybercrime and analytics at the U.S. Postal Inspection Service said.

In his interview, Ray revealed that iCOP might have been surveilling people’s social media posts since at least 2014.

“So when you had face-to-face transactions, you didn’t have a public ledger, you didn’t have open source information. You had to go through [the Treasury Department’s Financial Crimes Enforcement Network] and get suspicious activity reports. You had to look at bank records that were subpoenaed”… Ray said.

The term “open source information” is just the government’s way of saying monitoring electronic communications or social media posts. It appears that Ray may have inadvertently admitted that the Postal Service was monitoring people’s social media posts as far back as 2014.Most American’s will find it hard believe that one of it’s most-trusted federal agencies has been turned into a militarized arm of the Feds.

In 2019, DHS also began using local post offices to create a national biometric criminal background check program.
In 2019, the USPS innocuously began installing fingerprint scanners in post offices so they could scan potential employees. The USPS used fingerprint scanners and the National Agency Check with Inquiries (NACI) to conduct in-depth background checks.”
The following year the Postal Service began working with the FBI to provide fingerprinting services to the public at more than 100 post offices across the country. By 2021, the Federal News Network announced the Postal Service’s five-year plan to expand their biometric criminal background check program to more than 4,000 post offices.

A PR Newswire news release described it as a nationwide biometric network.

“This award (DHS grant) will enable the Postal Service to further leverage its nationwide retail network and information infrastructure to better serve federal agencies and the American public through broader access to biometric capture and in-person proofing services.”

From photographing and scanning everyone’s letters for law enforcement to social media spying and creating a national biometric network, DHS has managed to turn the USPS into another spy agency, complete with its own police force.

Please share widely. I’m on yet another 30 day FB suspension. LOL
The April 24th London Protests and the coming war between Individualism and Global Collectivism
https://www.youtube.com/watch?v=YMJM2iKtUOQ

Bush the one who started DHS said here the pope was God: https://www.youtube.com/watch?v=lk5PKxglj88 The head of the DHS appointed by Biden is Jesuit trained (Loyola Jesuit Law School). His name is Alejandro Mayorkas who came here from Cuba in late 50’s with parents obviously after Cuba Revolution. He was born in Nov. 1959. How could people come to America in 1959 ish from Cuba and live in Beverly Hills where Alejandro Mayorkas attended Berkeley and Loyola Jesuit law school (according to wiki)? His father is said to have attended Ruston Academy Cuba, and then Dartmouth, but when one looks at… Read more »