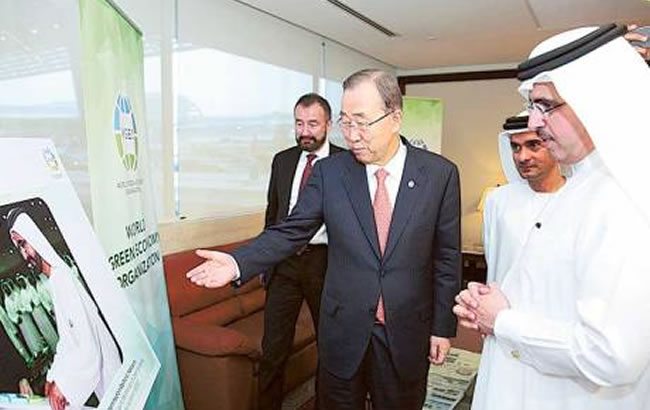 Arab states have a close connection to Technocracy and the UN’s Green Economy. Dubai, UAE, Saudi Arabia and even Iran are eager participants. The connection is not obvious to the Western mind, but Islam is very ‘green’ and the Koran attributes 12 percent of its text to green issues. ⁃ TN Editor

Ban Ki-moon, Secretary-General of the United Nations, praised the UAE for being the first member to join the World Green Economy Organisation (WGEO).

He also commended the insightful vision of His Highness Shaikh Mohammad Bin Rashid Al Maktoum, Vice-President and Prime Minister of the UAE and Ruler of Dubai, for supporting sustainability and the global green economy and launching the WGEO with its permanent headquarters in Dubai.

In a meeting with Saeed Mohammad Al Tayer, Chairman of the World Green Economy Organisation (WGEO), Ban Ki-moon was briefed on the key achievements and joint cooperation between the United Nations and the WGEO.

“Joined by the UAE as its first member country, [the] WGEO will support the implementation of the Paris Agreement on climate, and increase global awareness on climate change to enhance the shift towards a green economy,” he said in a statement on Sunday.

The strategy consists of many initiatives, including the Mohammad Bin Rashid Al Maktoum Solar Park which is the largest single-site solar park in the world, with a planned capacity of 5,000 megawatts by 2030 and an expected investment of $13 billion (Dh47.8 billion).

The emirate of Dubai is working on the reduction of carbon emissions in line with Dubai Carbon Abatement Strategy to reduce carbon emissions by 16 per cent by 2021. It is also working on the implementation of the energy and water demand-side management strategy to enhance Dubai’s position as the city with the lowest carbon fingerprint worldwide while reducing demand to 30 per cent by 2030.