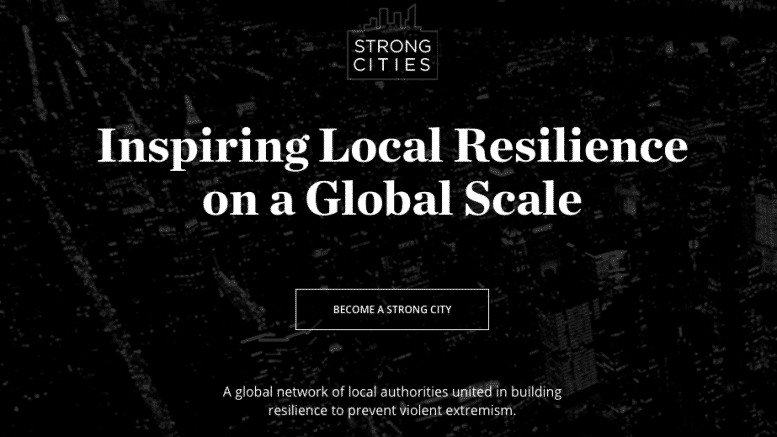 TN Note: This is a brand new initiative at the United Nations involving cities, data sharing, new governance structures and more. As such, it should be watched carefully because it is likely to spread around the world like wildfire. Bold type is inserted below to highlight key features that might be alarming to those who study such things. The entire initiative is going to be run by an NGO called the Institute for Strategic Dialogue, or ISD.

From the Office of the Attorney General, Department of Justice

WASHINGTON – Cities are vital partners in international efforts to build social cohesion and resilience to violent extremism.  Local communities and authorities are the most credible and persuasive voices to challenge violent extremism in all of its forms and manifestations in their local contexts.  While many cities and local authorities are developing innovative responses to address this challenge, no systematic efforts are in place to share experiences, pool resources and build a community of cities to inspire local action on a global scale.

“The Strong Cities Network will serve as a vital tool to strengthen capacity-building and improve collaboration,” said Attorney General Loretta E. Lynch.  “As we continue to counter a range of domestic and global terror threats, this innovative platform will enable cities to learn from one another, to develop best practices and to build social cohesion and community resilience here at home and around the world.”

The Strong Cities Network (SCN)  – which launches September 29th at the United Nations – will empower municipal bodies to fill this gap while working with civil society and safeguarding the rights of local citizens and communities.

The SCN will strengthen strategic planning and practices to address violent extremism in all its forms by fostering collaboration among cities, municipalities and other sub-national authorities.

“To counter violent extremism we need determined action at all levels of governance,” said Governing Mayor Stian Berger Røsland of Oslo while commenting on their participation in the SCN.  “To succeed, we must coordinate our efforts and cooperate across borders.  The Strong Cities Network will enable cities across the globe pool our resources, knowledge and best practices together and thus leave us standing stronger in the fight against one of the greatest threats to modern society.”

The SCN will connect cities, city-level practitioners and the communities they represent through a series of workshops, trainings and sustained city partnerships.  Network participants will also contribute to and benefit from an online repository of municipal-level good practices and web-based training modules and will be eligible for grants supporting innovative, local initiatives and strategies that will contribute to building social cohesion and resilience to violent extremism.

The SCN will include an International Steering Committee of approximately 25 cities and other sub-national entities from different regions that will provide the SCN with its strategic direction.  The SCN will also convene an International Advisory Board, which includes representatives from relevant city-focused networks, to help ensure SCN builds upon their work.  It will be run by the Institute for Strategic Dialogue (ISD), a leading international “think-and-do” tank with a long-standing track record of working to prevent violent extremism:

“The SCN provides a unique new opportunity to apply our collective lessons in preventing violent extremism in support of local communities and authorities around the world”, said CEO Sasha Havlicek of ISD.  “We look forward to developing this international platform for joint innovation to impact this pressing challenge.”

“It is with great conviction that Montréal has agreed to join the Strong Cities Network founders,” said the Honorable Mayor Denis Coderre of Montreal.  “This global network is designed to build on community-based approaches to address violent extremism, promote openness and vigilance and expand upon local initiatives like Montréal’s Mayors’ International Observatory on Living Together.  I am delighted that through the Strong Cities Network, the City of Montréal will more actively share information and best practices with a global network of leaders on critical issues facing our communities.”

The Strong Cities Network will launch on Sept. 29, from 4:00 p.m. to 5:30 p.m. EDT, following the Leaders’ Summit on Countering ISIL and Violent Extremism.  Welcoming remarks will be offered by the United Nations High Commissioner for Human Rights, Prince Zeid Ra’ad Al Hussein and Mayor Bill de Blasio of New York City, who will also introduce a Keynote address by U.S. Attorney General Lynch.  Following this event, the Strong Cities International Steering Committee, consisting of approximately 25 mayors and other leaders from cities and other sub-national entities from around the globe, will hold its inaugural meeting on Sept. 30, 2015, from 9:00 a.m. to 4:00 p.m. EDT.