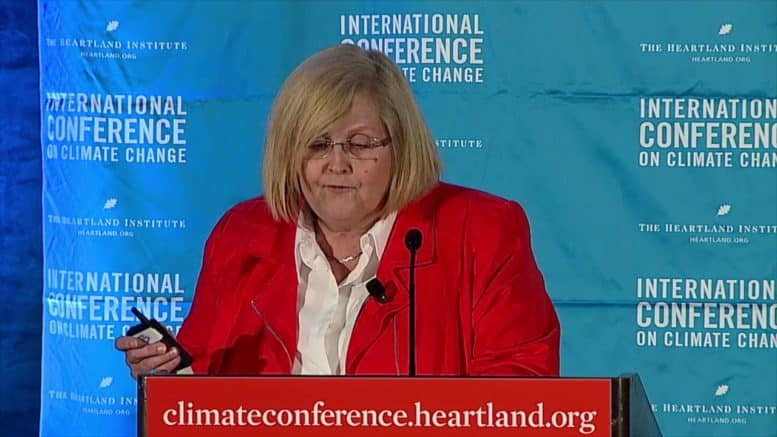 Posted By: Valerie Richardson via The Washington Times October 30, 2019

Please Share This Story!
PDF 📄
The religion of Scientism infects Technocrats to substitute pseudo-science for real science and blame everyone else for the results. Polar bears do not face extinction because of man-made global warming as is claimed by climate hysterics. ⁃ TN Editor

Nobody has done more to sink the claim that climate change is endangering polar bears than zoologist Susan Crockford — and she may have paid for it with her job.

After 15 years as an adjunct assistant professor, Ms. Crockford said the University of Victoria rejected without explanation in May her renewal application, despite her high profile as a speaker and author stemming from her widely cited research on polar bears and dog domestication.

Ms. Crockford accused officials at the Canadian university of bowing to “outside pressure,” the result of her research showing that polar bear populations are stable and even thriving, not plummeting as a result of shrinking Arctic sea ice, defying claims of the climate change movement.

Her dismissal, which she announced Wednesday in a post on her Polar Bear Science blog, has spurred alarm over the implications for academic freedom and the rise of the “cancel culture” for professors and scientists who challenge climate catastrophe predictions.

“When push came to shove, UVic threw me under the bus rather than stand up for my academic freedom,” said Ms. Crockford, who earned a Ph.D. in interdisciplinary studies, specifically biology and anthropology, in 2004.

Ms. Crockford cited numerous instances of the university promoting her interviews and work, including her participation in a 2007 PBS “Nature” documentary about dog domestication and evolution, as well as her appearances at K-12 schools and adult groups for 10 years through the University of Victoria Speakers Bureau.

That supportive climate changed two years ago. In May 2017, her lectures were shut down after the speakers bureau received a complaint about her “lack of balance,”

“The speakers’ bureau incident made it clear the administration had no intention of protecting my academic freedom against complaints from outside the university,” Ms. Crockford said in an email to The Washington Times.

UVic Associate Vice President Michele Parkin responded with a letter challenging the assertion that Ms. Crockford was let go for “telling school kids politically incorrect facts about polar bears.” She was referring to a recent headline in the National Post of Toronto.

“There is no evidence to suggest that Dr. Crockford’s adjunct appointment was not renewed for ‘telling school kids politically incorrect facts about polar bears,’” said Ms. Parkin. “The University of Victoria, in both word and deed, supports academic freedom and free debate on academic issues.”

The statement fell short of denying that Ms. Crockford’s dismissal was linked to her polar bear scholarship, which almost single-handedly blew up the climate change movement’s promotion of the bears as iconic victims of anthropogenic global warming.

Her books include “The Polar Bear Catastrophe That Never Happened,” published in February, in which she said the bears are not threatened. She noted that the International Union for Conservation of Nature’s 2015 Red List of Threatened Species puts polar bear numbers at 22,000 to 31,000 despite a widespread belief that the population has dropped to a few thousand.

The resistance to the truth in academia is just one more area of the onslaught by progressives and their kind upon critical thinking and real science. Attacks can be seen everywhere from politics and religion to media and academia and more. People are faced with either fighting the good fight by acting as normal people would to obstruction and oppression or succumbing and giving up for fear of loss of jobs and more. Valerie Richardson is obviously a person who likes to be able to live with herself and sleep at night.

Well, comrade, this is what you can expect if you go against the nuts on the left. They don’t just argue against the study – they fire you. The only reason the left bothers to call things “studies” is for the government (and you wasted tax dollars) funding. After all – those advanced degrees in finger nail clipping don’t get the 6 figure jobs they used to. Ya gotta get a gommet grant to live well and prosper.

…“The University of Victoria, in both word and deed, supports academic freedom and free debate on academic issues,” said Ms. Parkin.

Well, Ms. Parkin YOU ARE A LIAR. Of course, you know already that everyone who reads this info, even those who would side with your ‘belief system’, knows you are lying and that your university is blocking unwanted concepts, ideas and valid research simply to forward a political agenda. YOU ARE A VERY SAD PERSON and a

I will remember your name.